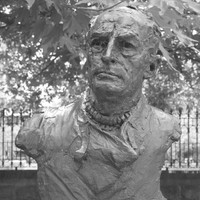 The Antarctic exploits of Sir Douglas Mawson (1882–1958) rival those of Robert Scott and Ernest Shackleton. His bust in the Prince Henry Gardens, outside the University of Adelaide, commemorates the life and work of an outstanding scientist and explorer.

Mawson was born in Yorkshire, England in 1882 and migrated to Sydney with his family in 1884. In Sydney he studied for degrees in engineering (mining, 1902) and science (geology, 1905). His first experience of scientific exploration came with a geological survey of the New Hebrides (Vanuatu) in 1903. Mawson’s subsequent report constitutes one of the earliest works on the geology of Melanesia. During this period Mawson also developed what was to be a long-standing interest in radioactive minerals.

In 1905 Mawson took up the position of lecturer in mineralogy and petrology at the University of Adelaide. He also commenced studies of the glacial geology of South Australia and investigated the highly mineralised Precambrian rocks of the Barrier Range, northern Flinders Ranges to Broken Hill, New South Wales. He was awarded a Doctorate in Science in 1909 for a geological study around Broken Hill. Mawson’s continuing interest in radioactivity led him to identify and first describe the mineral davidite in specimens from the area now known as Radium Hill. This deposit was the first major radioactive ore body discovered in Australia.

In late 1907 Mawson joined Shackleton’s Expedition to Antarctica (1907–09) with a view to furthering his understanding of glaciation and its geological consequences. Although his focus was on scientific enquiry, Mawson showed strong leadership qualities and great stamina in the harsh Antarctic environment. He was one of the first party to climb Mount Erebus in March 1908. TW Edgeworth David, Alistair Mackay and Douglas Mawson hauled sledges 2028km to reach the South Magnetic Pole in Victoria Land on 16 January 1909.

Not long after returning to South Australia, Mawson began organising a scientific expedition of his own. The Australasian Antarctic Expedition, led by Mawson, sailed from Australia in December 1911. This major scientific expedition, involving biological, geological, meteorological and magnetic surveys, operated from bases constructed on Macqaurie Island, Shackleton Ice Shelf and Commonwealth Bay. By the summer of 1912, preparations to launch expeditions from each base were complete.

Mawson led the Far Eastern Expedition which included Belgrave ES Ninnis and Xavier Mertz. Their journey would prove to be one of tragedy and endurance. Nearly 500km out from base, Ninnis with a sled and supplies disappeared into a crevasse. Mertz died of malnutrition on the long trek back. For the next 30 days Mawson trudged 160km starving and alone. As he approached Main Base Mawson saw the expedition ship Aurora leaving. Too late to catch the vessel, Mawson remained at Commonwealth Bay for another year with the small group who had volunteered to search for him. During this time he wrote The home of the blizzard, later illustrated with the outstanding photographs of the expedition’s photographer Frank Hurley. The 22 volumes of reports from the Australasian Antarctic Expedition were not completed until 1947.

Mawson was knighted in 1914 and awarded an OBE in 1920. He served in a scientific capacity during the First World War. In 1923 he became a committee member of the Australian War Museum (Memorial). Following the war he returned to the University of Adelaide where, as professor of geology and mineralogy from 1921, he conducted research and fieldwork, especially in the Flinders Ranges, until retirement.

Sir Douglas Mawson led two further expeditions to Antarctica (1929–30 and 1930–31). During these expeditions much of the coast was mapped for the first time. This work contributed to the federal Australian Territory Acceptance Act 1933, which enabled the establishment of the Australian Antarctic Territory in 1936. Mawson also lobbied for government control of Antarctica and islands south of Australia and called for controls on whaling. He was influential in Macquarie Island being declared a sanctuary.

Mawson received numerous honours. The first permanent station on Antarctica was named Mawson Base to acknowledge his contribution to scientific exploration on the continent. The University of Adelaide established the Mawson Institute of Antarctic Research in 1959 and created a Douglas Mawson Chair of Geology in 1983.

In 1981 Dr Fred Jacka of the Mawson Institute suggested erecting a commemorative bust. The idea was taken up by the Adelaide City Council and Lord Mayor Dr Jim Watson launched a public appeal for funds. The unveiling of the bust coincided with the Fourth International Symposium on Antarctic Earth Sciences in August 1982, which was brought forward two years and held in Adelaide to mark the centenary of Mawson’s birth.

The unveiling was part of the symposium’s opening ceremonies. Lord Mayor Watson made the presentation and Sir Mark Oliphant, a friend of Mawson, unveiled the memorial.

The bronze bust, mounted on a marble base, was sculpted by John Dowie AM. A boulder is located on each side of the bust. The eastern boulder is of pegmatite from Mawson Valley, Arkaroola, Flinders Ranges. Pegmatite is a crystalline, intrusive igneous rock composed of generally large interlocking crystals. It frequently contains rare earth minerals and gemstones. The western boulder is of charnoktite, from Mawson, Antarctica. Charnocktite is a group of igneous rocks or an assemblage of rock types found across the southern hemisphere. The bust has a twin at Mawson Base. 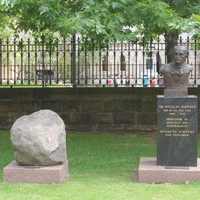 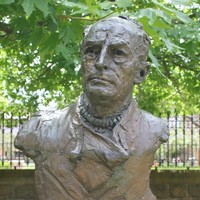