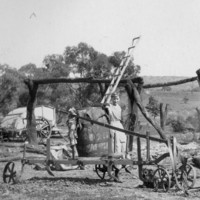 First European attempts at grain, vegetable and fruit growing in the colony
1843

Use of River Murray water for irrigation commences
1927

The Aboriginal peoples of what became South Australia lived in ‘hunter-gatherer’ groups. Their principal management tool for ensuring an adequate supply of native plants and animals was the selective use of fire. In 1836 the first European settlers brought with them their agricultural practices of cultivating the soil, growing grain, fruit and vegetable crops and rearing animals. South Australian agriculture commenced in the following year on the Adelaide plains, Fleurieu Peninsula, the Barossa Valley and north to Clare. Large pastoral holdings expanded from those initially established in the South East and the hill country of the Mid North. By 1845 a South Australian population of 22 460 had 7700 hectares of wheat, 45 hectares of vines, 120 hectares of other horticulture, 1800 horses, 56 000 cattle and 600 000 sheep.

Agriculture and Settlement: Opening up the Country

When the previously prosperous pastoralists were stricken by drought between 1864 and 1866, the surveyor-general George Goyder established a line north of which pastoralists might receive government assistance. Goyder’s Line came to be seen as the point beyond which arable agriculture should not proceed.

To encourage closer settlement and the spread of agriculture rather than large pastoral holdings, Strangways Act (1869) provided government loans to small-holders with 20% deposit, facilitating land purchases on credit. Wheat cropping rather than mixed farming predominated, aided by the development in 1843 of Ridley’s stripper, and a government policy to provide wheat-growers access to a port or railway within 24km of their properties.

Following good seasons in 1870–75, settlement spread beyond Goyder’s Line, initially to Carrieton, extending over the adjacent Willochra Plain and up to Hawker in the Flinders Ranges, encouraged by the notion that ‘rain follows the plough’. By 1879 the state had 560 000 hectares of wheat and six million sheep. Despite the opening of a developmental railway beyond Quorn to Government Gums (Farina) in 1882, a prolonged run of dry seasons from 1880–1881 soon caused settlers to retreat.

In the lower South East large areas were naturally flooded for up to five months of the year. Drainage works began in 1863 by cutting a large drain through the Woakwine Range to nearby Rivoli Bay. Further work continued until about 1880. New main drains were constructed between 1910 and 1920, bringing a large area of highly fertile country into production, although debate continues as to whether some areas were ‘over-drained’.

From 1917 returned soldiers could be allocated blocks for irrigated horticulture at Berri, Chaffey, Cadell and Cobdogla. Others were settled on dryland properties, though often through acquisition of existing farms rather than division of larger estates. Among some 4600 settlers there were costly failures resulting from inadequate farm size, poor training opportunities, deficient administration and in the case of the irrigated blocks, drainage and salinity problems due to excessive water application. Hardship for farmers, including the soldier settlers, was compounded by the low commodity prices of the Great Depression.

Rabbits, released about 1870 at Kapunda in the Mid North for game shooting, soon became a major pest. They had spread over agricultural areas by 1880 and the entire state by 1900. Dingo attacks on sheep in the pastoral country and locust and mouse plagues were other problems. The release of myxomatosis in 1950 effected biological control of rabbits in agricultural districts, while calicivirus released from 1995 was effective in reducing rabbits in the arid areas. Vermin fences to protect sheep from dingos were begun in the late 1880s, being brought together into a single Dog Fence 2200km long in 1946, linked to those in New South Wales and Queensland. Periodic locust plagues have been controlled by coordinated state government insecticide spraying, built upon the activities of the Australian Plague Locust Commission. The introduction of bulk handling in the 1950s reduced the impact of mouse plagues on harvested grain.

JD Custance was appointed professor of agriculture in 1882, and by 1883 had established Roseworthy Agricultural College to the north of Adelaide. He identified the importance of phosphate fertilisers on wheat, whose yields had progressively fallen since settlement. Widespread adoption followed successful demonstrations about 1890 by the Correll Brothers at Minlaton of sowing seed with phosphate fertilisers.

Albert Molineux, printer of The Garden and Field, led the establishment of the Agricultural Bureau movement from 1888. Branches, many still extant, were initiated around the state, allowing small groups of farmers to help each other in their use of the land and husbandry of its natural resources. A Department of Agriculture was begun with the appointment of AJ Perkins as Secretary of Agriculture in 1902. Experimental farms were soon established, at Turretfield on the western edge of the northern Mount Lofty Ranges, Kybybolite in the South East, Parafield on the Adelaide plains, Murray Bridge on the lower River Murray and Veitch in the northern Murray mallee.

Irrigation from the River Murray was commenced in 1881 by Governor William Jervois, who had reclaimed a swampy area near Murray Bridge. The government reclaimed further swamps for dairying at Mobilong, Monteith and Mypolonga during 1905–1910. Meanwhile, the Chaffey brothers had been licensed in 1887 to occupy 12 000 hectares for irrigated horticulture near what became Renmark but fell into financial difficulties. Consequently, the Renmark Irrigation Trust was established in 1893. In a further development in the early 1890s to alleviate distress, the government allocated land and funds for irrigated village settlements at Ramco, Waikerie, Holder, Kingston-on-Murray, Moorook, Pyap, New Era and Lyrup, with settlers responsible for interest and ultimate repayment of capital. Most quickly failed.

The development of the stump-jump plough together with the Murray Bridge–Pinnaroo and Port Lincoln–Cummins railways in 1906–1907 allowed the opening up of mallee country. These rail lines were later extended to additional areas. Some, mostly outside Goyder’s Line, proved marginal.

In 1913 Peter Waite arranged to hand over 53 hectares of land at Urrbrae in the eastern suburbs to the University of Adelaide for agricultural studies and an arboretum. This became the Waite Agricultural Research Institute, established in 1924 under Professor AEV Richardson. A further 45 hectares offered to the state government became Urrbrae Agricultural High School. By 1927 the Council for Scientific and Industrial Research (later CSIRO) had established its Division of Soils at the institute. The Waite Professor of Agricultural Chemistry, JA Prescott, became the division’s chief and later the institute’s second director. Degrees in agricultural science were first awarded in 1932. The Australian Wine Research Institute opened on the site in 1955, and the state government consolidated its Adelaide-based agricultural research and development and natural resources activities on the Waite Campus in the early 1990s.

The 1930s depression were years of significant land degradation. The extensive use of long fallows for moisture conservation had resulted in loss of soil structure, with water-borne soil and wind erosion becoming serious problems, the latter particularly in the sandy mallee soils. These problems led to a Sand Drift Act in 1927. A Soil Conservation Act followed in 1939, with boards subsequently formed.

From 1946 a War Service Land Settlement program was established, with the government developing as well as allocating land. Recognition that trace elements together with subterranean clover would allow 250 000 hectares of previously infertile mallee scrub, heath and lateritic soil country to be brought into production in the South East, Kangaroo Island and southern Eyre Peninsula formed the basis of the farms developed under the scheme. A further 160 000 hectares in the Ninety-Mile Desert was privately developed by the AMP Society to become Coonalpyn Downs. This was the last major area to undergo agricultural development in South Australia. Within 30 years some of these areas were experiencing dryland salinity and in 1983 the state government placed restrictions on further scrub clearance.

Meanwhile grain-growing areas saw changes in production systems. Tractors became universal from 1950. Barley had become a major crop. Cereal growers adopted ‘ley farming’ systems in which cropping was rotated with grazed clover and medic pastures which, through nitrogen fixation, restored soil fertility and soil structure. New grain varieties with higher yields, better marketing characteristics and greater disease resistance, together with use of more selective herbicides, minimum tillage, higher levels of fertiliser application and carefully planned crop rotation to minimise the impact of soil-borne diseases allowed the cereal industries to increase their yield by 2.2% per annum over the period 1978–1998.

Numbers of farmers progressively declined as secondary industry expanded; in 2000 only 3-4% of the population was directly engaged in agriculture. Nevertheless, total production of agricultural commodities was generally higher than ever. Industries have continued to expand, grapes, wine and aquaculture being the most recent. Opportunities have been developed to meet new niche markets for organic produce and cut flowers, while some pasture land has been turned over to the production of fast-growing timber crops.

At the same time farmers have become much more conscious of the importance of conservation of the natural resources upon which their enterprises depend, beginning with land-use changes initiated through the landcare movement in 1990, and more recently broadened into ensuring all aspects of production systems are managed as sustainably as possible. English agricultural production systems have been progressively adapted with increasing success to harmonise with the highly variable Mediterranean-type climate pattern imposed over an old and relatively infertile continent. 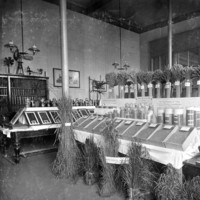 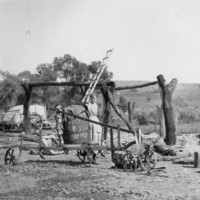 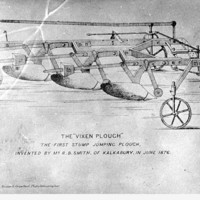 Burgess, Henry Thomas, The cyclopedia of South Australia in two volumes : an historical and commercial review, descriptive and biographical, facts, figures, and illustrations: an epitome of progress, (Adelaide: Cyclopedia Company, 1907-1909.)