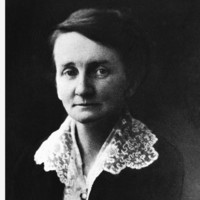 Susan Grace Benny (1872–1944), known as Grace, was the first woman local government councillor in Australia. Her achievements are honoured by an Adelaide City Council plaque on North Terrace near the corner of King William Street.

Grace was born in the Crown Inn Hotel, Currie Street, Adelaide on 8 October 1872. She was the eldest daughter of Agnes Ellen (nee Harriot) and Peter Anderson. Grace, whose mother died when she was nine, grew up on the family’s sheep station, ‘Springfield’, on Yorke Peninsula. She was sent to a small boarding school in McLaren Vale before returning home to teach her sisters.

On 16 July 1896 Grace married her cousin, solicitor Benjamin Benny, at ‘Springfield’. She then moved to Adelaide, where Benjamin worked. They raised five children in their home ‘Stoneywood’ in Seacliff, a southern suburb of Adelaide. Grace maintained an interest in poetry and literature. She and her husband developed a valuable library of over 2000 volumes.

Grace was active in a range of community and political organisations. During the First World War she acted as Honorary Secretary of the Seacliff Cheer-up Society, which offered support to servicemen. She was also a member of the local progress association and spinning and croquet clubs. In 1918–19 Benny was a member of the Liberal Union Sturt District committee and president of the Brighton Women’s Branch of the Liberal Union. In 1918 she was elected president of the Women’s Branch of the South Australian Liberal Union. She argued strongly for equality of divorce for women, which became part of the party platform. In 1918 this became law in South Australia.

On 22 December 1919, on the petition of ratepayers, Benny was appointed by the state government to represent the newly created Seacliff Ward on the Brighton Council. As a council member Grace successfully argued for several improvements at Brighton, including access to the beach, the installation of electric lights and the allocation of reserves for a children’s playground and public garden. She actively supported the abolition of segregated sea-bathing, so that families could swim together. She won two further elections, but left local government after an unsuccessful attempt to be elected Mayor of Brighton in 1922.

In 1921 Grace Benny was made a Justice of the Peace, hearing cases relating to state children, police matters and women.

However, her life was turned upside-down in 1926 when a scandal engulfed her husband. Benjamin Benny had become a Senator for the Australian Nationalist Party. Benjamin resigned from federal parliament on 27 January 1926 due to ill health. He was convicted in June 1926 of embezzlement and sentenced to three years hard labour. He was also declared insolvent.

Grace and her children lived off an inheritance and then income from a small business that she established. She moved her home to the city and ran the Elite Employment Agency throughout the Great Depression from her husband’s office in King William Street. Income was sufficient to give all the children a private school education.

Grace separated from Benjamin, who died in 1935. She married Cecil Ralph Bannister in Melbourne on 23 February 1940. He was a tramway worker and clerk, 20 years her junior. They lived in Adelaide, where Grace continued her work as a Justice of the Peace. Grace died in North Adelaide on 5 November 1944 and was buried in the Scots cemetery at Morphett Vale.

But for her husband’s disgrace, Benny might have achieved more in politics. Her contribution to local government has been recognised. The Brighton Council named a crescent and centre for women’s groups after her. The Grace Benny Scholarship, awarded annually by the Australian Local Government Women’s Association (South Australian Branch), celebrates her ‘pioneering spirit’ by awarding two women elected members (one from a metropolitan council and one from a rural council) a scholarship of $500 each to be put towards an activity that will enhance their skills as an elected member. 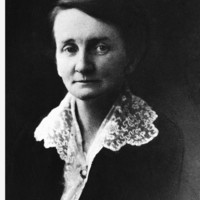 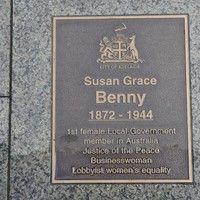