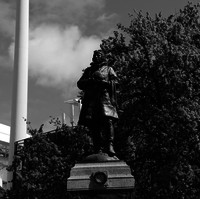 The year was 1919. The war was finally over. Prime Minister Billy Hughes offered £10,000 for the first Australian airmen to fly home from England in 30 days. Six crews took up the challenge in planes that were as rudimentary as they were unreliable. And who won? South Australian brothers Ross and Keith Smith, backed by mechanics Wally Shiers (SA) and Jim Bennett (Vic).

The flight was likened in its day to Christopher Columbus discovering the New World. Today’s historians say it was significant as man landing on the moon 50 years later. Rediscover this epic journey through sites of significance in South Australia.

The Sir Ross Smith Memorial in Creswell Gardens commemorates the achievements of aviator Sir Ross Smith and the first flight from England to Australia.

The brothers and pioneer aviators Sir Keith and Sir Ross Smith were pupils at Queen's College shortly after the turn of the century. S

The Smith brothers’ grave is situated in a prominent position adjoining the Bishop Short Memorial Garden alongside the century-old Chapel of the Resurrection at North Road Cemetery.

The Museum features an interpretive display commemorating the flight of Vickers Vimy G-EAOU in 1919 by Ross and Keith Smith and their mechanics Wally Shiers and Jim Bennett.