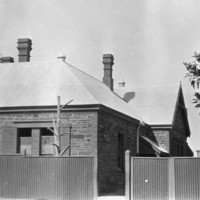 Designed in 1892, Queen’s School became one of South Australia’s leading private schools. The building illustrates the development of both an important private school and changes in private school education generally.

When the school closed at the end of 1949, it was the last privately owned boys' school in the state.

The school began in ad hoc fashion in 1897. Christ Church School building in Jeffcott Street was let for school use to Miss Miller in 1879 and then to a series of ministers between 1880 and 1891, the last, Reverent T. Field (1883-91), selling the goodwill to Messrs Lindon and Heineman who were to open Queen’s School. Queen’s School maintained a continuous link with Christ Church with the rectors acting as chaplains of the college.

Under the management of J.H. Lindon as headmaster and J.E Heineman, the school moved to its new premises in Barton Terrace in 1893 where it was established as Queen’s School, “… in honour of the reigning sovereign, Victoria the Good’.

The thirty-four boys in the old school more than doubled in number at the new site. How-ever, the school’s major period of expansion occurred between 1920 and 1928 when Edward Stokes became headmaster. Under Edward Stokes the school flourished, based on his belief that

and on the development of character. A broad expansion policy was started. He established the Ross Memorial Library and preparatory school. He introduced a house system, new societies, a scout troop and an annual school magazine. Tennis courts and pitches were laid down. The school grew to 121 pupils by 1930. Stokes decided to change the name to Queen’s College, the change implying its unquestioned status as a matriculating institution.

By 1928 former pupils had gained six Rhodes scholarships and several other old scholars had gained acclaim in their field of knowledge. These old scholars included Professor Walter Duffield, the first director of the Commonwealth Observatory in Canberra, Dr Grenfell Price, and the physicist Sir William Lawrence Bragg who was the youngest-ever Nobel laureate.

In common with most other private schools during the Depression, Queen’s College suffered heavily in the 1930s. Although it survived until 1949, the school simply could not overcome the major financial obstacle of minimum enrolments, and the school was eventually closed and sold. Memorabilia such as school honour rolls, cricket shields and scholarship boards were hung in the Christ Church Day School in Jeffcott Street which closed about fifteen years later.

This purpose-built school building which included classrooms and laboratories was designed in 1892 by F.J. Naish, architect of Elder Hall at the University of Adelaide (see PL27) and Ambassadors Hotel in King William Street (see CBD26). Naish’s tender notice ‘… for the erection of Queen’s School, Barton Terrace’ appeared in the South Australia Register, 20 August 1892. The design is similar to the late nineteenth century villa which gives the building a domestic appearance, although with few ornamental flourishes. Several original windows with brick surrounds on the eastern elevation reflect the school use of the building.

The house is an important contributory element on Barton Terrace because of its domestic scale and style. It reinforces the essential residential character of the streetscape. 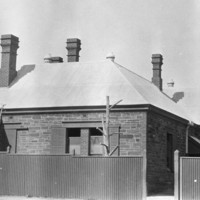 This building was constructed as the Queen's School in 1892.

Image courtesy of the State Library of South Australia, SLSA: B 4795, Public Domain 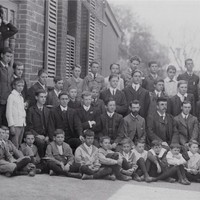 Staff and students (including Keith Smith) outside of Queen's College 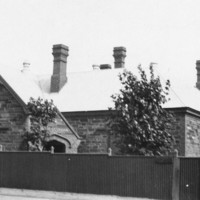 Exterior of Queen's College after a new verandah had been installed

Image courtesy of the State Library of South Australia, SLSA: B 5031, Public Domain