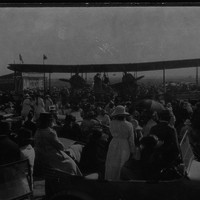 Tens of thousands more – including school children who were given the day off – climbed onto rooftops and into trees, or trekked into the Adelaide Hills for a view of the record-breaking Vimy.

The plane was spotted low and to the left of Mount Lofty at 1.38pm on 23 March 1920, with The Advertiser reporting that “instantly there was a cry from thousands of throats of ‘there she comes’”. The Vimy charted a course down Cross Road, where family friends had hung welcome signs from balconies, before heading north over the city centre. The crew waved handkerchiefs in response to the “cheer upon cheer” which “rent the air”. They touched down on home soil at 1.55pm.

The Vimy had flown from England to Australia - a distance of 17,800km - in just 28 days to win the 1919 Air Race, arriving in Darwin to a heroes' welcome on 10 December 1919. But with the aircraft's twin Rolls-Royce engines showing major signs of wear and tear, the 4800km victory flight south to Sydney, Melbourne and finally Adelaide took twice as long.

After nearly six years away, Ross Smith was determined to make it home - by air - to Adelaide. Speaking at a welcome reception hosted by his old comrades from the 3rd Light Horse Regiment at the Tivoli (now Her Majesty’s Theatre), he said the night was “quite the happiest he had ever spent in his life, because he was back in his native city”.

Today, the landing site remains clearly marked by an historic pine tree planted in the Smith crew's honour. The surrounding area has been beautifully landscaped as part of the Lightsview suburban development and can be seen from adjacent Hampstead Rd. 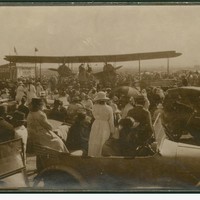 Image courtesy of the State Library of South Australia, SLSA: B18543, Public Domain