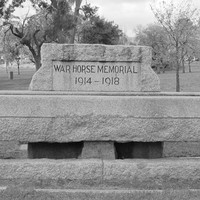 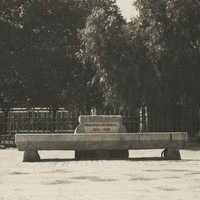 When Victoria Square was redesigned in 1964 it was decided to shift the memorial to another site. 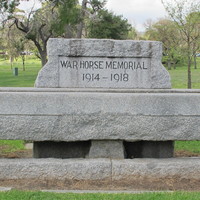 The memorial was shifted to the East Parklands, on the corner of East Terrace and Botanic Road. It was installed by SD Tillet Ltd and reopened on 18 April 1967 in time for the Anzac Day commemoration.

The War Horse Memorial in Kadlitpinna/Rundle Park/Park 13, on the corner of East Terrace and Botanic Road, commemorates the thousands of horses that served in the First World War (1914–1919). This was the last war in which horses were used extensively. Modern artillery made them too vulnerable and their offensive role was replaced by tanks.

More than 39 000 horses were shipped from Australia to the Australian Imperial Force (AIF) overseas. Only one, ‘Sandy’, returned. This was the horse of Major-General Sir William Bridges who commanded the AIF at Gallipoli and was wounded fatally there in May 1915. The rest of those that had not been killed in battle were either transferred to other armies or destroyed, much to the grief of their handlers. Costs and quarantine concerns were given as reasons for them not being brought home. Strong feelings about the fate of the horses may have contributed to the creation of the memorial.

Remembering the role of horses in war

The initial suggestion for a war horse memorial came from the Register newspaper. By mid 1919 returned soldiers, racing clubs and members of the public had contributed £200 towards its construction. But this amount was insufficient, so an organising committee was appointed under the auspices of Lord Mayor Charles Glover to raise funds. Glover was inspired to lend his support to the project both by the role of horses in wars and by a memorial erected South Africa in honour of horses that were killed in the Boer War. The memorial took the form of a drinking trough with bronze plaques and a kneeling bronze trooper, it was most likely the memorial at Port Elizabeth, which matches that description.

However, momentum for the memorial was lost when the secretary of the committee, Captain Norman Malcolm of the 9th Australian Light Horse Regiment, moved to Western Australia. It was not until January 1921 that the proposal was revived by Miss ES Abbott, a reporter for the Register, and Alec Morrison. Public meetings reignited interest and further funds were secured from racing clubs. Eventually £248 14s 9d was raised – enough for a simple memorial consisting of a stone water trough that could be used by working horses, and accompanying bronze plaques. A small surplus was donated to the Society for the Prevention of Cruelty to Animals.

The War Horse Memorial was erected in Victoria Square at the intersection of King William Street and Grote Street, and unveiled on 30 January 1923. It was connected to the water supply by the Adelaide City Council so that it could be freely used by horses carting produce for the nearby Adelaide Central Market. At the time it was the only memorial of its kind in Australia.

At the opening, Sir Frank Moulden, chair of the organising committee, stated that ‘the memorial had been erected out of respect and admiration of the horses that had left Australia to take part in the Great War’. Police Commissioner Brigadier-General Ray Leane turned on the water. In his address, Leane also paid tribute to the camel and the mule, which together with the horse ‘had … done their work splendidly, and had been loved by their drivers’.

When Victoria Square was redesigned in 1964 it was decided to shift the memorial to another site. The Police Barracks at Fort Largs and the South Parklands were suggested locations, but members of the Light Horse Association successfully argued that it should be placed beside their memorial obelisk in the East Parklands, on the corner of East Terrace and Botanic Road. The memorial was installed by SD Tillet Ltd and reopened on 18 April 1967 in time for the Anzac Day commemoration.

The War Horse Memorial was designed by architect Alfred Wells and sculpted by WH Martin Ltd of Unley. It is made of Harcourt Victorian granite and weighs about a tonne. The trough is 4.9m long and raised on a short stone base. The proportions and rough finish of the trough symbolise the strength and toughness of the bush horses, or walers, of the Australian Light Horse, which were highly prized. Light horse regiments comprised mounted infantry as distinct from cavalry. Many South Australian men from country areas served in these regiments. As working horses are no longer used in the city, the trough does not contain water.

The inscription on the back plaque reads:

This trough was erected by public subscription to commemorate the noble service of Australian horses towards the Empire’s victories in the Great War 1914-1918.

‘He paweth in the valley, and rejoiceth in his strength: He goeth on to meet the armed men. He mocketh at fear, and is not affrighted; neither turneth he back from the sword,’ Job 39, 21 and 22.

In 1995 a white granite memorial was erected by the 2/9th Australian Armoured Regiment Group Association (the Royal Australian Armoured Corps being a successor to the light horse brigades) near the two memorials. This, the planting of a Cyprus plane tree and the associated bronze plaques were in recognition of the jubilee of VP Day, 15 August 1945. In 2002 Premier Mike Rann unveiled a bronze plaque on the Light Horse Memorial on the 85th anniversary of the charge of the 4th Light Horse Brigade at the Battle of Beersheba in Palestine on 31 October 1917 ‘to commemorate the passing of Private Albert Whitmore 1899–2002 the last surviving Australian Light Horseman and the last surviving South Australian World War I veteran’. 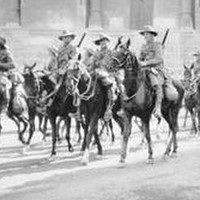 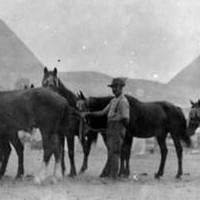 Horses from an Australian Light Horse Unit waiting in line for attention by a blacksmith. Egypt,1915. 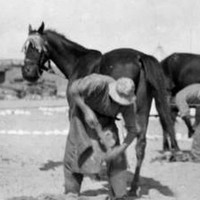 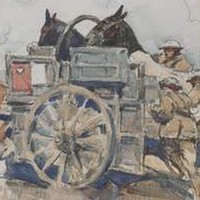 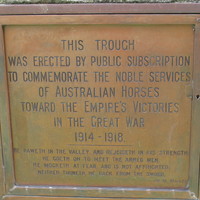 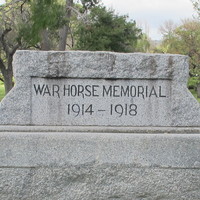 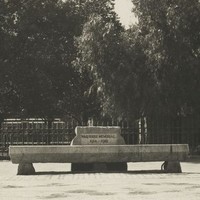 Image courtesy of the State Library of South Australia, SLSA: B 35794, Public Domain 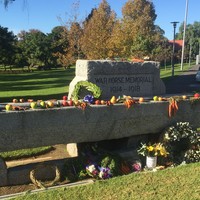 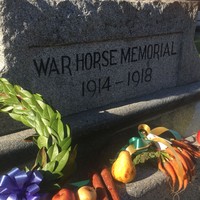