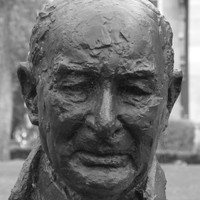 Sir Thomas John Mellis Napier (1882-1976) was born in Dunbar, Scotland and migrated to South Australia in 1898. He studied law at the University of Adelaide and completed his articles under Charles Cameron Kingston. Napier became the youngest practitioner in the Supreme Court at just 21 years of age. In 1921 he was made a King’s Council. Just three years later he was appointed a Supreme Court judge. He served as Chief Justice of South Australia from 1942 to 1967.

Mellis Napier, as he was generally known, chaired two significant and contentious Royal Commissions: the 1935 enquiry into Australia’s monetary and banking systems, and the 1959 consideration of a retrial of Aboriginal man Rupert Max Stuart.

Napier was active in a wide range of community organisations. He was president of the English Speaking Union, a grand master of the Grand Lodge of Ancient, Free and Accepted Masons of South Australia, patron of the National Trust of South Australia, president of the St John Ambulance Association and Chancellor of the University of Adelaide (1948-61).

Mellis Napier received a state funeral on his death in 1976.

The bronze bust of Mellis Napier sits not far from the entrance to Government House, North Terrace in recognition of his long service as Lieutenant-Governor from 1947 to 1973.

Prominent South Australian sculptor John Dowie had displayed a plaster cast of the bust at the Advertiser Art Exhibition in 1970. Sir Lloyd Dumas, chairman and managing director of the Advertiser, approved of the work and, together with other admirers of Napier, paid for its production. They presented the completed bust to the City of Adelaide for public display.

The bronze was cast by FJ Lemon of Moorabbin, Victoria. The Adelaide City Council provided the plaque and stone pedestal, which was designed by WA Gilbert of Medindie in Adelaide in association with Dowie.

The bust was unveiled by Governor-General Sir Paul Hasluck on 2 July 1970 before a gathering of 150 people. The 88-year-old Napier was present. Reflecting his discomfort with the contemporary period of social unrest, he expressed a desire for ‘a better time to come’. 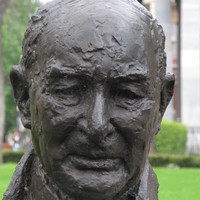 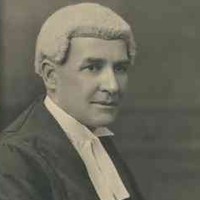 Image courtesy of the State Library of South Australia SLSA: B 11109, Public Domain