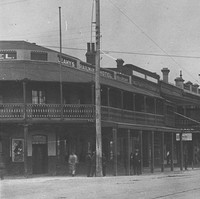 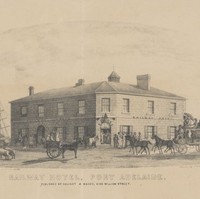 William Wooldridge opens the second Railway Hotel on the corner of St. Vincent and Lipson Streets 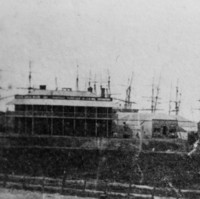 The Port Adelaide Railway Station opens across the street from the Railway Hotel, and provides a steady stream of customers for several years
2014

After 158 years of continuous operation, the Railway Hotel closes its doors after a buyer for the establishment cannot be found
2014

Six months after its closure, the Railway Hotel is bought by publican Tony Bond and re-opens

The two-storey historic building located at 247 St. Vincent Street was the second in Port Adelaide to bear the name ‘Railway Hotel’. Opened in 1856, it was located directly across the street from the Port’s original railway station, and was frequented for several years by an assortment of rail travellers, visiting sailors, dockside workers, and local inhabitants. After a century-and-a-half of continuous operation, the Railway Hotel closed its doors in early 2014, but re-opened later the same year under new ownership.

Port Adelaide’s first ‘Railway Hotel’ was located on the north-east corner of the intersection of Commercial Road and St. Vincent Street (today’s 55 Commercial Road). It was a large two-storey stone building described at the time it was licensed as ‘a very superior house…capable of giving extensive accommodation’. The hotel’s first licensee, Robert Sanders, opened the business in November 1849 in anticipation that it would be located adjacent to the terminus of a horse-drawn railway originating in Adelaide. Funding issues and the loss of most of the Port’s male population to the Victorian goldfields the following year effectively scuttled construction of the railway, and the business Sanders hoped for quickly disappeared. Sanders himself soon followed suit, as a fiat of insolvency was issued against him in December 1850 for having ‘clandestinely left the colony for India very deeply in debt, and carrying with him…a considerable sum of money’.

In the wake of Sanders’ sudden departure, control of the hostelry transferred to Charles Calton. Calton, who intermittently operated Adelaide’s Royal Admiral Hotel on Hindley Street between 1839 and 1847, renamed the business the Port Admiral Family Hotel and was granted a publican’s license in March 1851. The name was subsequently shortened to the Port Admiral Hotel, and the business operated from the same premises for well over a century. Although currently vacant, the former Port Admiral Hotel still stands at the corner of Commercial Road and St. Vincent Street, and is the Port’s oldest surviving building.

Port Adelaide’s second Railway Hotel opened on the corner of Lipson Street and St. Vincent Street in March 1856. The license was granted to William Wooldridge, who in a stroke of genius established his business immediately opposite the newly constructed Port Adelaide Railway Station. When the station opened to the public the following month, disembarking passengers had only to step outside and cross the street to find food, drink and accommodation. Similarly, those waiting to catch their train could drop in to the hotel for a quick drink or meal before departing.

While at least one contemporary account describes the hotel as a ‘substantial brick-built’ structure, the ground floor appears to have been the result of a ‘random stone work’ construction phase, while the level above was built entirely of brick. Originally, stables were located outside at the back of the building, but over time were gradually subsumed into the basement as land reclamation between 1850 and 1880 raised the surrounding ground level by as much as two metres. Despite being re-purposed, the stables retain most of their original construction attributes, and are remarkably well preserved. Between 1856 and 1860, the hotel featured a variety of furnishings, including horsehair sofas, cedar chairs, cedar tables, horsehair chairs and pictures. Bedsteads and bedding were available for overnight and long-term tenants. A variety of alcoholic beverages, including wines, spirits, ale and porter, were sold at the hotel and dispensed from either glass bottles or wooden casks.

Within two years of opening the Railway Hotel, William Wooldridge fell ill and died, and by 1858 the publican’s license had passed to his wife Mary. She ran the business for another two years before the license was transferred to Edward Lockyer. In September 1860 Lockyer was found guilty of violating the Publicans Act for ‘illegally keeping open the side door of his premises on Sunday’, and this likely contributed to his license being revoked and passed to Edward Bailey the same year. In an ironic twist, Bailey himself was brought before the police court in April 1863 for a nearly identical infraction of the Licensed Victuallers’ Act, but the charge was dismissed.

The publican’s license for the Railway Hotel passed among several holders for the remainder of the nineteenth century and into the early twentieth century, but the establishment itself remained a popular haunt for locals and visitors alike. Its popularity likely saved it from closure during the Local Option Poll of 1909, which culminated in cancellation of 15 hotel licenses in Port Adelaide. The option poll occurred as a result of the temperance movement in South Australia, which decried the abuse of alcohol as the colony’s greatest social scourge, and attempted—unsuccessfully—to completely prohibit the liquor trade during the 1880s and 1890s.

By the second decade of the twentieth century, the Port’s most vocal temperance advocate was Reverend Joseph Kirby, a Congregationalist minister who effectively argued for legislation restricting alcohol sales. The resulting principle of ‘local option’ permitted electors to exercise control over the number of liquor licences in their district, impose restrictions to Sunday trading hours, and increase the legal drinking age. Kirby’s most famous achievement, ‘Six o’ clock Closing’, was introduced as a wartime measure in 1916 and remained on the books until overturned by Donald Dunstan’s government in September 1967. Through it all, the Railway Hotel remained in business and soldiered on as the twentieth century came to an end.

Construction of the Outer Harbour Container Terminal during the 1970s led to a sharp decline in the number of waterside workers operating within Port Adelaide, which in turn had a follow-on effect on the community’s public houses. Likely as a result of its proximity to the Port Adelaide Railway Station (renamed Port Dock Station in 1916) the Railway Hotel seems to have retained more clientele than other Port hostelries, but it too suffered reduced numbers. In 1989, the building was purchased by Fred Hiscock and Sue O’ Reilly. The duo retained the hotel’s name and operated the business until 2010, when it was put up for sale. Unable to find a buyer after four years, Hiscock and O’Reilly called last drinks on 1 March 2014 and announced their intention to transform the hotel into their home. However, Adelaide publican and businessman Tony Bond purchased the Railway Hotel six months later and announced that it would re-open as part of his initiative to invest in Port Adelaide and its community. 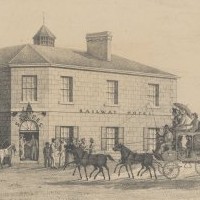 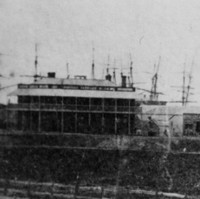 Port Adelaide Railway Station, with the Railway Hotel visible in the left background of the image, c. 1870 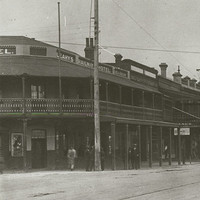 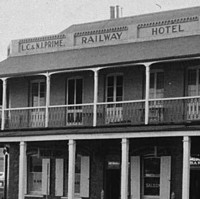 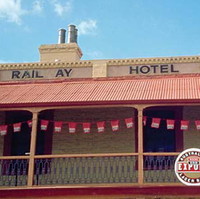 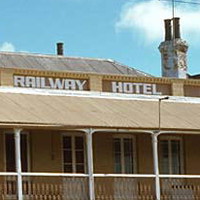 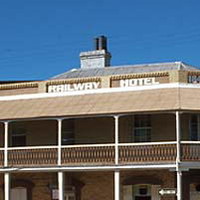 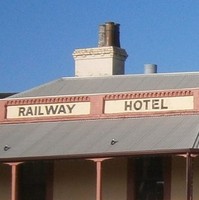 We are sorry to hear that Sue, thank you for sharing.

Sadly the former publican of the Railway Hotel Port Adelaide past away 4am on the morning of the 7th September 2020.

Port Adelaide lost an icon but we will not forget the good times and the laughs he gave us.

Glad you found it useful CJ

thanks for the info im doing a research project

That's great information Michelle, it doesn't look like we have much on that period at present.

Hi I am sure my grandparents had the Railway hotel in the 70's Len and Nita Prime?

Thanks for that extra information Al!