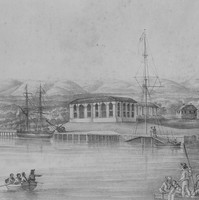 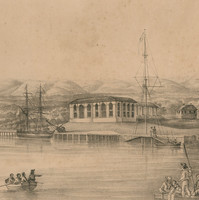 Maritime labourers in Port Adelaide go on strike to show solidarity with Sydney- and Melbourne-based transport workers. Protests and picketing occur at all wharves in the Port
1917 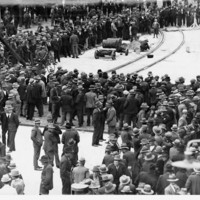 In an effort to combat its deteriorating condition, McLaren Wharf undergoes comprehensive renovation and redesign

Built between 1839 and 1840, McLaren Wharf was the first element of maritime infrastructure established at Port Adelaide following the port's removal from its initial site at ‘Port Misery’ to the location it presently occupies. Originally constructed and utilised by private mercantile interests, the wharf was ultimately acquired by the South Australian government via compulsory purchase. It has undergone significant renovation on at least two occasions, and was a site of waterside workers strikes in the 1880s, 1890s and 1920s. Today, McLaren Wharf continues to function as a berth for large vessels, including visiting tall ships and the South Australian Maritime Museum’s fleet of heritage watercraft.

The initial landing site at Port Adelaide was located on a low bank of sand-hills at the southern end of what is today known as ‘Old Port Reach’ on the Port River. Officially dubbed the Port Creek settlement, the landing was surrounded by mangroves, muddy creeks and tidal inlets, and risked inundation during higher-than-average tidal conditions. It was also plagued by mosquitoes and lacked a reliable freshwater supply. In terms of accessibility, the settlement left much to be desired. Seagoing vessels could only get as far as the southern end of Gawler Reach (near present-day Birkenhead Bridge) before having to discharge passengers and cargo into ship’s boats. Upon arriving at the end of Old Port Reach, an additional half-kilometre of mangroves and sand-hills had to be traversed before the road to Adelaide was reached. Not surprisingly, the Port Creek settlement soon earned the sobriquet ‘Port Misery’, and plans were set in motion in 1838 to move the port facilities to a more suitable location.

Governor George Gawler originally intended to move the New Port to a location at the northern end of Hindmarsh Reach, on the Adelaide side of the Port River near its confluence with the North Arm. However, as there were no public funds to pay for the reclamation work and transport infrastructure necessary to make the Hindmarsh Reach site viable, Gawler had to rely on private enterprise to cover costs. Upon learning of Gawler’s predicament, the South Australian Company’s manager, David McLaren, offered to construct a wharf along the stretch of Gawler Reach where large ships anchored to load and offload passengers and cargo. Recognising that McLaren’s proposal was likely the only means by which a viable port could be established, Gawler used his influence as governor to accept the company’s tender. The resulting legal agreement granted the South Australian Company the best property within the proposed port and township, but also required it to construct a causeway between the waterfront and nearest point of dry land above the high water mark.

Work commenced on McLaren Wharf in June 1839. It was positioned to one side of the mouth of a small creek that emptied into the Port River—a location today occupied by the terminus of Commercial Road at McLaren Parade and North Parade. The wharf’s overall length was 336 feet (102 metres), and water depth alongside was 15 feet (4.6 metres) at low tide. A substantial warehouse owned and operated by the South Australian Company was located nearby. George Strickland Kingston, the engineer responsible for the wharf’s construction, requested that it be built from the low water mark in an effort to simplify its assembly. Because this plan deviated from standard British practice Surveyor-General Charles Sturt refused the request, but his decision was overturned by Gawler, who wished to expedite the wharf’s completion.

McLaren Wharf was officially opened by Governor Gawler on 14 October 1840, and named in David McLaren’s honour during the accompanying ceremony. Other festivities included a procession along Port Road that featured more than 1000 pedestrians, 600 horsemen, and 450 vehicles. Fourteen flag-draped vessels were moored in Gawler Reach, while another—the barque Guiana—was brought alongside the wharf where it ceremonially discharged a box of tea and bale of spices. The event concluded with a formal dinner in the South Australian Company’s warehouse.

An increase in shipping at Port Adelaide during the mid-nineteenth century created a need for additional wharfage. In 1856, the South Australian Company dredged a small creek to the east of McLaren Wharf as a means of meeting the increased demand. The new berthing zone, known as the Company Basin, opened the following year. Following construction of the Port Adelaide Dock in 1880, the Company Basin was extended further east, necessitating the construction of two bridges—Robinson’s Bridge and the Fisher Swing Bridge—to facilitate access to other wharves located to the north along the Port River’s eastern shore.

In 1876, McLaren Wharf was the subject of an argument between the South Australian Company and the Port Adelaide Council and South Australia’s Marine Board. At issue was the construction of access steps for a ferry service intended to transfer passengers from the end of Commercial Road across the Port River to Lefevre Peninsula. The Marine Board and Port Adelaide Council supported the initiative, but the South Australian Company objected on the grounds that the proposed steps would interfere with the operation of McLaren Wharf and encroach on the company’s rights of use. Ultimately, all parties agreed to a compromise in which the ferry landing was shifted slightly so that the steps emerged from the centre of Commercial Road’s terminus with the Port River.

McLaren Wharf was the focus of another dispute in 1913. In this instance, the South Australian Company requested an injunction against the Port Adelaide Corporation’s plans to erect a pontoon landing stage and ramp near the wharf. At the end of a 30-day court case the judge ruled in the South Australian Company’s favour, citing among other determining factors the wharf’s historic occupation and use.

The South Australian Company ceded ownership and operation of McLaren Wharf to the South Australian government in January 1917. This was done in accordance with the Harbours Act (1913), and followed the creation of the South Australian Harbours Board. Under the Act, the state government was given power over state-owned wharves, as well as authorisation to acquire those that were privately-owned. In the latter case, the Harbours Board could enforce compulsory purchase in its acquisition efforts. As commercial wharves and maritime infrastructure were transferred to government ownership, the Harbours Board realised that many of its new acquisitions were in a poor state of repair and that a comprehensive wharf rebuilding program was necessary. McLaren Wharf fell well within this category, and would ultimately undergo comprehensive renovation and redesign in 1935. Among the more notable alterations was a reduction of the wharf's footprint—which always jutted further into the Port River than adjacent wharves—that brought it into alignment with those around it.

McLaren Wharf was the scene of significant strikes by Port Adelaide maritime workers. The first occurred in October 1880, the second in August 1890, and a third in September 1928. In the first instance members of the Shipmasters’ and Officers’ Association (which included stevedores, porters and seamen) were locked out by the Adelaide Steamship Company because they wanted to associate with labour unions and the Maritime Labour Council. The strike that resulted soon affected practically all merchant watercraft berthed in the port, and nearly led to clashes between the strikers and non-union replacements hired by the Adelaide Steamship Company. The situation resolved when the Shipmasters’ and Officers’ Association was allowed to affiliate with the Maritime Labour Council.

In the wake of the 1880 strike, employer-worker tensions persisted and were rekindled a decade later during the Great Maritime Strike of 1890. This time, maritime labourers in Port Adelaide went on strike to show solidarity with Sydney- and Melbourne-based transport workers engaged in disputes over pay and employer use of non-union labour. At the height of the protest, South Australian Defence Minister Thomas Playford ordered artillery units at Fort Largs to disperse picketers at Port Adelaide’s wharves and Port River Bridge with ‘all necessary force’. The strikers soon learned of Playford’s directive and withdrew before the military arrived, but were afterwards embittered by the government’s willingness to suppress their protest with armed soldiers.

The Waterside Workers’ Strike of 1928 resulted from judicial and political decisions by the federal government that overturned improved pay and working conditions for maritime labourers. In Port Adelaide, violent clashes between strikers and non-union workers were occasionally a side-effect of emotionally-charged rallies and marches. On 28 September 1928, approximately 4000 union strikers rushed several steamships tied up alongside the wharves at the foot of Commercial Road and compelled non-union ‘volunteer’ crewmen to abandon their posts. While many complied and were allowed to leave unmolested, others did not and were either chased away or assaulted. In at least one instance, a non-union worker was seriously injured with a baling hook. A second protest on 14 January 1929 specifically targeted McLaren Wharf, and pitted stone-throwing strikers against non-union workers and police. Ultimately, the creation of a volunteer ‘Citizen’s Defence Brigade’ comprised primarily of clerks, professional men, and university students augmented the police force and enabled it to protect non-union labourers while simultaneously re-establishing some semblance of order at the port.

Since the mid-twentieth century, most large-scale shipping has gradually shifted from Port Adelaide’s Inner Harbour to facilities along Hindmarsh Reach or in the Outer Harbour. As a consequence, McLaren Wharf is now primarily used to accommodate pleasure and tourist craft, visiting naval vessels, and historic/replica tall ships. Today, a handful of private residences and businesses occupy wharf frontage that once formed the thriving nucleus of South Australia’s maritime industry and commerce. 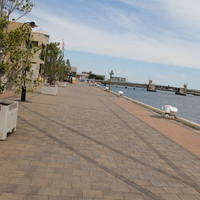 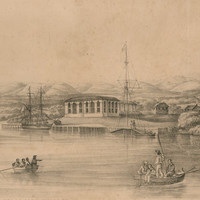 Pencil sketch by J Hitchen entitled ‘The New Port in 1840’, showing McLaren Wharf as it appeared shortly after it was built 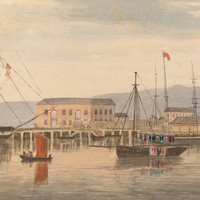 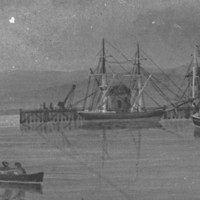 Painting of Port Adelaide by G.F. Gregory, 1844. McLaren Wharf is visible in the centre background 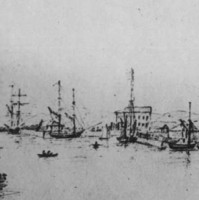 Sketch of Port Adelaide by Alexander Murray, 1844. McLaren Wharf is visible in the centre-left background of the image 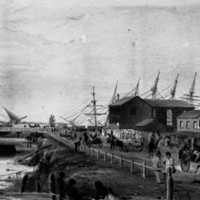 Sketch of Port Adelaide by T. Hosmer Shepherd, 1845. McLaren Wharf and the SA Company building are to the right of the creek 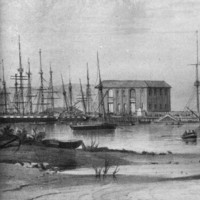 Painting of Port Adelaide by George French Angas, 1846. McLaren Wharf is visible in the left background of the image

From Sail to Steam 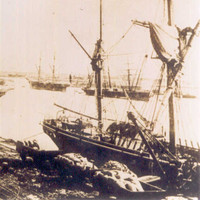 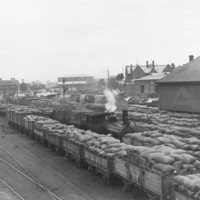 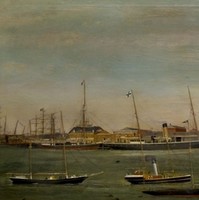 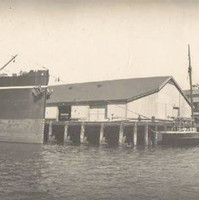 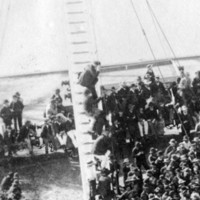 A crowd of striking waterside workers attend a meeting at the government flagstaff near McLaren Wharf, 12 October 1887 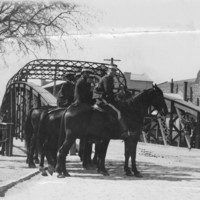 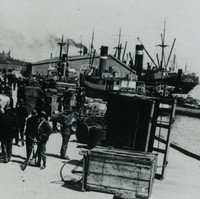 McLaren Wharf in the wake of a Waterside Workers’ demonstration and riot against non-union labour, 27 September 1928 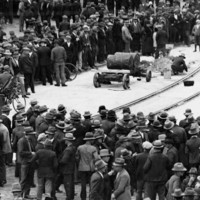 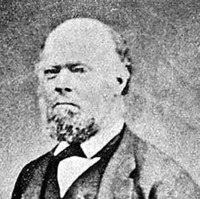 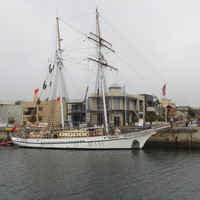 The tall ship One and All moored alongside McLaren Wharf, 31 August 2012
Courtesy of/Photographer:Emily Jateff, History SA