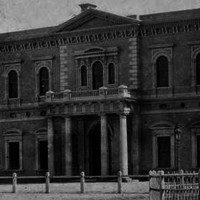 An Adelaide-based organisation, the Mechanics Institute, takes possession of books owned by the South Australian Library and Scientific Association and hosts a wide range of educational and informative lectures for the public
1848

Following the onset of economic depression, the Mechanics Institute amalgamates with the South Australian Subscription Library
1855 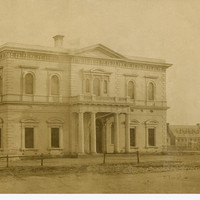 The University Association, which does not yet have its own building, hosts university classes in the Institute Building
1882 - 1883

The South Australian Institute's museum and art collections, as well as part of the library, are moved from the Institute Building to the new Jervois Wing following its completion
1884

The South Australian Institute is renamed the Public Library, Museum and Art Gallery of South Australia, and the building expanded to accommodate the Institute's growing library, museum and art collections
1907 - 2014

The South Australian Institute is descended from the South Australian Library and Scientific Association founded in London soon after the Act to establish the province of South Australia was passed by the British Parliament in 1834. Its purpose was ‘the cultivation and diffusion of useful knowledge throughout the Colony’. This society chose 117 books and shipped them to Adelaide on the Tam O’Shanter in 1836.

Once in Adelaide, the books became the library of the Mechanics Institute. Formed in 1838 to take up the functions of the Library and Scientific Association, this local Mechanics Institute hosted a wide range of educational and informative lectures for the public. Flagging after the onset of economic depression in the 1840s, the Mechanics Institute amalgamated with the South Australian Subscription Library in 1848. The new organisation had a combined membership of about 475.

The South Australian Subscription Library and Mechanics Institute lacked resources and a permanent home, meeting first in the Peacock Building in Hindley Street and then in Neales Exchange in King William Street. Together with the Adelaide Philosophical Society (Royal Society of South Australia from 1880), they lobbied for government support for a cultural and educational institute.

The South Australian Institute, established and incorporated under legislation in 1855, was ‘to comprise a Public Library and Museum, and, by means of public lectures, classes, and otherwise, to promote the general study and cultivation of all or any of the various branches or departments of art, science, literature and philosophy’ and to encourage and assist kindred societies. The library was required to provide free public access to a reading room on every day of the week except Sunday. Books could be borrowed on the payment of a membership fee of 2s 6d and annual subscription of between £1 and £2. The Institute was controlled by a six-member board – three appointed by the governor and three elected by affiliated incorporated societies. The government allocated a minimum of £500 annually.

Before long it was apparent that the expanding organisation required more appropriate premises. Petitions to parliament called for funding to enable the erection of a building suited to its legislated purposes. In 1858 Colonial Architect Edward Angus Hamilton was instructed to design an Institute Building. The new building, in Victorian Renaissance style, was completed in July 1860. The official opening by Acting Governor Sir Charles Cooper, the chief justice, took place on 29 January 1861.

Standing alone on North Terrace, the Institute Building generated interest and admiration. Its central entrance hallway featured a grand staircase. The ground floor housed the circulating library, a large reading room with a raised platform at one end for lectures, a coffee room, an office for the Institute’s secretary and a boardroom. A central passageway led to the housekeeper’s apartment at the rear. On the first floor were three large rooms intended for classes and meetings of societies. Behind them a 21.3m long room designed by Hamilton for the art gallery and museum was lit by skylights fitted with rope-drawn blinds. Heating in winter came from fires in fireplaces decorated by carved timber surrounds.

The building was lit by gas from 8 December 1863. In 1873–74, the gasoliers (chandeliers that burnt gas) in the reading room were replaced by ‘sunburners’, new gas lighting and air-conditioning devices. Incandescent lights were installed in the library in 1894. Full electric lighting of the building was not provided until 1921.

The Institute Building quickly became a focal point of Adelaide’s cultural life: 40 societies were affiliated with the South Australian Institute by 1867. The library had grown to 13 000 books, with 900 subscribers and book circulation of 56 000. By 1871 visits had reached 1000 per week, and 200–800 people using the building on each public holiday. Such was the demand that a policeman was placed on duty during opening hours. In 1879 the reading room and museum were opened on Sundays.

The Adelaide Philosophical Society and School of Design were also housed in the building. The Institute was the only body in Adelaide providing public technical and further education. Although there were some private secondary colleges, the colony’s education system at that time did not go beyond primary school. This educational role increased from 1874 when the University Association, which did not yet have premises of its own, began conducting university classes in the building.

The museum collections and part of the library were moved from the Institute Building to the new Jervois Wing in 1882–83, in anticipation of creating independent and growing cultural institutions. (The Jervois wing is now known as the Mortlock Wing of the State Library of South Australia.) The Art Gallery moved first to the Jervois Wing, then to the Exhibition Building, before occupying a building of its own. The School of Design moved to the Exhibition Building in 1890–91, although it continued to be run by the Institute until taken over by the Education Department in 1909.

In spite of the construction of other cultural buildings on North Terrace, the Institute Building continued to be well used and cramped for space. Plans went ahead for extensive additions on the north side, including a separate two-storey caretaker’s residence facing Kintore Avenue, under the direction of Superintendent of Public Buildings Charles Edward Owen Smyth. Internal changes involved relocating the North Terrace entrance stairway to the new northern section. The extension was opened on 12 June 1907 by Governor Sir George Le Hunte.

Since 1907 internal alterations and upgrades have been made to the building. The most significant of these was the conversion of the Royal Geographical Society’s rooms into a lecture theatre in 1965 after the society moved to the Jervois Wing. While the State Library controls and uses the building, various organisations have worked from it, including the Institutes’ Association of South Australia (1912–80), the Women’s Information Switchboard (1978–97), the Women’s Studies Resource Centre (1979–84), the History Trust of South Australia (1981–97) and the Friends of the State Library of South Australia (2007–). The Bradman Collection was exhibited in the building (1998–2008), before moving to its own museum at the Adelaide Oval.

The Institute Building continues to house and provide an important public exhibition venue for the South Australian Society of Arts. Its meeting rooms and the Anne and Basil Hetzell Lecture Theatre are widely used. 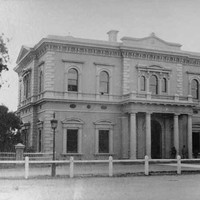 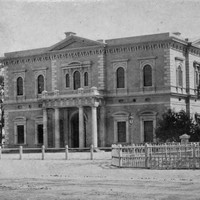 Image courtesy of the State Library of South Australia, SLSA: B 39362/1, Public Domain 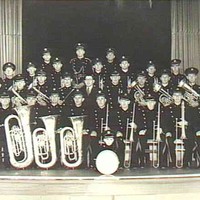 The South Australia Railway Band poses for a photograph in the Institute Building, 1946 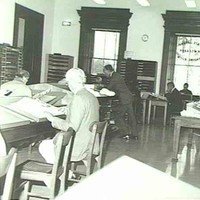 Image courtesy of the State Library of South Australia, SLSA: B 49450, Public Domain 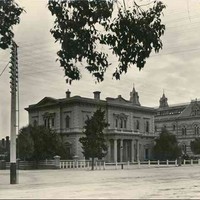 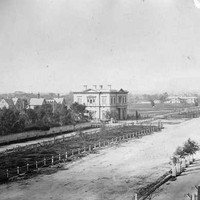 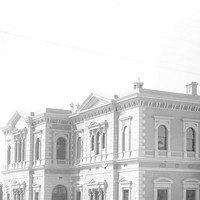 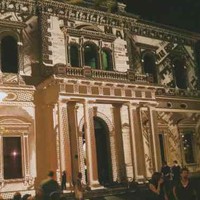 The Institute Building, as it appeared during the Adelaide Festival of the Arts' 'Northern Lights' exhibition, 15 March 2008
Courtesy of/Photographer:Stephen Giles