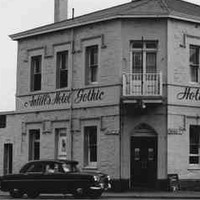 Brown Street is named by a Street Naming Committee
1838

The tavern, now the Whitmore Hotel, one the oldest hotels in the city, sat on the northwest corner of Wright Street and Brown Street
c. 1879

45 households were interspersed with small business premises including a paper bag manufacturer and a draper
c. 1935

The character of Brown Street shifted towards small business and industry

68 households, concentrated south of Whitmore Square, were listed together with shops and an increasing number of businesses
1967

Colonel William Light set out the plan for Adelaide’s streets, but they were named by a Street Naming Committee on 23 May 1837. Emigration Agent John Brown was one of its members. His diary gives a lively account of factional conflict within the committee.

The street named after John Brown formed the southern section of one of four thoroughfares running north–south. Commencing at South Terrace, it passed through Whitmore Square, before ending at Grote Street, which ran east–west through the town centre, Victoria Square. Other cross streets from South Terrace were Gilbert Street, Sturt Street, Wright Street, Gouger Street and Grote Street.

The northern section of the thoroughfare from Victoria Square to North Terrace was named Morphett Street. In August 1967 Brown Street was incorporated into Morphett Street.

John Brown (1801?–79) was a republican and a chartist. He was also a strong believer in the liberty of the press. Brown actively pursued these views following his arrival in South Australia; supporting newspapers that offered alternative perspectives to those of the governor and arguing for self-government.

Brown was an active supporter of the South Australian Association, formed by Robert Gouger in December 1833. With others, Brown signed the financial guarantee to enable the colony to be founded. His appointment as emigration agent was opposed by the chair of the Colonisation Commission, Colonel Robert Torrens, but successfully championed by Sir Moses Montefiore, George Fife Angas and Fowell Buxton MP. As an appointee of the Commission, Brown was subject to the Colonisation Commissioners rather than the governor, an arrangement that led to conflict in the administration of the colony.

Brown left England for South Australia with his wife and sister on the Africaine in July 1836. It was at this point that he began writing the diary that provides valuable insights into their journey and subsequent colonial life. Although he lost many papers and possessions when his house burnt down at the end of November 1839 (Southern Australian, 4 December 1839), some papers relating to Brown’s early association with the colony and a copy of his diary (11 February 1834–3 July 1836) are in the State Library of South Australia. The family arrived at Holdfast Bay on 8 November 1836.

Emigration Agent Brown greeted new arrivals and helped to place them in employment. He was one of several prominent colonists, including Colonel William Light, Robert Gouger, James Hurtle Fisher, Boyle Travers Finniss, John Barton Hack and John Morphett who disliked and generally disagreed with Governor John Hindmarsh. His personal conflict with Hindmarsh led to him being sacked on 11 September 1837, only to be reinstated the following year. Although he finally resigned from his position in 1839, Brown continued to assist new arrivals at Emigration Square, in Adelaide’s west park lands.

John Brown was active in public life. In October 1840 he became a member of the first Adelaide Municipal Corporation, serving until 1843. He was secretary of the League for Religious Freedom, which successfully opposed state aid to churches in 1846. Brown was also secretary of the Statistical Society and a supporter of the short-lived South Australian High School which opened in opposition to the Collegiate School of St Peter in 1850. He co-founded the Adelaide Times and contributed to the Southern Australian, newspapers which provided alternative views to the South Australian Register published by George Stevenson, private secretary to the governor.

In business, Brown was a director the South Australian Mining Association. Later he became the manager of the Adelaide Life Assurance & Guarantee Co., a position that he held for 30 years until forced to retire due to failing health. Brown died in 1879 following an accident where he slipped over and broke his collarbone in King William Street.

The settlement of Brown Street

Light’s plan printed in 1840 shows that 12 of the 20 ‘town acres’ lining Brown Street had been purchased: 11 had been sold in England, prior to the arrival of the colonists in 1836. The one further acre sold (no. 693) had been bought at auction once Light’s survey for the town was complete. The pattern of early purchases and construction shows that the south of Adelaide was less sought after than northern sections. Proximity to the River Torrens concentrated settlement along North Terrace, especially where the road from Port Adelaide entered the city, and in nearby streets.

Several prominent colonists took up land on Brown Street. John Morphett held acres 614 and 631 on the east side towards South Terrace. Colonial Treasurer Osmond Gilles pre-purchased acre 692 on the northeast corner of South Terrace. Acre 693 bought by Protector of Aborigines Dr William Wyatt was opposite Gilles’.

George Strickland Kingston’s map of 1842 shows most acres along the street vacant: only six buildings had been constructed on four of the acres. A few small stone, pise or lath and plaster cottages and outbuildings were clustered in the acres between Wright Street and Gouger Street.

The Queen’s Arms Tavern or Inn, opened by 1 December 1838, sat on the northwest corner of Wright Street and Brown Street. The publican to 1846, Thomas Maslin from Wiltshire, England, had arrived on the Tam O’Shanter in 1836. Maslin later took up farming Willunga south of Adelaide – nearby Maslin’s Beach is named after him. The hotel began as a two-storey bluestone building. It was enlarged in 1912 by a freestone addition and again in 1952 by a large single-storey lounge area. One of the oldest hotels in the city, the Queen’s Arms Hotel has traded under several names: since December 2008 it has been the Whitmore Hotel.

By the time Townsend Duryea took his panoramic photographs of the City of Adelaide in 1865, the number of dwellings, shops and small workshops on Brown Street had grown but much vacant land was still visible.

Boothby’s Adelaide almanac of 1864 lists only eight households on Brown Street (excluding Whitmore Square) with occupants including a butcher, confectioner, veterinary surgeon, carpenter, storekeeper and blacksmith. One of these buildings, a house and shop constructed in the 1850s for blacksmith Robert Hogan, still stands at 293 Morphett Street.

Increasing density in the 1870s

Ten years later, laneways and side streets not in Light’s plan intersected the land bordering Brown Street. They connected dwellings built around subdivided acres, although buildings were still concentrated towards the northern end of the street and the centre of the city. Panoramic views of Adelaide provided in the Australasian Sketcher in July 1875 and the Illustrated Sydney News in July 1876 show Brown Street cut a much clearer line through the acres than in the previous decade. Much less open space was evident.

The main occupations listed for the 45 households on Brown Street included many of the trades typical of a growing nineteenth-century town: carpenter, ironmonger, plumber, mason, storeman, tailor, bootmaker, carter, and baker. But other occupations, indicative of growing social and economic complexity, had begun to appear: police constable, accountant, compositor, clerk, engineer and school inspector.

Business premises, sometimes attached to dwellings, were listed in the directory of 1875. These included shops attached to specific trades, a paper bag manufacturer and a draper. The Queen’s Arms Hotel was under publican Charles Ferors. In the 1870s it was associated with the Adelaide Brewery in Pirie Street.

By the end of the 1870s the character of Brown Street as a largely residential street, interspersed with small business premises, was established. The Book Plan of South Adelaide 1880 shows only three spaces remaining on the east side. It also shows that wealthier citizens were choosing to construct larger homes nearer to South Terrace, away from the hustle and bustle of central Adelaide.

Turn of the century Brown Street

In the 1920s Brown Street remained mainly lower income residential with a scattering of small businesses: 75 residences were listed in 1925. The impact of motor vehicles on occupations and businesses was becoming evident with the appearance of a ‘car proprietor’. Small shops such as the ham and beef shop, boot shop, and confectioner and cool drinks store served residents. Other business, including Welch & Sons Bakers and Confectioners and J Wong Wing Laundry probably served a wider clientele. In 1925 a Printers Trade School operated on the corner of Brown and Gouger Streets.

By the mid 1930s the character of Brown Street had begun to shift towards small business and industry: 68 households, concentrated south of Whitmore Square, were listed together with shops and an increasing number of businesses. The ham and beef shop and Welch & Son Bakers and Confectioners were still operating. Sing Lee had taken over the J Wong Wing Laundry. New enterprises included Kinnane Uzona Co., Halliday Hardware Co., a shirt manufacturer, Claude Neon Ltd and a wood merchant. The vehicle industry was represented with Andrew & Pearce Motor Renovators and Kelly’s Service Station on the corner of Grote Street.

The character of Brown Street as a city backwater, retaining lower income residents, low-rise construction and small-scale businesses continued into the 1960s. In August 1967 Brown Street was incorporated into Morphett Street. However, the area south of Grote Street has retained its out-of-the-way feel into the twenty-first century. 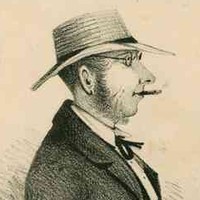 Image courtesy of the State Library of South Australia SLSA: B333, Public Domain. 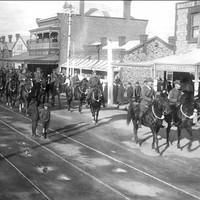 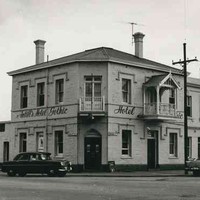 Image courtesy of the State Library of South Australia, SLSA: B15577, Permission to publish required. 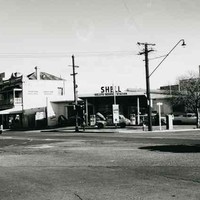 It looks like you've already done quite a bit of research there Barbara. If you haven't already we'd recommend checking out some of the State Record guides in where to look - https://archives.sa.gov.au/finding-information/using-our-collection/star...
They also have a webinar coming up soon which might be useful - https://www.eventbrite.com.au/e/family-history-at-state-records-of-south...
Best of luck on your hunt for details!

Hello, I am looking for any inforamtion on early colonist George Mildred who came to SA on the Rapid with his nephew Hiram Mildred and Colonel Light in 1836. George was the younger brother of Henry Richard Mildred S.M. & M.P. in Adelaide. George and his wife Mary Ann lived in both Ship Street, and Brown Street during 1830's and 1870's. He died in 1874 on Kangaroo Island. I am a desendant of George Mildred. I an hoping someone can fillin some gaps for me as to where he worked besides the Port Hotel in 1840-1841 in Port Adelaide. Many thanks, Anne

Hi Graeme,
I haven't come across an image of the Queens Arms in that era yet, but the places I'd search are the State Library collectoin - https://www.catalog.slsa.sa.gov.au/ Trove - https://trove.nla.gov.au/ and City of Adelaide archives - https://www.cityofadelaide.com.au/community/creativity-culture/city-arch...

Hi Catherine. My ancestor William Roberts was the publican of the Queens Arms Hotel (this hotel) from 9 March 1846 - 14 Sept 1846. As part of my research i am keen to obtain a photograph of the hotel during the period where he was the licence holder, if possible however, at least in its original state before any extensions/renovations. If you could assist or at least point me in the right direction i would appreciate. Best wishes Graeme Adcock

Hi Veronica,
I'd say your best bet for something like this is checking the census: http://guides.naa.gov.au/records-about-south-australia/chapter8/census-s... If you can't find anything there I recommend the family history help sheets from the State Library of South Australia for advice on where else to look: http://guides.slsa.sa.gov.au/FHservice
Best of luck with your research.

My grandfather (maternal) William Charles Moyle and his family lived in Brown Street Adelaide circa 1917. He was the proprietor of a leathergoods manufacturing business W.C. Moyle & Sons , located then in Waymouth Street, Adelaide. I would like to ascertain the number of his abode. CAN YOU PLEASE HELP ME IN THIS QUEST.