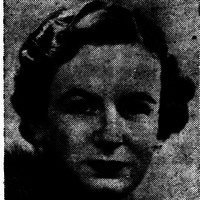 Jean Beatrice Mair was born in Ascot Vale, Victoria in 1901.  Her parents were Ernest Stewart Mair, a furniture and carpet salesman for George & George, Melbourne and her mother was Beatrice Lottie Moffitt. Jean was an only child and her childhood and youth were spent in Victoria.

Jean married Arthur George Barrett in June 1922 in Melbourne at a large wedding in the chapel of the Church of England Grammar School, Melbourne where Arthur had been a pupil.

Arthur Barrett, born in Geelong in 1895 had moved to Adelaide in 1913 and after the wedding Adelaide became their home.

Jean and Arthur were to share a very busy public life.  Arthur had served in World War One.  He was a member of the Adelaide City Council from 1931 to 1953 serving as Lord Mayor between 1937 and 1941.  He had been re-elected as Lord Mayor for the third successive year when World War Two broke out.

Four years as Lady Mayoress of Adelaide (1937-1941) gave Jean Barrett many opportunities for showing her power of organizing and of shouldering responsibility not only in that role but also very actively for the Red Cross. While her husband was the South Australian Divisional Chairman Jean Barrett served on the SA Red Cross Divisional Committee.  She sponsored many fund-raising ‘button’ days and other functions, including fairs, arranged civic receptions and organized two mayoral balls.

After the war began she inaugurated the hard-working Lady Mayoress’s Red Cross Circle.   There was a vast amount of work to be done at this time, as, not only did Red Cross continue to assist returned soldiers from the First World War, but support now had to be rallied for those fighting in World War Two. The Red Cross Sewing Circles manufactured thousands of items, including bed linen, clothing, dressings and knitted items.

Jean Barrett was also president of the Women’s Voluntary National Register for South Australia where women and girls were registered for many types of national service.  She was a South Australian delegate at the Commonwealth conference of the WVNR held in Sydney in 1941.  She was also a staff officer on the executive of the Women’s Air Training Corps, and, with members of the WATC, organized a series of addresses to women’s organizations to stimulate recruiting in the Air Training Corps for boys.

After 1941 the Barrett’s (now Sir Arthur and Lady Barrett) continued to lead a very active public and social life.  This included their work with Red Cross. Lady Barrett was also, for many years, on the advisory board of Mareeba Babies’ Home.

Lady Barrett had two daughters.  Her greatest private interests in her very active life were music and tennis. 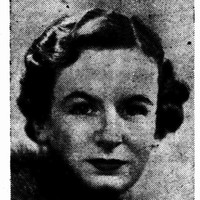 Image courtesy of the National Library of Australia Trove Website, originally The News