Although financial hardship was seldom the personal problem for Mary Warnes that it was for many of her contemporaries, she was never to forget the loneliness of her early married life. She was physically isolated from other women and childless for the first years of her marriage. On the occasional sale-day trips to Burra (a 100-mile round trip by horse and trap), she would fabricate excuses to talk to other women by buying such trifles as a few pennyworth of ribbon.

She was born Mary Jane Fairbrother at Fullarton, South Australia, on 18th July 1877, the youngest daughter of gardener Thomas Fairbrother and his wife Jane Mears (née Clarke). Following her education at the Misses Newman’s private school at Parkside, she assisted with the family’s thriving Fullarton Jam Factory in Fern Avenue until on 12th February 1900 she married pastoralist Isaac Warnes. This was to bring about a complete change of environment and lifestyle, for Warnes took his bride to live at Old Koomooloo Station, a vast and isolated property east of Burra in the mid-north, where she became an accomplished side-saddle horse-woman though not (as her grandchildren attest) a notable cook, for this was the era of servants for Australian women of her class.

In 1908 the Warnes moved to the ‘inside’ property ‘Wahroonga’ at Leighton, only twelve miles west of Burra. It was here that Mary gave birth to three sons, and her husband became prominent in local government and pastoral circles. Mary could have continued to live in the style of a gracious hostess had her concern for the welfare of less fortunate women not been so keen.

She was fully attuned to the potential for an organization embracing the needs of rural women, a movement which by the mid-1920s had become established in Australia’s eastern states as part of a global movement to improve conditions for countrywomen. In 1926 Mrs. R.T. Bowman, President of the National Council of Women, invited a group of well-known South Australian women to afternoon tea at the Queen Adelaide Club, where she explained the fledgling movement. Of those present, only Mary Warnes had the vision and the courage to pioneer the concept in South Australia by forming at Burra the first branch of what was to become the Country Women’s Association of South Australia. She was the founding President of this branch and from 1929 the state President. For twelve years she held that office, travelling widely within South Australia and far beyond --- to many interstate meetings and as a delegate to the 1929 Rural Women’s Conference in London. In 1930 the Register commented, ‘Hers is often the guiding hand that steers a smooth path for women on whom the burdens of drought and bad seasons have weighed too heavily.’

Perceiving that the new medium of radio broadcasting could be a valuable element in fighting rural isolation, she began, as early as 1934, to give friendly and informative radio talks. In recognition of her work within the C.W.A., as well as with a range of other community, church, and political organizations, she was appointed M.B.E. in 1936. The following year she went to Alice Springs and Darwin on the largely unmade roads of the era, travelling in a utility driven by her second son Jim, speaking with women in isolated areas and conferring with members of John Flynn’s Australian Inland Mission. ‘I am grateful,’ she said at the time, ‘that I have been spared to live long enough to serve members so far away.’

She was a member of the National Council of Women of South Australia and of the League of Nations Union and a Councillor and President of the women’s branch of the State Liberal Federation. Mary Warnes died on 19th June 1959 and was buried at Burra Cemetery. Memorials to her exist at the C.W.A. complex in Kent Town, at St. Mary’s Church, Burra, and in the National Pioneer Women’s Hall of Fame at Alice Springs. 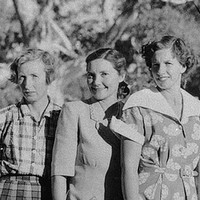