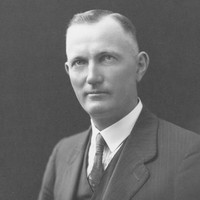 Lyell Alexander McEwin (1897–1988) received a frugal Mid North upbringing which taught him the motto, ‘waste not, want not’, that characterised his 40 years in the Legislative Council, 1934–75.

With 26 continuous years in Premier Tom Playford’s government, McEwin presided over the Council from 1967–75, having been knighted in 1954. His ministries developed uranium resources at Mount Painter and Radium Hill, built the Queen Elizabeth and Lyell McEwin hospitals, and extended the police force and prison farm system. A prominent Freemason and devout Congregationalist, McEwin personally rejected his church’s amalgamation with the Uniting Church, and sparked controversy when he used his deliberative vote to defeat the 1973 bill which sought to legalise homosexual acts between consenting adult males. 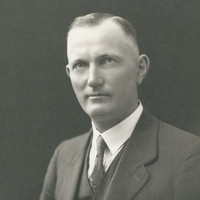 Image courtesy of the State Library of South Australia, SLSA: B 10080, Public Domain

When the City of Elizabeth was planned, land was made available for a hospital. The hospital was not only a necessity to the new city, but also as Elizabeth was on the major highway to all the northern towns it was ideally situated to be the major teaching hospital north of Adelaide.
The Lyell McEwin Hospital was formally opened by Sir Lyell McEwin, Minister of Health, on 22nd April 1959. The Hospital was designed by the South Australian Housing Trust and was financed by the government and the Salisbury District Council.

Would you be willing to write an entry on the Lyell McEwin Hospital Daina? You can get in touch with me directly at the History Trust if you want to talk about it.