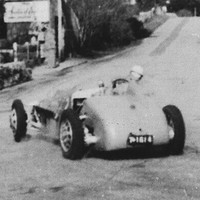 Eldred de Bracton Norman was born in Adelaide, South Australia, on 9th January 1914, the son of solicitor William Ashley Norman and his wife Alma Janet (née Matthews). He attended Scotch College but failed to complete a law degree at the University of Adelaide, as his real interests were in all things mechanical. In 1938 he set up an engineering and car dealership in Halifax Street, Adelaide. At the outbreak of World War II he was rejected for military service due to asthma. Wartime petrol rationing reduced the motor trade to a trickle so Norman manufactured garden implements and Ace gas producers (which enabled cars to run on charcoal rather than petrol).

On 15th May 1941 he married Nancy Cato, a journalist with the Adelaide News. They enjoyed a bohemian lifestyle and had a variety of interests. Keen on astronomy, Norman built himself the largest privately-owned telescope in Australia and Nancy painted and wrote poetry. Eldred would often take their three children to motor sport activities to leave Nancy free to write.

In 1946 he began dealing in war surplus army vehicles. On a purchasing trip to New Guinea he began building a racing car, the ‘double bunger’. Powered by two Ford V8 engines, the large machine had water-cooled brakes that produced spectacular clouds of steam when applied. He constantly rebuilt the car between 1948 and 1951, competing successfully in hill climbs and races in Victoria, South Australia and Western Australia. In both the 1950 and 1951 Australian Grand Prix the ‘double bunger’ broke down, although it led the field in the latter race. He then bought a 1936 Grand Prix Maserati. Stories abound of him outpacing police in the noisy, unregistered vehicle between his Hope Valley home and the Halifax Street workshop where he would hide the car.

He competed successfully throughout Australia in various forms of motor sport. In 1954 he fitted a Triumph TR2 sports car with a supercharger and drove it to Queensland, towing a trailer of racing fuel. Winning a support race on the morning of the Australian Grand Prix gained him entry to the race itself and he came fourth.

Norman was an active member of the Sporting Car Club of South Australia and, when racing on public roads was banned in South Australia in 1951, he worked to establish a racing circuit at the Port Wakefield airport. For the 1955 Australian Grand Prix there he built a new car in ten weeks. The Zephyr Special was noteworthy for its use of proprietary parts and the revolutionary use of the engine as a stressed chassis member. Despite catching fire, the new car finished eighth in the Grand Prix and was one of the last Australian built ‘Specials’ to hold its own against imported racing cars.

Norman stopped racing in 1956, believing that he had insufficient resources to continue in top-level competition. Although lacking formal training, he thought deeply about engineering problems and would hurl himself into constructing innovative solutions. He patented a number of inventions, including a car tow-bar and a device for photographing burglars. In 1964 he began production of a supercharger of his own design that dramatically improved the performance of Holden engines. He gave potential customers terrifying demonstrations of its efficacy in an old utility, hurtling between other cars along major roads near his Payneham service station. In 1967 he and his wife (by then a successful novelist) moved to Noosa Heads, Queensland. Two years later he published a book on supercharging.

Nancy Cato described her husband as ‘a tall, spare man with immensely strong wrists and hands’ and he was a racing driver of considerable ability. Although his solutions to engineering problems were audacious and inventive, his actual mechanical work could be crude.

Eldred Norman died on 27th June 1971 and was cremated. 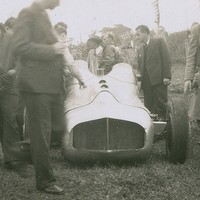 A Ford Mercury racing car owned by Eldred Norman on display at the public road circuit at Woodside in the Adelaide Hills, 1949 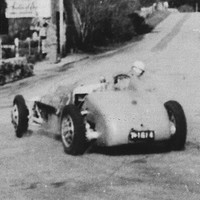 I was assistant mechanic for Zephyr special at Port Wakefield G.P.

I saw Eldred Norman race his Zephyr Special ( originally called the Norforhopadoor) at Port Wakefield in the 50's. & drove the car on the road to the meetings. I believe the car is now in NSW and raced in historic events.

Fantastic Ron, that must have been quite an experience!