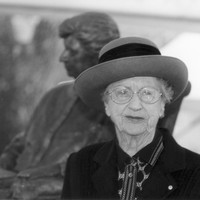 Roma Flinders Mitchell was born in Adelaide, South Australia, on 2nd October 1913, the daughter of Harold Flinders Mitchell and his wife Maude (née Wickham). Her father practised law for a short time in Renmark before serving, during the First World War, in France, where he died in April 1918. After the war, the Mitchell family moved back to North Adelaide.

Maude Mitchell was determined that her daughters, unlike herself, would have educations and careers. Roma was educated at St. Aloysius’ College and studied music, dancing and law. From a young age she made up her mind to become a lawyer and developed a strong sense of social justice. At the University of Adelaide she was active in student politics and, when barred from joining the Law Students’ Society because she was a woman, she became instrumental in the formation of the Women Law Students’ Society.

Awarded the David Murray Scholarship as the most brilliant law student of her year, she was admitted to the Bar in 1934 and articled to the firm of Rollison and Rollison. In 1935 she worked for the firm of Nelligan and Angas Parsons, becoming a partner after six months. She practised as a barrister, resisting the attitude that law was for men only, and in 1940 she assisted with the drafting of the Guardianship of Infants Act.

In 1962 she represented Australia at the United Nations seminar on the Status of Women in Family Law and later that year she became Australia’s first female Queen’s Counsel. She supported the efforts to allow women to sit on juries, eventually persuading the Premier, Thomas Playford, to change his mind on that issue. As Q.C. she continuously advocated equal pay for equal work. In 1965 she became a member of the Council of the University of Adelaide and also Australia’s first female judge of the Supreme Court. During these years she continued lecturing at the University of Adelaide in family law. From 1970 to 1981 she chaired the South Australian Criminal Law and Penal Methods Reform Committee, which led to major reforms in areas such as rape, suicide, the bail system, protection of the rights of the accused and compensation for victims of crime. She also chaired the Parole Board from 1974 to 1981.

In 1971 Roma Mitchell was appointed C.B.E. and was elected Deputy Chancellor of the University of Adelaide. In 1981 she became the founding Chairwoman of the Australian Human Rights Commission, holding this office until 1986 when it became the Human Rights and Equal Opportunity Commission. By this time she had become a campaigner of international acclaim. She thought the passing and implementation of the Human Rights Commission Act a landmark piece of legislation and considered this the most important committee on which she had served.

In 1982 Roma Mitchell became a Dame Commander of the British Empire and in 1983 Acting Chief Justice of South Australia. Also in 1983 she became the first female Chancellor of the University of Adelaide and held this position until 1990. In 1985 she was awarded the honorary degree of Doctor of the University. In 1991 she was made a Companion of the Order of Australia and was also appointed Governor of South Australia, again the first woman to hold such a position. She retired in 1996.

Dame Roma Mitchell received her final honour, Commander of the Royal Victorian Order, from the Governor-General, Sir William Deane, on her hospital bed shortly before she died on 5th March 2000. She was accorded a State funeral in recognition of her professional work and as a Governor of South Australia. She was cremated. A statue of her stands in the Prince Henry Gardens on North Terrace, and the Winston Churchill Memorial Trust, of which she was national President, has named a fellowship for excellence in the performing arts after her. 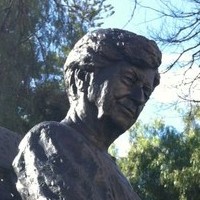 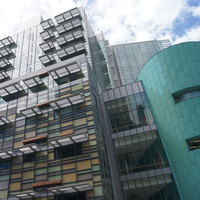 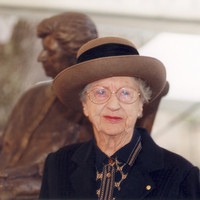 Associated with:
League of Women Voters