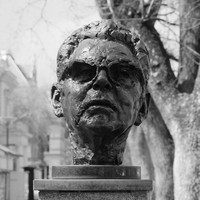 The bronze bust of Sir Mark Oliphant sits in the Prince Henry Gardens, North Terrace, close to the grounds of Government House where he served as the state’s first South Australian-born governor.

Sir Marcus (Mark) Laurence Elwin Oliphant was born in Adelaide on 8 October 1901. He initially studied part-time at the University of Adelaide while working to support himself, but his exceptional experimental skills led to him being awarded a cadetship in physics in 1919. Oliphant completed an honours degree in science in 1922. Three years later he was awarded an Exhibition Scholarship at the Cavendish Laboratories in Cambridge, England where he worked on sub-atomic physics. Oliphant discovered the nuclei of Helium 3 and Tritium and that heavy hydrogen nuclei could be made to react with each other – nuclear fusion, which is the basis for a hydrogen bomb.

In 1937 Mark Oliphant was made a Fellow of the Royal Society of London and appointed the Poynting Professor of Physics at the University of Birmingham. Oliphant and his university team developed short-length radar, enabling it to be used in the detection of German submarines during the Second World War. He was recruited to the Manhattan Project in America late in 1943, where his experimental expertise proved invaluable in the production of enriched uranium for the first atomic bombs. He later stated that while he was proud that the bomb had worked, he was ‘absolutely appalled at what it had done to human beings’. Oliphant later spoke out against nuclear weapons. He became a member of the Pugwash Conferences on Science and World Affairs established to find peaceful alternatives to global security threats.

Oliphant returned to Australia after the Second World War to be the first director of the Research School of Physical Sciences at the Australian National University (ANU; 1950–63) and the inaugural president of the Australian Academy of Science (1954–56). Oliphant continued as a professor at the ANU until his retirement in 1967. During the 1960s he argued in opposition to the Vietnam War.

In 1971 Premier Don Dunstan convinced Oliphant to become South Australia’s governor. He served in this capacity until 1976. In 1977 he assisted in the founding of the Australian Democrats political party. Sir Mark Oliphant died on 14 July 2000.

The bust on North Terrace

The erection of a monument to honour the public service of Sir Mark Oliphant was a popular initiative in his state of origin. The bronze bust was paid for by public subscription and by the Adelaide City Council. Renowned South Australian sculptor Dr John Stuart Dowie AM was commissioned to produce the work not long after Oliphant’s period as governor ended. Oliphant sat for Dowie during the creation of the sculpture and was apparently very pleased with the result.

The bust was erected on a granite pedestal in the Prince Henry Gardens on North Terrace, Adelaide. It was unveiled by Governor-General Sir Zelman Cowen, before a crowd of about 100 on 2 March 1978. Sir Mark was unable to attend on account of illness. 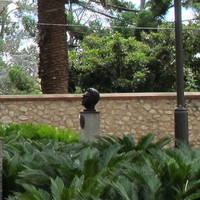 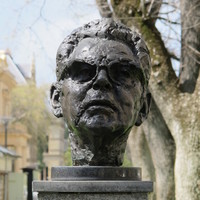 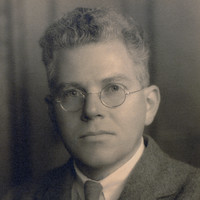 Courtesy of the National Portrait Gallery, Canberra. Gift of Ms Vivian Wilson 2004. Not to be reproduced without permission. 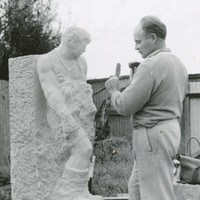 Image courtesy of National Library of Australia, pic-vn4667297. Not to be reproduced without permission.