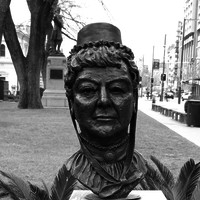 Mary Lee (1821–1909) was a passionate campaigner for the rights of women at a time when they had few legal rights, poor wages and working conditions, and restricted opportunities to participate in public life. She saw the right to vote and to stand in elections, and unionisation as important steps to redressing women’s secondary position in society.

A widow who had given birth to seven children, Mary Lee migrated to Adelaide from Ireland with a daughter in 1879 at the age of 58 years to care for a sick son. She stayed on after the death of her son in 1880, perhaps unable to afford the fare home. Lee remained poor for the rest of her life, but poverty and her increasing age did not stop her from playing a leading role in campaigns in support of women.

Mary Lee was the ladies secretary of the Social Purity Society, which succeeded in raising the age of consent for girls from 12 to 16, and later served on the committee of the Female Refuge. She played an important role in the formation of the South Australian Women’s Suffrage League in July 1888. As its co-secretary and then secretary, Lee astutely steered campaigns, organised petitions and deputations, wrote letters to newspapers and spoke at public meetings. The efforts of the League and its supporters were finally rewarded with the passing of the Constitution Amendment Act on 18 December 1894. South Australia became the second place in the world to grant women the right to vote and the first to enable them to stand for parliament.

At a public meeting on sweated labour in the Adelaide Town Hall in 1889, Mary Lee called for the formation of women’s trade unions. She argued that collective organisation of female workers was required to address the long hours and low pay operating in the clothing and boot trades, in which women and children predominated. Lee became the founding secretary of the Working Women’s Trade Union (1890–92). She walked the streets, visiting factories and workshops to recruit women and to get employers to adopt the union’s log of rates. In 1893 Mary Lee, as vice-president of the Working Women’s Trade Union, became a delegate to the United Trades and Labor Council (UTLC; formed in 1884). Through the economic depression of the 1890s Lee also served on the UTLC’s Distressed Women and Children’s Committee.

In 1896 Lee was appointed as the first and only female official visitor to the Lunatic Asylum (1896–1908). This, like much of the work that she had undertaken so assiduously in South Australia, was unpaid.

On her 75th birthday in 1896, at a ceremony in the Adelaide Town Hall, Premier Charles Cameron Kingston acknowledged her contribution to the winning of women’s suffrage and presented her with a bound and decorated address and a purse of 50 sovereigns (nominally £50). The money had been raised by public donations to a Mary Lee Testimonial Fund, established in July 1895 in recognition of both her efforts and her precarious financial situation.

Mary Lee’s final years were impoverished, but she remained defiant and proud of her achievements.

The centenary of women’s suffrage in South Australia was celebrated in 1994. Events co-ordinated by the Women’s Suffrage Centenary Steering Committee included a dinner to raise funds for the refurbishment of the headstone on Mary Lee’s grave at Walkerville Cemetery. A model of Lee by sculptor Patricia Moseley displayed at the dinner was chosen for a bust to be erected on North Terrace, Adelaide. The production of the bust and its installation were rushed through in six weeks to coincide with the centenary of the passing of the Constitution Amendment Act.

The bronze bust of Mary Lee was unveiled on 18 December 1994 in the Prince Henry Gardens not far from a Jubilee 150 plaque also in her honour. Women’s Suffrage Centenary Steering Committee chairperson Mary Beasley paid tribute to Mary Lee and her work on behalf of the women of South Australia.

A plaque beneath bust quotes Mary Lee – ‘My aim is to leave the world better for women than I found it’.

The bust was designed by South Australian sculptor Patricia Moseley. Moseley studied at the Lorenzo De Medici School in Florence, which specialises in the arts, including studio arts, and languages. She has shown her work at numerous group and solo exhibitions across South Australia and is represented in many public and private collections. Commissions include sculptures of prominent South Australians Sir Donald Bradman AO, Ruth Tuck OAM and Hugh Stretton. Patricia Moseley is a fellow of the Royal South Australian Society of the Arts. 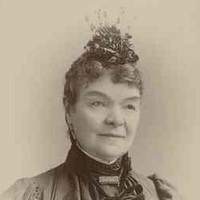 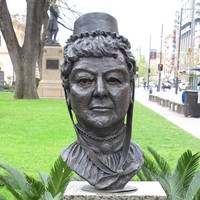 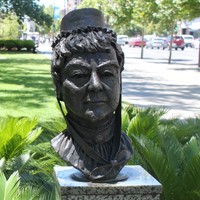