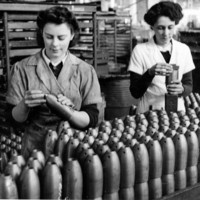 South Australia’s war effort intensified when the Japanese attacked Pearl Harbor in Hawaii and opened the Pacific front. Relatively safe from enemy action, three major government factories were built at Cheltenham, Hendon and Penfield (Salisbury explosives factory) during 1940 and 1941, and the Islington railway workshops (producing shells and components for Beaufort bombers), formed the backbone of the state’s war effort.
1945

This major international conflict officially began when Nazi Germany invaded Poland on 3 September 1939. It lasted for six years, gradually increasing in scope and intensity as it blazed through Europe into Africa and Asia and on into Pacific Asia and the Americas. Germany’s territorially and economically expansionist war aims divided the belligerent world into two groups: the Axis powers, supporting Germany, and the Allied powers, based on Britain, France and, from 1941, the Soviet Union. Australia, as part of the British Empire, supported the Allies. By January 1940 Australia’s three defence forces had joined the war.

Australia’s Defence Act (1903) specifically forbade established military forces to be used in foreign wars. Hence to join the fight overseas the Commonwealth raised the 2nd Australian Imperial Force (the 1st had volunteered for World War I) by recruiting volunteers. South Australia provided 54,660 volunteers (43 per cent of the state’s eligible 18 to 45-year-old men), the lowest enlistment rate of any Australian state. While only about 60,000 South Australians out of a population of just over 600,000 joined any wartime military service, the lag is explained by the state’s role in the provision of war materiel and general supplies to the Allied war effort.

South Australia’s war effort intensified when the Japanese attacked Pearl Harbor in Hawaii and opened the Pacific front. Relatively safe from enemy action (although a German submarine laid mines and fired at local shipping near Beachport in the South East), three major government factories, built at Cheltenham, Hendon and Penfield (Salisbury explosives factory) during 1940 and 1941, and the Islington railway workshops (producing shells and components for Beaufort bombers), formed the backbone of the state’s war effort. Feeder factories in regional centres such as Peterborough and Port Pirie in the Mid North and Murray Bridge and Tailem Bend on the River Murray, ammunition dumps at Smithfield, north of Adelaide, and Murray Bridge, shipyards at Whyalla on Spencer Gulf, and a host of commercial metallurgical, textile, bootmaking and clothing factories throughout the state, used all South Australia’s available labour; men, women and children. Special national security regulations made under the Defence Act (1939) controlled all aspects of life but were felt most keenly in the workplace, where, from February 1942, people were liable for direction into work chosen by the state’s director of manpower, Leslie Hunkin. Late in 1942 labour scarcity became crisis when the large factories went into full production just as food shortages (local and international) began to bite. Rural workers flooding into towns in search of higher wages and more sophisticated lifestyles had denuded farms and orchards, so that many workers were directed, not into munitions manufacture but food processing and other unattractive, low-paid work such as textile and hospital work. In South Australia the need to conscript, for example, shop assistants into the Salisbury explosives factory was especially confusing, since fluctuating demand frequently made large batches of factory operatives temporarily redundant.

The impact of the Second World War on South Australia

The impact of the war on South Australia may be briefly outlined. First, political and economic relations with the federal government changed permanently. For example, the raft of legislation producing what became known as Uniform Taxation removed from states the ability to raise certain taxes (particularly income tax) and made some of their services, such as health and education, dependent on Commonwealth grants. In addition, state government services such as Engineering and Water Supply, Highways, and Railways departments concentrated on national objectives so that post-war recovery was slow and incomplete. Second, Adelaide manufacturers such as Frank Perry, chairman of South Australia’s wartime Munitions Contract Board, gained experience in munitions manufacture and in winning contracts that attracted defence industry to post-war South Australia. This was especially so after British post-war long-range weapons and other defence technology research moved onto the 3672-acre explosives site at Salisbury after the war. Also, firms favoured by wartime contracts gained work, government subsidies, access to skilled workers and other benefits, which helped them develop a post-war presence in South Australia’s economy when they converted to motor car or white-goods production. Third, settlement patterns that changed to meet wartime exigencies further urbanised South Australia. Most regional centres were permanently bled of industry and population although some urban centres, such as Whyalla and Salisbury, were created, and population density shifted within the metropolitan area. 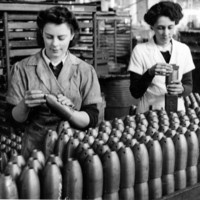 Image courtesy of the State Library of South Australia, SLSA: B 7798/421, public domain 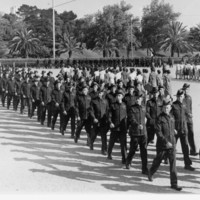 Image courtesy of the State Library of South Australia, SLSA: B 62413/87, public domain

Associated with:
Defence Science and Industry