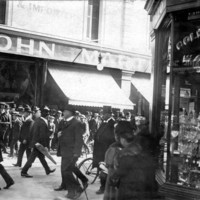 The Adelaide Arcade, with its draperies and department stores, symbolised Adelaide’s urban sophistication as well as serving the needs of the new middle class.
1933

John Martin’s first staged a Christmas Pageant to cheer up the Adelaide community during the Great Depression.
1968

The shopping centre, built in suburban Marion, would later become the ‘shopping town’ in 1995, covering hectares of space and providing retailing, entertainment and government services on a grand scale.
1976

Rundle Street was converted to a mall in 1976, despite opposition from local traders

In the early years of European settlement the distinction between retail trade, wholesale trade and importing in South Australia was unclear, with many businesses combining all three functions. As a key importer, the South Australian Company sold a vast array of goods through its own stores and held regular auctions in Adelaide to supply country storekeepers. The presence of a storekeeper or publican was one indicator of settlement, with stores built early in Noarlunga on the Fleurieu Peninsula, Port Pirie in the Mid North, Port Augusta in the Far North and Maitland and Kingscote in the South East. Hawkers supplied goods of all description to more isolated settlers.

In the city, general traders such as A.W. Bickford & Sons (1839) and Miller Anderson (1840) soon had competitors. By 1841 Adelaide contained about 200 stores, shops and warehouses, with Hindley, Rundle, Grenfell and Currie streets being the most popular locations. In the 1850s businesses began to shift to Rundle Street, producing a concentration of retail establishments that remains unique in Australia. F.H. Faulding’s pharmacy opened in Rundle Street in 1845 while the 1850s saw the establishment of other ‘landmarks’ such as the stationers Rigby, the jewellers Wendts and G.P. Harris Scarfe & Co. A store that became a local institution, John Martin & Co., was founded in the 1860s. On East Terrace, the East End Market (1861–1988) was one of the first successful produce markets before the City Market officially opened near Victoria Square in 1869.

With draperies and department stores, the Adelaide Arcade (opened in 1885) symbolised Adelaide’s urban sophistication as well as serving the needs of the new middle class. These needs were also met by the 14-hour work days of many shop assistants, a practice that continued until early closing legislation in 1900.

The 1920s saw increasing consumerism in Australia. In 1928 the Melbourne-based Myer’s bought James Marshall and Co., establishing the Myer Emporium. The personal relationship between storekeeper and consumer, however, was still close and many independent stores offered individual service. In 1933 John Martin’s first staged a Christmas Pageant to cheer up the Adelaide community during the Great Depression.

After World War II the importation of American-style ‘self-service’ and the rise of food ‘chains’ heralded the demise of many independently owned grocery stores. The 20,000 retail stores in South Australia in 1949 had declined to 14,000 by 1992. Ribbon or strip development emerged in the 1950s as one response to fewer retailers and customers’ increasing mobility. In the 1960s many evolved into shopping centres, tracing Adelaide’s urban growth through Salisbury, Elizabeth North and Morphett Vale and regional developments, as in Whyalla Norrie on the Eyre Peninsula. These centres were often built around Coles and Woolworths one-stop-shops, which within the decade became the final link in an integrated supply chain of goods. Coles ‘New World’ stores, with their rocket symbol, also epitomised the age of technology and modernity.

The fortunes of rural retailing followed the vicissitudes of the economy. After the first enthusiasm of settlement came the ebb. The pull of Adelaide, combined with droughts and depression, saw most retailers remain small local concerns, such as general stores, bakeries, machinery repair shops and later garages. Over time a few larger towns emerged, usually containing a quiet branch office of the Adelaide business and perhaps the regional distributor of agricultural machinery and stock feed. The accelerated decline in rural population after the 1970s further reduced the number and diversity of rural businesses and increased the focus on Adelaide.

The trend in the last decades of the twentieth century was towards larger retailing chains. In the 1980s Coles-Myer became the dominant retailer in Australia. David Jones bought John Martin’s, which it closed in 1998. Shopping centres also grew larger. At suburban Marion, the ‘shopping centre’ (1968) became the ‘shopping town’ (1995), covering hectares of space and providing retailing, entertainment and government services on a grand scale. The conversion of Rundle Street to a mall in 1976, despite opposition from local traders, aimed to achieve the same objective. Later projects, such as the Myer–Remm centre (1991) were less successful.

While retail ownership has become more integrated and concentrated, stores now offer a range and diversity of goods unimaginable to earlier generations. But some things do not change, even if hawkers of the twenty-first century use the internet rather than handbills to advertise their wares. 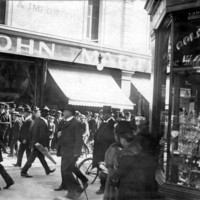 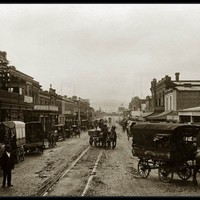 Image courtesy of the State Library of South Australia, SLSA: B 10279, Public Domain

Kingston, B, Basket, Bag and Trolley: A History of Shopping in Australia (Melbourne: Oxford University Press, 1994)