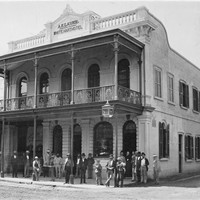 ‘Granting of Licences, regulating the sale of Wine, Beer, and Spirituous Liquors, for the Prevention of Drunkenness, and the Promotion of Good Order in Public Houses’ was passed in February 1837, the fourth law enacted in the new colony.
1908 - 1967

From 1908 until 1967 no woman was permitted to serve in a public bar unless she was directly related to the publican, although, barmaids already employed were allowed to continue working. Similarly, no woman could be served a drink at the bar.
1916 - 1967

Early closing, imposed between 1916 and 1967 and lasting longer than in any other state, was aptly called the ‘six o’clock swill’. Pubs, literally awash with beer as patrons in various stages of inebriation jostled to buy drinks before closing time, became ‘no place for a woman’.

JM Freeland characterises Australian pubs as among ‘the most socially significant, historically valuable, architecturally interesting and colourful features of Australian society’ (Freeland 1977, p. 1). South Australia’s pubs are no exception. Indeed, their vital role is reflected in the fact that a measure for the ‘Granting of Licences, regulating the sale of Wine, Beer, and Spirituous Liquors, for the Prevention of Drunkenness, and the Promotion of Good Order in Public Houses’ was passed in February 1837 as the fourth law enacted in the new colony.

About 1300 general hotel licences have been issued since 1837, and in 2001 there were about 655 hotels within the state; the number of pubs within the city of Adelaide fell from 128 in 1915 to some 60 in 2001. Four new city hotel licences were granted between1989 and 2001, the first city licences to be issued since the Old Lion Hotel in North Adelaide gained its licence in 1881.

While some early pubs were substantial structures with several public rooms, away from main city streets the pub could be a private home with one room set up as a bar and one for overnight guests. From the 1850s pub facades began to resemble shop fronts, but interiors changed little until the late 1860s when the Licensing Bench demanded minimal room sizes and numbers of rooms. Pub styles reached their zenith between the late 1870s and 1910, by which time most pre-1860 pubs had been rebuilt or new ones established. Usually Italianate, with shady balconies and verandahs with balustrades of ornate cast iron, these hotels have contributed significantly to Adelaide’s townscape.

Located on major transport routes, in new towns, at river crossings, major junctions, mining and railway towns, ports and seasides, pubs were often the first business in a new township and the last to close when a town was abandoned. They have provided venues for religious worship, theatrical entertainment, meetings small and large, public and private, balls, banquets, fetes and sporting events, and have been used as school classrooms, commercial rooms for travelling salesmen, electoral polling places and venues for inquests. As well as planned events by both publican and the community, pubs are renowned for unplanned interaction between regulars and strangers.

While barmaids already employed were allowed to continue working, from 1908 until 1967 no woman was permitted to serve in a public bar unless she was directly related to the publican. Unsurprisingly, the remaining few barmaids became tourist attractions until the last retired in 1936. Similarly, no woman could be served a drink at the bar. Early closing, imposed between 1916 and 1967 and lasting longer than in any other state, was aptly called the ‘six o’clock swill’. Pubs, literally awash with beer as patrons in various stages of inebriation jostled to buy drinks before closing time, became ‘no place for a woman’. Illegal after-hours trading and gambling spawned ‘nit keepers’, ‘nits’ and ‘cockatoos’ who warned of approaching police. Since the introduction of ten o’clock closing by Premier Don Dunstan on 27 September 1967, hotels have endeavoured to recapture their pre-1916 community status as places where all sexes can work and play together.

Some notable pubs in Adelaide

The Edinburgh Castle in Currie Street, Adelaide, retains the oldest licence (1837). The oldest intact hotel structure in the state is the former Beresford Arms in Gilles Street, built in 1839. The most revered hostelry was the South Australian Hotel on North Terrace that began as a licensed pub in March 1879. Its closure and demolition in 1971 were accompanied by storms of protest and much sadness. 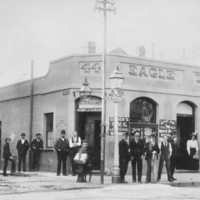 Image courtesy of the State Library of South Australia, SLSA: B 7093, public domain. 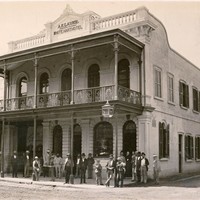 Image courtesy of the State Library of South Australia, SLSA: B 1071, public domain

Hi Barbara,
We don't have a lot on file here, but I believe the State Library of South Australia has quite a lot on the Mildred family - https://archival.collections.slsa.sa.gov.au/prg/PRG307_Mildredfamily_ser... and may also have sources on the Port Hotel - https://www.catalog.slsa.sa.gov.au/

Hello, I am looking for information about the history of the Port Hotel public and: George Mildred and Samuel East c1841-1842. And ownership of the Port Hotel: the Hon. Henry Richard Mildred who owned land around Nile Street and Mildred Street or Mildred Road.
Anyone knowing about George Mildred a shipwright who came out to SA on the Rapid with Colonel Light as part of the first surveying team along with his 13 year old nephew Hiram Mildred( son of Henry Mildred), thanking you, Anne Martin

Hi Catherine, the author of this article, Patricia Sumerling, is probably the best person to ask about hotel history. I can forward your query if you like, or you can contact her through the Professional Historians Association of South Australia - http://www.sahistorians.org.au/register/list/sumerling-patricia.shtml

Hi, Does anyone know anything about the Leys Hotel, Grote Street, Adelaide. I'm researching Scottish immigration and have diary evidence that immigrants stayed there upon arrival from Glasgow in 1878.

Hi Josie,
I'll pass on your query to a researcher to see if we can find more, but one place I would suggest checking is Trove - https://trove.nla.gov.au/ you may be able to find him in the local newspapers and narrow down the dates.

Hi, I am trying to verify if a Mr McKenzie was a leader of the Australian hotel in Goolwa and if so when.
Thanks josie

Thanks for sharing that Adam, the State Library is a great resource!
Britt

Theres a book at the state library that details opening dates, publicans ect. Its a red book. Go up to the first floor and ask at information. They'll be able to help.

I'm afraid I don't know the answer to that question Geoff but the author of this article, Patricia Sumerling, is contactable through the Professional Historians Association - http://www.sahistorians.org.au/register/list/sumerling-patricia.shtml

This is a bit of a long shot - but did the Mrs Alma (Kemp) Barber have anything to do with the Alma Hotel on Magill Road? I am trying to find out if the hotel was originally a boarding house (and therefore possibly owned by my ancestor Annie Gall).

Thanks for sharing that information Jane, it sounds like a fascinating family history.

My 3 times great grand father ran pubs/hotels around South Australia/ Adelaide his name is Richard Kemp with his Wife Sarah Doyle. One of their daughters also ran and was the founder of Junction Hotel Mrs Alma (nee Kemp) Barber. They originally came from Cornwall and were at Moonta, Kanmantoo etc. I look forward to hearing back from you.
Cheers
Jane Sullivan

Hi Trevor,
we can forward your comment to Patricia Sumerling, the author of this article, if you are happy for us to pass on details.

Are you still working on this project? My Grandfather Frank Leslie Moyle was the licencee during the 50's early 60's.

Thanks for sharing that Toby,
Quite a useful list. It may be that Jane's records are harder to track, we'll keep digging.

There is no mention of Jane Bird in the article.

Hi Judy, have you tried searching Trove? Often the licences were published in the paper when issued, which can help narrow down the rest of your search. https://trove.nla.gov.au/newspaper/search?adv=y

I am interested in the early First Commercial Inn at Port Adelaide, trying to work out who exactly ówned' it and who just said they did.

Names that intrigue me the most are: Charles Catchlove, when did he acquire it?
John T Haynes, did he actually buy it in 1841 and how much did he pay for it? or did he lease it?
Mary Ann Haynes, then Grey, widow of JTHaynes,: when did she own it ?
Did Jane Bird in London ever own it? if so, when?

simple questions with I imagine, complicated answers. If anyone has any info I would be really surprised and extremely happy.

Catherine...many thanks for this. Sorry for late reply. Marc

I would try State Records Glen, and if the paperwork hasn't ended up there then the archivists may know where else to try. https://www.archives.sa.gov.au/

I believe my ancestor acquired his first hotel licence in 1864 (Buckingham arms hotel) and I wonder if I can learn anything about him from the documents he would have completed. Where would I find these documents?

i would love the history of the christies beach hotel please

Hi Marc,
Apologies for the slow reply, I had to look this one up. Mrs Amy Teague, Regent St, Kensington is listed in the 1927 Sands & McDougall directory (I haven't searched to see all the other years she appears yet, but you can do that from the following link) - https://guides.slsa.sa.gov.au/c.php?g=410329&p=2794474

It looks like it may have been at 23 Regent Street, where the Kensington Hotel now is. There is mention of the Hotel changing names in the 'Kensington and Norwood Heritage Review 1995'. I'm sure with a bit of digging it would be possible to turn up more.

A cousin of mine Amy Teague (nee Dawson) and her husband Martin were the licencees of a pub in the 1920s/30s named THE GLOBE HOTEL in Kensington. Is there an address where it was located, is that building still standing ?

HI Ian, that's not one I know. If you click on Sources above then you can see where the information from this article was found. You might be able to track it down through one of those texts.

I have heard of an hotel, I think in the CBD, that ha a well inside the premises (maybe in the front bar). Can you help identify this pub please.

Hi Moira,
I'm afraid I don't know the answer to this question, but the author of this article, Patricia Sumerling, may know more. You can contact her through the Professional Historians Association - http://www.sahistorians.org.au/register/list/sumerling-patricia.shtml

Are you able to tell me which was the 1st pub in Adelaide to serve women?

Hi Marianne, we don't have a lot but I'll send you an e-mail. The State Library may have more in their collection: http://www.slsa.sa.gov.au/

I am currently writing/compiling the history of the Meningie Hotel which opened its doors on 16 April 1867, 150 years ago - any photographs or information would be appreciated. Marianne Cunneen, Meningie

Sumerling, P, Down at the Local: A History of the Hotels of Kensington, Norwood and Kent Town (Kent Town, SA: Wakefield Press, 1998)