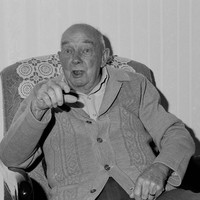 The term oral history was first used to describe the recorded memoirs of ‘significant’ Americans made by Columbia University historian Allan Nevins.
1973

Ray Broomhill and Margaret Allen led the way in oral history, tape-recording interviews for their respective theses about unemployed workers in Adelaide during the Great Depression and the transition of Salisbury from country town to suburb in the aftermath of the Second World War.
1975

Susan Marsden records interviews as a component of local history

Susan Marsden, a University of Adelaide history graduate, was the first to record interviews as a substantial component of local history research for her commissioned book, "A History of Woodville".
1978

Paul Thompson's "The voice of the past" is published

The social benefits that can flow from oral history are explained in British historian Paul Thompson’s influential "The voice of the past".
1979 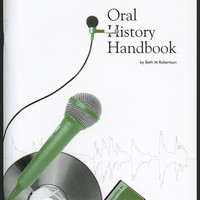 The library’s digital audio archiving system is based around Cube-Tec International’s AudioCube and Quadriga programs, as are those of Australia’s national collecting institutions.

Oral history is as old as humanity but today it is associated with recording interviews with people about their memories for historical research.

The term oral history was first used to describe the recorded memoirs of ‘significant’ Americans made by Columbia University historian Allan Nevins in the 1940s. Nevins was concerned that ‘the hurry and complexity of modern … life slice away the time that men need for methodical, reflective writing’ (Nevins, p30).

Oral history is still used to gain insights from influential people, such as politicians, business and community leaders, writers and artists, about their motivation and achievements. When written records are available oral history is used to critically examine or fill the gaps in that evidence.

Oral history is also recognised as a means of learning about ordinary people, those who are less likely to leave written records of their activities. One of the most important uses of oral history is to record the perspectives of disadvantaged people who traditionally have been either ignored or misrepresented in conventional historical records. The social benefits that can flow from oral history are explained in British historian Paul Thompson’s influential The voice of the past, first published in 1978.

A new generation of postgraduate students at the University of Adelaide in the 1970s were excited by the same convergence of sociology and history that stimulated the emergence of oral history as a research technique in Britain.

Ray Broomhill and Margaret Allen led the way in 1973, tape-recording interviews for their respective theses about unemployed workers in Adelaide during the Great Depression and the transition of Salisbury from country town to suburb in the aftermath of the Second World War. Their work became the basis of the oral history movement in South Australia.

In 1975 Susan Marsden, another University of Adelaide history graduate, was the first to record interviews as a substantial component of local history research for her commissioned book, A History of Woodville. In 1977–78 she also pioneered the use of oral history as a community development tool, involving 40 young unemployed people as researchers and interviewers in the ‘Port History Project’.

These early proponents of oral history all acknowledged the encouragement of senior South Australian historian John Tregenza, who had experimented with oral history interviews in the early 1970s and was convinced of the value of the technique.

The earliest surviving South Australian sound recordings are of the Arrernte people, recorded on Edison Concert 5-inch wax cylinders by anthropologists Walter Baldwin Spencer and Francis Gillen at Stevenson Creek, north of Oodnadatta, on 22 March 1901. The original cylinders were divided between three organisations associated with the expedition: the Royal Geographical Society of Australasia, South Australian Branch; the Museum of Victoria; and the South Australian Board of Anthropological Research. After the expedition Spencer and Gillen also made copies on 3-inch wax cylinders, a set of which is held at the British Library Sound Archive.

Another surviving wax cylinder from this era is a farewell speech by Hallam Lord Tennyson, governor of South Australia from 1888 to 1902 and the second governor-general of Australia. Made for the board of the Public Library on the eve of Lord Tennyson’s return to England in January 1904, it is now held at State Records of South Australia.

The recording of Tennyson was intended to be one of a series of the dignitaries and politicians involved in the 1901 Federation of Australia. Adelaide archivist Brian Baldwin has documented the ambitious plan in an article ‘The Public Library of South Australia’s oral history project, 1903–1908’. However, only Tennyson both responded to the Board’s overtures and visited South Australia enabling a recording to occur.

The emergence of oral history as a research technique in the 1970s led quickly to the founding of the Oral History Association of Australia (OHAA) to bring together and support the growing number of practitioners. The South Australian Branch (SA Branch) was established on 5 February 1979. From the beginning, OHAA membership has been open to anyone interested in oral history. Postgraduate students, university academics and professional historians join with genealogists, community arts workers and representatives of diverse associations, businesses, communities and industries to practice and promote oral history.

The SA Branch’s inaugural president Susan Marsden set an ambitious agenda for the voluntary association. It included proposing the state’s first major government-funded oral history project and pressuring the government to accept ongoing responsibility for the development of oral history in the state through the State Library of South Australia (SLSA).

With persistent lobbying, both goals were realised, in the form of the state Jubilee 150 project ‘SA Speaks: An oral history of life in South Australia before 1930’, conducted between 1984 and 1986, and the establishment of the JD Somerville Oral History Collection in 1987 by the Libraries Board of South Australia.

Central repository at the State Library of South Australia

There has been an enthusiastic response from the wider community to SLSA’s role as the central repository for oral history recordings and transcripts in South Australia. SLSA’s Somerville Collection has received an average of 300 hours of recordings each year since 1987. Most practitioners make use of field recording equipment available for loan from the library. This service, and the SLSA partnership with the OHAA SA Branch in providing training through a regular program of workshops, helps to ensure that oral histories offered to SLSA meet its collection development criteria in terms of both content and technical quality.

SLSA is entrusted with recordings from many sensitive oral history programs, including Aboriginal histories and the experiences of refugees. Ensuring that the rights and conditions of interviewees, interviewers and funding bodies are correctly administered is an important role of central repositories – and increasingly significant in the digital era when immediate online access to information is the common expectation.

Many other oral histories relating to South Australia are held in national collecting institutions, including the National Library of Australia (NLA), the National Film & Sound Archive and the Australian War Memorial. For instance, the NLA holds the Hazel de Berg and Bringing Them Home oral history collections. De Berg recorded interviews with more than 1000 Australian poets, artists, writers, composers and others between 1957 and 1983. South Australian oral historians were part of the federally-funded Bringing Them Home project, 1998–2002, that recorded the experiences of people throughout Australia directly affected by Indigenous child separation.

Since 1999 SLSA has been funded by the NLA to commission several interviews each year for the NLA’s ongoing Eminent Australians oral history program. Experienced oral historians research and record substantial biographical interviews with influential South Australians. The recordings are held in both libraries’ collections.

The OHAA SA Branch first published the Oral history handbook in 1983. It has become the national standard. The first edition was an A5-size booklet of 32 pages compiled by the SA Branch committee. At $1 to members it was intended to provide a simple, affordable alternative to commercial publications such as Thompson’s The voice of the past. One thousand copies were sold in the first 18 months.

In 1996 Beth Robertson, president of the SA Branch and the SLSA’s inaugural Oral History Officer (1987–99), wrote the third edition as an 88-page A4 manual. In 2004 the fourth edition was translated and published in Chinese by the Five Senses Arts Management Association, Taiwan. Now in its fifth edition, the Oral history handbook includes information about digital recording standards and equipment. About 17 000 copies have been sold since 1983.

Numerous other South Australian publications demonstrate the way in which oral history has become a widely accepted method of historical research. Two generations of professional historians like Susan Marsden have convinced associations, businesses and government agencies of the value of including oral history programs in research towards commemorative publications. During the 1990s and early 2000s Catherine Murphy led projects throughout the state that resulted in interviewing programs and publications that are models for the use of oral history in community development.

In other forms of publication, History SA’s museums incorporate oral histories in most of their exhibitions, and oral histories have been incorporated in outdoor interactive soundscapes such as the Garden of Discovery in the Urrbrae House Precinct at the University of Adelaide’s Waite Campus. The SLSA frequently includes excerpts of oral histories in thematic websites such as ‘South Australians at War’. The OHAA SA Branch’s website features members’ interviews to mark the state’s 175th anniversary in 2011.

All of the analogue and early digital formats used to record oral history until the early 2000s are now obsolete technologies. Just like the wax cylinder recordings of the turn of the nineteenth century, the equipment and the recording media of ¼-inch open reel tape, standard cassette, MiniDisc and digital audio tape (DAT) are no longer in production, and spare parts are increasingly hard to obtain.

All of these formats are also subject to decay due to inherent chemical instabilities and being kept in less than ideal environmental conditions. The great majority of audiovisual formats require cooler, dryer conditions than paper-based collections need.

The world is running out of the equipment required to play back these obsolete formats so that they can be digitised with fidelity and survive into the future. The United States’ Library of Congress and the great audiovisual archives of Europe are working towards 2020 as the year by which both time and equipment might run out. They are amassing replay equipment and parts, well aware that the machine-hours left may fall short of the hours of audio needing transfer.

The SLSA’s audio preservation facilities made the transition from analogue to digital in 2004. The library’s digital audio archiving system is based around Cube-Tec International’s AudioCube and Quadriga programs, as are those of Australia’s national collecting institutions. At the same time, the library replaced its cassette and DAT loan equipment with digital compact flash card field recording units.

Oral history has always had a sense of urgency – the desire to record an individual’s memories before it is too late. Now there is the added urgency of preserving access to the first 50 years of oral history recordings while there is still time.

This is a revised and combined version of ‘Oral history’ and ‘ Sound recording’ first published in The Wakefield companion to South Australian history edited by Wilfrid Prest, Kerrie Round and Carol Fort (Adelaide: Wakefield Press, 2001). Revised by the author, uploaded 14 July 2015 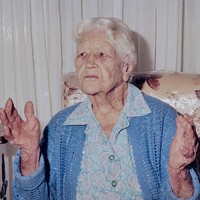 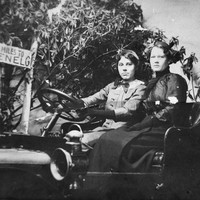 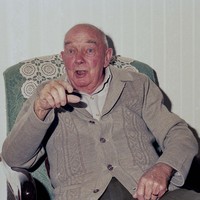 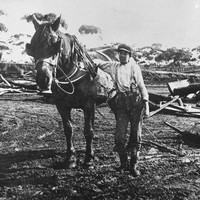 State Library of South Australia, OH_1_38_photo_A.jpg (Out of copyright) 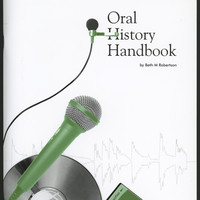 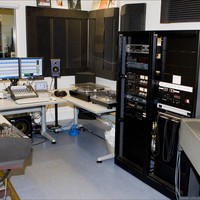 Thompson, Paul, The voice of the past: Oral history (Oxford: Oxford University Press, 1978)

Associated with:
State Library of South Australia
The University of Adelaide