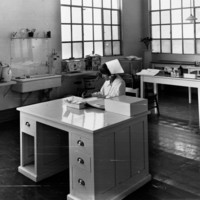 In July 1837 the Colonial Surgeon appointed a woman to care for three helpless and indigent men in a makeshift infirmary in Adelaide. Receiving little support for her work, she resigned after six months. Nursing appointments continued on a temporary basis until January 1841 when the first hospital (later the Royal Adelaide Hospital [RAH]) opened. By the end of the decade there was also a lunatic asylum and destitute asylum. All were staffed by male attendants and a few female nurses.

Midwives who based their practice on their own experience attended women in childbirth in their own homes. A midwife also attended mothers in the lying-in ward at the Destitute Asylum. In 1902 the new Queen’s Home in Rose Park provided maternity care for married women from low income families.

The Children’s Hospital, which opened in North Adelaide in 1879, offered the first formal training for nurses in a one-year course. Nurses received a small wage and accommodation and a hospital certificate on completion. Over the next 40 years many public and private hospitals offered similar on-the-job training with a few lectures. In 1892 the period of training was extended to three years.

The nursing staff, except those at the lunatic asylum, were now all female. From 1963 male nurses undertook general nursing training, but nursing remains highly gender-segregated and an estimated 92% of nurses are female. For many years nurses came predominantly from a white middle-class background but this composition has gradually changed to reflect a broader class and multicultural mix. Some of the first to herald this change were a few young Aboriginal women who, after protest by their white supporters, were accepted for training at the RAH in the early 1950s.

Branches of two professional associations for nurses – the Royal British Nurses Association (RBNA) and the Australasian Trained Nurses Association (now the Australian Nursing Federation [ANF]) – were formed early in the twentieth century. The RBNA, which ceased to function in the 1960s, also acted as an agency for a private nursing service. Both associations set standards for nursing practice and maintained registers of trained nurse members before the Nurses Registration Act was passed in 1920. Until the 1970s the ANF was inactive in industrial affairs, and despite their service during several wars nurses’ pay and conditions remained poor. The ANF has become increasingly effective as a union over the last 30 years.

Advances in technology, the extension of scientific knowledge, and changes in societal attitudes and expectations have prompted changes in nursing education. From 1950 a few South Australian nurses were prepared for roles in education and administration at the College of Nursing in Melbourne. The first one-year course for enrolled nurses, to assist registered nurses in hospital nursing, began in 1961. These have recently been moved into the technical and further education sector. In the 1970s South Australian nurses contributed to national discussions leading to the federal government’s decision to transfer all basic general nursing education from hospitals to the higher education sector. Undergraduate diploma courses in nursing began at Sturt College (1975) and the South Australian College of Advanced Education (1983). Later these became bachelor degree courses. Hospital training for nurses was phased out by 1993. 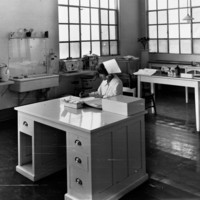 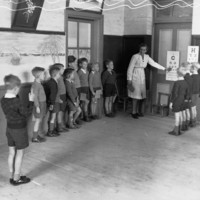 A nurse conducts an eye test for students at Thebarton Primary School, c. 1945 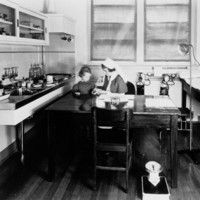 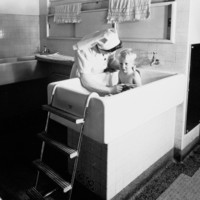 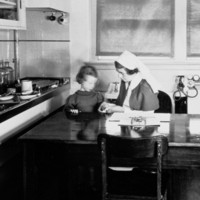 Good Morning, I am wanting to find if there are any records around 1989/90 for a Graham Sutherland who I am told was an enrolled nurse. There may be different spelling there. I am trying to track this person down as he is my absent father whom I have never met. If there is any information you can provide about his work in SA Health I would be so incredibly greatful too hear. Kind Regards, Ben

Summers, A, ‘‘For I have ever so much more faith in her ability as a nurse’: The eclipse of the community midwife in South Australia, 1836–1942’ (PhD thesis, Flinders University, 1995)