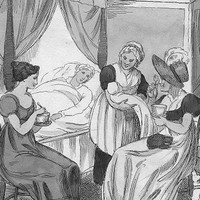 When men and women married in the 1830s they generally assumed that children would follow promptly and regularly. The prevailing sense was that children just ‘came’ and that there was little to be done about it. Women were encouraged to see motherhood as both destiny and duty, and letters and diaries from the time suggest that many tried earnestly to do so. Families were large, with an average of six to eight children, but averages can be misleading. Families with many more children were common. The main determinants of family size at this time were age at marriage and age at menopause. Women who married in their early to mid-twenties in other words, could expect to bear children continuously into their early to middle forties, and while the intervals between children varied between women, most could expect to have a new baby every two to three years throughout these years. The first child commonly arrived within one, or at most two years of marriage.

In the 1830s childbirth was both painful and dangerous. The only pain relief available was opium, usually sold as a sleeping draught known as laudanum, but this was almost never used. It was widely believed that women were destined to suffer during childbirth, as the Bible had decreed. Almost all babies were born at home, usually with the assistance of family and friends. There were also women who practised as midwives, although there was no formal training, and most midwives were experienced women who had borne several children themselves. Doctors were generally only called when births were prolonged and it was feared that the mother might die, but their intervention brought grave risks. There were instruments for use in childbirth, but no anaesthetics or understanding of antisepsis, which meant that the danger of infection from medical intervention was very high. Training in obstetrics was rudimentary at best and was not compulsory for doctors until much later. In fact doctors were often the unwitting sources of infection for women in childbed, transmitting contagion from previous patients. Hospitals were places of last resort, sought only by the very poor and the desperate. The death rates in hospitals were known to be extremely high.

The main dangers for women in childbirth were prolonged birth, excessive bleeding and infection. Prolonged births often followed when labour began with infants in the breech (feet first), or far worse, transverse (sideways) position. Desperate and agonising attempts would be made to ‘turn’ these babies, rarely successfully. Another common problem at this time was a narrow or deformed pelvis, caused by childhood rickets – a disease especially prevalent in poorer women and resulting from inadequate diet and exposure to sunlight (vitamin D deficiency). In extreme cases, where it became clear after two or more days in labour that a child could not be born, a doctor might attempt to use instruments, either to pull the child free, or to crush the child and remove it. Often the baby was already dead at this stage and there was a strong chance that the mother would also die, either from shock or from infection. These were decisions made in desperate circumstances, when there was no other hope, and the success rate was low. Excessive bleeding was another common problem and is still a risk in childbirth, but modern obstetrics has recourse to drugs which help to control it. In the nineteenth century there was almost nothing a midwife or doctor could do to stop a post-birth haemorrhage and many women literally bled to death.

Infection was the other great scourge of childbirth. Women are very susceptible to infection during and immediately after the process of childbirth, and puerperal or childbed fever was both common and much-feared in the nineteenth century. Even an otherwise trouble-free delivery was no guarantee of a safe recovery from childbirth, but prolonged birth, retention of the placenta (or part of it), or any form of surgical intervention, increased the risk significantly. Childbed fever generally set in two or three days after birth, but once established had an almost inevitable outcome. The actual cause of death was blood poisoning or septicaemia, generally between a week and ten days after delivery. Maternal mortality rates remained high in Australia until the twentieth century.

Women in particular, but also their men, approached each birth with trepidation. Many women routinely prepared themselves for death and the terms they used to describe their approaching ‘lying-in’ reflected this. Childbirth was often described as a woman’s ’time of trial’. One ship’s captain, travelling to South Australia in 1836 and leaving his very pregnant wife behind in Britain, referred in his diary to his wife’s ‘trying hour’, or on one occasion, to her ‘trying hour of naturs sorrow [sic]‘. Children were often sent to stay with friends or family as a birth approached, so that they would be spared the sound of their mother crying out in pain. Sometimes they would be unaware that another baby was even expected until they returned home again. The Church of England provided a special rite of thanksgiving for women who survived childbirth, rather quaintly entitled The Thanksgiving of Women after Childbirth, commonly called the Churching of Women. There was also a persistence of the belief that women were ‘unclean’ after childbirth, a continuation of the older bar on menstruating women receiving the sacrament, and it was common to return to the communion rail only after post-childbirth bleeding ended and after the woman had been ‘churched’.

The use of pain relief in childbirth increased only gradually towards the end of the century. Queen Victoria famously pioneered the use of chloroform for her eighth confinement in 1854 and this helped to popularise the practice, but many doctors still opposed its use.  Similarly, better understanding of infection and the gradual acceptance of principles of antisepsis in surgery and childbirth from the middle decades of the century, helped to reduce infection rates. Towards the end of the century there was a growing sense that many women’s lives might be saved if women could be delivered under medical supervision in hospitals. The first private maternity hospital, the Queen’s Home, opened in 1902 in Rose Park. Until this point the only other maternity hospital was the Lying-in Hospital contained within the Destitute Asylum on Kintore Avenue. This was available only to impoverished women or single mothers with no other recourse. The Queen’s Home was renamed the Queen Victoria Hospital in 1939 and was declared a public hospital in 1946. By then it was more common for babies to be born in hospitals than at home.

However the greatest change in the childbearing lives of South Australian women was a significant reduction in the number of births per woman, evident from the mid-late 1870s. What is known as the ‘fertility transition’– a transition from high levels of natural fertility, to low levels of ‘controlled’ fertility- was well underway in South Australia from the 1880s. This was a phenomenon that spread throughout the western world from the later decades of the nineteenth century, but it is evident that South Australian women were amongst the earliest participants in the fertility transition. In the absence of any significant advance in the technology of birth control at this time, historians now suggest that this phenomenon represented generalised cultural change: couples increasingly saw smaller families as the desired norm and modified their sexual practices accordingly. Women’s increasing emancipation in these decades is argued to be an important contributing factor in what is often called the ‘quiet revolution’. There were still many families that were large by modern standards, but these began to be seen as anachronistic. By 1900 the ‘average’ married woman could expect to bear four children– about half the number her mother and grandmother might have anticipated – and the numbers continued to fall in the first few decades of the twentieth century 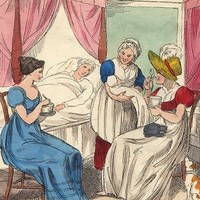 The diary cited was kept by Robert Morgan, Captain of the Duke of York, which was the first vessel to arrive at Kangaroo Island carrying official settlers in July 1836. For these and other extracts see Bound for South Australia Saturday 19 March 1836 and others.