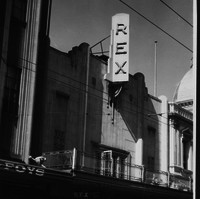 Opening of the Arcadia Picture Palace

The first theatre on this site, the short-lived Arcadia Picture Palace, was opened.
1912

Opening of the Pavilion Theatre

After the closure of the Arcadia, the theatre was reopened as the Pavilion 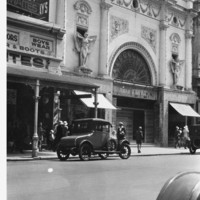 Facade of the Pavilion Theatre
1929

Closure of the Pavilion

After the Pavilion closed, the site was used as a mini-golf course. 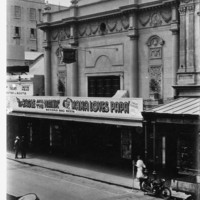 Opening of the Rex Theatre

Grand opening of the Rex Theatre, attended by the Lord Mayor Glover 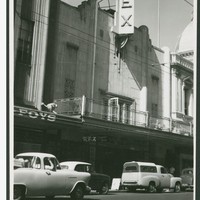 Redevelopment of the Façade

The façade of the building was modernised into an Art Deco style that was popular at the time, and the interior upgraded 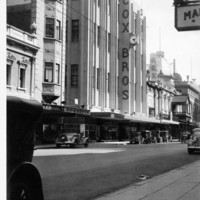 Purchase of the Rex Theatre by Cox-Foys

The adjoining department store, Cox-Foys, purchased the Rex Theatre for more than £100,000
1959

Initial Closure of the Rex Theatre

Demolition of the Building

Built in 1933 in a prominent position on Rundle Street and demolished in 1961, the Rex Theatre inherited the role of the Pavilion Theatre, which had been among the most popular cinemas in Adelaide during its operation from 1912 to 1929. The Rex, especially after its 1940 redesign involving a striking Art Deco facade, was a very successful institution of Adelaide's shopping heart. However, due to the expansion of an adjacent department store, the Rex was demolished in 1961.

The Rex Theatre was the third theatre to operate at its address in Rundle Street. The first was the short-lived Arcadia Picture Palace, whose operators renovated the existing shoe store into a theatre. While deliberately evoking the majesty of grand American ‘picture palaces’ with its name, this original building was hardly on a comparable scale. Opening on July 2, 1910, it closed its doors less than a year later on February 11, 1911. On June 22, 1912, the building was redesigned and reopened as the Pavilion Theatre, which turned out to be rather more successful. The sign over the entrance announced the cinema’s name as the ‘Pav', which became its most common public moniker. Even after its eventual relaunching as the Rex Theatre, the name ‘Pavilion-Rex’ was still sometimes used. Unlike other theatres of its time, the Pav operated on a ‘continuous’ system of film display, running non-stop from 11am to 11pm. For the price of three pence for a seat in the stalls, or six pence for a seat in the circle, a movie-goer could spend as long as they wished.

An unusual attraction of the Pav which made it among the most popular cinemas in Adelaide was its child-minding service. This scheme was considered highly unusual at the time, but seems to have been very popular amongst women who wished to shop along Rundle Street. ‘Special lady attendants’ were on hand to look after these children, with those old enough to watch the films seated in the dress circle. The attendance figures for the first year of operation were very impressive: around 500,000 tickets sold, while the population of South Australia was only around 400,000. The Pav continued its run as a theatre until 1929, when it closed and the facilities were repurposed for use as a mini-golf course. This turned out to be a relatively short interlude in the history of the building, as it was reopened once again as a theatre on 31 March 1933, rebranded as the Rex Theatre.

Opening of the Rex

The opening ceremony for the Rex Theatre was a well-publicised and celebrated affair, attended by the Lord Mayor of Adelaide Charles Glover. Newspaper articles advertising the imminent opening hailed its technological marvels, especially its novel projection method utilising the ‘rear projection principle’.  This involved locating the projection equipment behind the screen, rather than at the back of the stage, as was the norm. Also promoted was the fact that its system of advanced lighting would be ‘new to Adelaide’, using a trough system in the ceiling to diffuse light through ‘modern silhouette patterns’. Opening day involved a double billing of the ‘delightful comedy’ Evenings for Sale starring Herbert Marshall, and musical-comedy The Big Broadcast, which starred various American radio stars, most prominently Bing Crosby.

Business was successful enough at the Rex Theatre that by early 1940, extensive redevelopment of the site was undertaken. £6000 was spent on both practical and artistic aspects of the theatre; seating was expanded to increase leg-room and bathroom facilities were improved, while the ‘Edwardian façade of classical elements’ built in 1912 for the Pavilion Theatre was redone in a new and modern Art Deco style, which was very popular at the time. One unusual feature of this theatre was the ability to open up the roof on hot nights to allow a refreshing breeze to cool the audience. These renovations were completed by March 1940, and allowed a maximum occupancy of 1200 attendees.

The trajectory of the theatre changed dramatically on 11 October 1954, when it was announced that the owners of the adjacent department store had purchased all of the Rex Theatre’s stock. The Cox brothers, owners of the Cox-Foy department store, sought an expansion of their building onto the site of the Rex Theatre. There was no immediate change in the operation of the theatre, as the Rex’s lease continued through until March 1956. An intention to demolish once legally permissible, however, was clearly stated by the Coxes from the point of stock purchase.

Yet, the Cox brothers were still not yet willing to undertake the expansion, and so the theatre’s lease was extended. On 12 February 1959, however, the Rex Theatre shut down, with a final showing of Curly Top, starring Shirley Temple. Yet, even then, Cox-Foys declined to immediately expand its department store, and so a new lease was offered to the operators of the Majestic Theatre. The Majestic was a cinema located on the corner of King William Street and Pirie Street, and was itself demolished in 1980. These new operators evidently held optimistic hopes for their new lease, as the Rex had a grand reopening, led by Premier Sir Thomas Playford, on 15 May 1959, barely three months after closing. Their optimism for the Rex was shown even more strongly by the fact that it was newly fitted with the cutting-edge technology of Cinemascope, a new format of widescreen film favoured by big-budget Hollywood productions.

While the numbers of attendees were apparently strong, by 1961 the owners of Cox-Foys were finally in a position to make the expansion they had been planning since 1954. On 29 July 1961, the Rex Theatre closed with a final showing of Black Orpheus (Orfeu Negro), a French-Brazilian adaptation of the myth of Orpheus set in a favela of Rio de Janeiro. While this may seem an odd choice for a final film of a popular Adelaide cinema, Black Orpheus was famous in its time, having won many prestigious international awards. Such an artistically-meritorious film could have been considered to represent closing on a high note for the Rex Theatre.

Shortly after closing, the contents of the Rex Theatre were auctioned off, and the building demolished. Cox-Foy’s department store expanded to the edge of Adelaide Arcade, where it continued to operate until its closure in 1977. 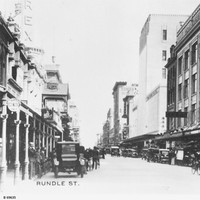 Rundle Street circa 1930, featuring the Rex Theatre on the left

Image courtesy of the State Library of South Australia, SLSA: B 69635, Public Domain 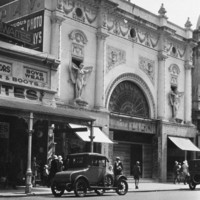 Facade of the Pavilion Theatre before renovation involved in the opening of the Rex, 1932

Image courtesy of the State Library of South Australia, SLSA: B6199, Public Domain 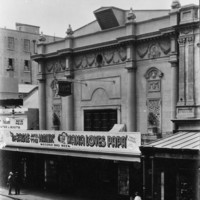 Image courtesy of the State Library of South Australia, SLSA: B 6392, Public Domain 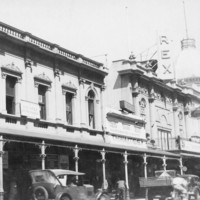 Rundle Street before the construction of the Cox Bros store

Image courtesy of the State Library of South Australia, SLSA B6925, Public Domain 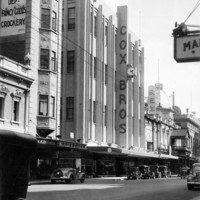 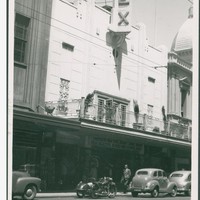 The Rex Theatre after its Art Deco redesign, 1959

Image courtesy of the State Library of South Australia, SLSA: B 12366, Public Domain