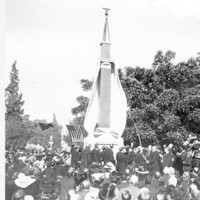 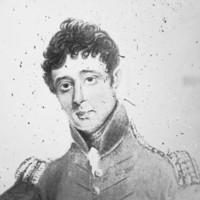 Colonel William Light was buried in the Square in 1839, following his wishes to be buried in the square which bore his name. A monument was later erected over his grave in 1843.
1905

The deteriorating original sandstone monument was replaced with a new one, unveiled on 21 June 1905. 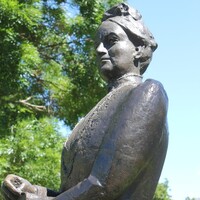 The statue, designed by Ieva Pocius, was erected in the south west corner of the Square as part of the celebrations for the 150th anniversary of European settlement in South Australia in 1986. 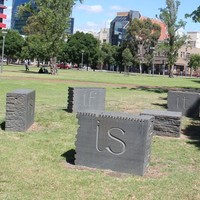 The sculpture was relocated to Light Square in 2003

Located in Adelaide on the Kaurna peoples land of Tandayangga (place of the Red Kangaroo Dreaming), Light Square was one of the six squares designed by Colonel William Light in his 1837 plan of Adelaide. Originally intended as a recreational garden oasis from the surrounding city, the Square, however, developed a reputation for prostitution, drinking and violence.

Planning and development of the Square

Colonel William Light, the appointed Surveyor-General of South Australia, and his team chose the location and planned Adelaide. Light's plan set out the City on a grid pattern that included six squares and a surrounding parklands that would act as a 'belt of greenery' around Adelaide.

Early in the nineteenth century the squares were largely left as they were before colonisation. Light Square, however, would soon become unique among the squares by becoming the burial place of Colonel William Light in 1839, with a monument later being erected over his grave in 1843. As the nineteenth century progressed the city squares would become more ordered and developed. Light Square was by 1880 surrounded by an iron palisade fence with six gates. Each of these gates opened onto paths laid throughout the Square that were lit at night by lampposts.

In the early twentieth century further changes were made that would alter the shape of the original Square. Tram tracks were laid in 1908, followed shortly after by the extension of Currie Street through the Square in 1910. Redevelopments also took place in the 1920s that involved the redesign of paths, the removal of the cast iron palisade fence, new kerbing and the extensive removal of trees that were either dying or deemed unfit. These changes modernised Light Square, while also opening up the landscape by the removal of trees. The Gardenesque style of planting was still maintained, however, by retaining a variety of tree species including: pepper trees, olive trees, Moreton Bay figs, southern nettle trees and river sheoak trees.

After Colonel William Light died in 1839 it was decided to honour his memory by giving him South Australia's first state funeral and by fulfilling his wish of being buried in the square that bore his name. In total £641 was raised by private subscription to erect an elaborate sandstone Gothic cross, designed by George Kingston, over his grave. The finished cross was erected in 1843 with an inscription later added in 1876, reading:

Erected by the pioneers of South Australia

The Site of Adelaide was fixed

However, by 1892 this monument had become badly weathered, leading Mayor Bullock to form a committee dedicated to erecting 'a substantial monument' to honour Colonel Light. Although this committee came to nothing after the government withdrew financial support for the monument, a new committee was established in 1904. They decided to not only replace the monument in Light Square, but to also erect a separate statue in Victoria Square (later moved to Montefiore Hill in 1938). The new monument, which still stands today, consisted of a theodolite placed on a tall column. It was unveiled on the 21 June 1905 to a large crowd that included 'old colonists', who had witnessed Light's funeral 66 years previously, seated on either side of the monument. Sir Samuel Way addressed the crowd, reinforcing Light's legend by recalling the achievements and adventures of the founder of Adelaide. The Mayor of Adelaide, Mr Theodore Bruce, then proceeded with the unveiling of the monument.

Light Square was located in the working class west end of Adelaide, an area of affordable housing, workshops, factories and warehouses. Originally it was largely a residential area, consisting of small, hurredly constructed houses built due to increasing demand from new arrivals to the Colony. As this demand increased, land lots were subdivided further, becoming smaller and more affordable in the 1840s. These dwellings attracted people from the working classes, unemployed, transients, prostitutes and other ‘undesirable’ elements to the Light Square area. By the 1880s the living conditions in the neighbourhood would worsen, factories, workshops and warehouses began to encroach on residential areas, combining with population influxes between 1870 and 1890 and poor infrastructure, to turn the west end of Adelaide in the nineteenth century into an overcrowded, noisy, smelly neighbourhood with inadequate housing, poor roads, no footpaths, inadequate sewage and an unsafe water supply.

The type of neighbourhood around Light Square and the bordering Shamrock Hotel (now Colonel Light Hotel), which faced the Square, soon caused it to gain an infamous reputation among respectable society in Adelaide. This began to appear in newspaper reports from 1850 with The Adelaide Observer on 9 of February 1850 saying of Light Square:

A number of pestiferous dens exist in Light Square and its neighbourhood, which may be considered the moral cesspools of the city of Adelaide...Squalid filth and fetid vice render the atmosphere rank with unwholesome weeds.

This reputation was fuelled by prostitution and the drinking habits of the people who frequented the many pubs in the west end of Adelaide, such as the Shamrock Hotel which was notorious for violence, prostitution and drinking, people who frequented it were labelled as 'all the very worst of classes of the city, thieves, prostitutes of the lowest description, and perhaps worse characters. Hardly a night passes without some scene of brutal violence occurring' (The South Australian Register 8 March 1883, p4). Another article in The South Australian Register titled ‘lower Adelaide’ described a visit to the notorious Hotel:

I next entered what is universally acknowledged to be one of the lowest amongst the low public houses in the city - the notorious Shamrock. We pushed our way with difficulty through the bar amid a scene that suggested pandemonium. Men and women sunk to the level of brutes – or rather beneath that level, for no members of the animal kingdom could look so utterly debased – were jostling, crowding, shouting, and drinking in every stage of intoxication...Those assembled seemed to be almost without exception Port larrikins of the worst type, loafers, prostitutes and other well known Police court habitués...a little army of policemen outside were the only persons having a resemblance of respectability insight. (The South Australian Register, 1 October 1877, p 5)

However for the working classes, these pubs were an escape from the hardships of everyday life. The centre of life for many people, they were places where people could meet friends, where business could be managed and jobs negotiated. Games were also played, including billiards, skittles and cards along with illegal gambling and betting. Entertainment was also offered. The Shamrock Hotel, for example, held free concerts, including strong man acts and acrobats, almost every night. In the twentieth century restrictions on drinking, such as the barring of bar maids in 1908 and six o'clock closing in 1916, dampened pub life, causing many of the 'low public houses' to close.

Indigenous people who remained in Adelaide also lived in the affordable housing close to Light Square. The Indigenous community in the City would increase in the early twentieth century due to changes in community attitudes and a policy of assimilation, causing an increase in the number of Indigenous peoples migrating or returning to the City from missions, such as those at Point Pearce and Point McLeay. Adelaide attracted different groups searching for better opportunities of employment, education and housing. These groups included the Kaurna people and the neighbouring Narungga and Ngarrindjeri peoples. Although unable to assimilate into the social life of the City's pubs and clubs, Indigenous peoples created their own social life and places, among them Light Square which served as a community meeting place, where people could talk, disputes could be resolved and where rallies and protests could be formed. Located near cheap housing and the parklands, where many Indigenous people lived or camped, the Square would become a recreational space where people and families could meet, talk and socialise. It would be the main meeting area for Indigenous peoples from 1900 until the 1960s when Victoria Square became more prominent.

In recent years Light Square has seen a number of changes and additions. The mid 1980s saw renovations to the landscape, including the replacement of old trees with new ones and the reorganisation of the Square’s pathways. A bronze plaque, unveiled on 19 October 1986, now sits in Light Square acknowledging this redesign. As well as these renovations, a statue of Catherine Helen Spence was erected in the south west corner of the Square as part of the celebrations for the 150th anniversary of European settlement in South Australia in 1986. This life-size bronze statue was designed by Ieva Pocius, who was selected from the seven sculptors who submitted designs. The statue depicts Spence with a determined expression holding an open book on top of a three-tiered triangular pedestal. The inscription reads ‘Catherine Helen Spence 1825-1910 social and political reformer, writer and preacher who worked for children’ and was unveiled by Queen Elizabeth II on 10 March 1986.

Joining the statue of Spence and monument to Colonel William Light in Light Square would be ‘The Eternal Question’ sculpture in 2003. Originally designed by Richard Tipping for the Adelaide Festival of Arts in 1982, the sculpture’s black granite blocks were set to become a breakwater when they were saved by Ron Radford, the director of the Art Gallery of South Australia, in 1983. They were eventually loaned to the Adelaide City Council and relocated to Light Square in 2003.

In March 2012 Light Square was given the name Wauwe as part of the Kaurna Naming Project. Wauwe, meaning female grey kangaroo, was named after the wife of Kadlitpinna, or 'Captain Jack', one of the three Kaurna Burka's, or elders, at the time of colonisation. In February 2013 the spelling was revised to Wauwi. 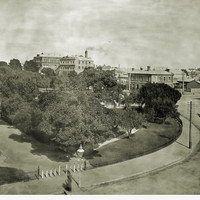 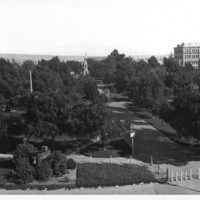 Image courtesy of the State Library of South Australia, SLSA: B 68808, public domain 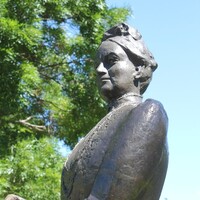 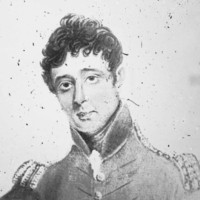 Self-portrait of Colonel William Light. This is a photograph of a lithograph of the original painting, which is dated c. 1815 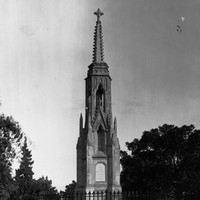 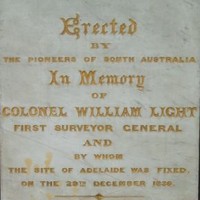 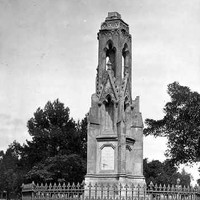 The first memorial to Colonel Light seen here without its spire; a new memorial was erected in 1905 ca.1904 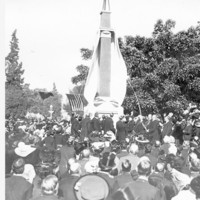 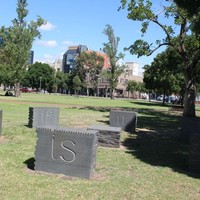 Amery, R and G Y Williams, ‘Reclaiming through renaming: The reinstatement of Kaurna Toponyms in Adelaide and the Adelaide Plains’. In L Hercus, F Hodges and J Simpson, (eds) The Land is a Map: placenames of Indigenous origin in Australia, pp 255-276 (Canberra: Pandanus Books in association with Pacific Linguistics, 2002)

Hammond, L, ‘Making Place: Maps and Memories in the Creation of the West End of Adelaide’ (Unpublished Doctor of Philosophy thesis, School of Communication, Information and New Media, Division of Education, Arts and Social Sciences, University of South Australia, Adelaide, 2007)