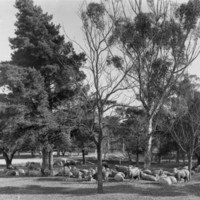 Used as a dumping ground

A track for horse racing was established in park 16 sometime during the 1850s. It became the home course for the South Australian Jockey club until 2008.
1856

Governor MacDonnell provided funds to encourage tree planting in 1855 and some 11,000 seedlings were planted throughout the Adelaide Parklands over the following year.
1881

Implementation of beautification plans devised in 1880 by Conservator of Forests John Ednie Brown.
1925

A playground was created in Park 15 after many years of campaigning by women's groups.
1960

Used by the Pitjanjatjara and Yankunytjatjara as a camping and meeting ground during negotiations over land rights, which resulted in the Pitjantjatjara Land Rights Act 1981.
2008

An irrigation system was installed throughout the Adelaide Parklands, using Recycled water from the Glenelg Wastewater Treatment Plant.

In his 1837 Plan of Adelaide Surveyor-General Colonel William Light created a grid pattern of streets, bounded by terraces to the north, south, east and west and surrounded by parklands. This was a visionary plan for a city and reflected up-to-date views on the importance of fresh air and open space in urban areas. It is thought to be a unique design feature, recognised in 2008 by the inclusion of the Adelaide Parklands on the National Heritage List. In all the parklands comprised some 931ha (2300 acres) in 1837, although subsequent building reduced them to about 689ha (1702 acres).

Light was excited by the possibilities of the wide plain that stretched between the coast and the Mt Lofty Ranges and determined on this site for Adelaide in December 1836, despite its distance from the coast. The land Light saw in 1836 already resembled an 'English park' - a point which struck many early European settlers. Native grasses grew tall and thick, reaching to the horses' manes in parts, while tall Eucalpyts dotted the landscape and fringed the River Torrens. Elsewhere grew Acacia (wattle), Sheoak and many flowering plants. Native birds and animals were in abundance.  Animals included kangaroos, wallabies, possums, bilbies, native rats and many varieties of lizards and snakes - some 40 different species of mammals and 56 species of reptiles in all. Among the estimated 285 species of birds were parrots, lorikeets, magpies, kookaburras, black swans, several native duck species and many others. Birds survived the advent of Europeans better than mammals. It is thought that some 20 of the original 40 mammal species are now extinct, while about 7% of native birds are lost. The reptiles survived best of all.

Both plants and animals were important sources of food for the Kaurna people, whose lands included the site of Adelaide.  They camped regularly along the banks of the Torrens, hunting, fishing and digging for the tubers and roots that were an important part of their diet. One important food was the yam daisy, which persisted on the parklands until the 1850s and 1860s, when sheep grazing took its toll. After European settlement the creek that runs through Katlitpina/Rundle Park was still associated with Kaurna use, though the pressure of arrivals soon depleted native food stocks. Kaurna who remained in the Adelaide area quickly became dependent on government rations. Few of these early Kaurna are now known to us by name, but there was one Ngarrindjeri man associated with the East Parklands who was very well known in his time.  Poltpalingada Booboorowie (also known as Tommy Walker) camped in the parklands from the 1880s. He became a leader of the Aboriginal community then living on the fringes of Adelaide and was widely respected. When he died in 1901 members of the Stock Exchange of Adelaide paid for a headstone for his grave in the West Terrace Cemetery.  But there was a sinister side to the story, for it was revealed later that the state coroner, William Ramsay Smith, had removed Tommy Walker's body before burial and sent his skeleton to the Unviersity of Edinburgh for forensic study. He placed sand in the coffin to conceal the theft. There was a wide trade in Aboriginal skeletal remains at this time. In the early 1990s the university repatriated Walker's remains and he was buried at Raukkan Aboriginal Community.

Nearly 80 years after Tommy Walker's death the East Parklands was associated with another significant event in the Aboriginal history of South Australia. The section named Pakapakanthi/Victoria Park (Park 16) was used by the Pitjanjatjara and Yankunytjatjara as a camping and meeting ground during negotiations over land rights in 1980. Elders and others were concerned by a government decision to open their country to mineral exploration and sought community support for their campaign. Their actions resulted in the Pitjantjatjara Land Rights Act 1981 and the first grant of freehold title to an Aboriginal community in South Australia.

The landscape Light and the early Europeans encountered was far from a 'wilderness', although that was the way they saw it. In fact, the Kaurna had managed their lands carefully for generations.  They were especially skilled in the strategic use of fire to maintain open stretches of country for hunting and to control the thick undergrowth that might otherwise fuel wildfires. The new arrivals commented on this use of fire but they did not understand its importance in land management. Nor did they understand the need to tread lightly on the land, conserving food and plant resources. Within a decade they had denuded the parklands of trees, cut down for firewood, while livestock grazed the grass bare. The earliest photographs of Adelaide show the city surrounded by desolate paddocks, subject to ferocious duststorms in summer and muddy quagmires in winter. The parklands at this point were far from the landscaped 'green belt' we now admire.

Contrary to Light's concept of a healthy green belt, colonists used much of the parklands as an extended rubbish dump. There was a large dump in Park 13 in the East Parklands throughout the 1850s and possibly longer, and this, combined with the tannery on East Terrace, made the area decidedly unsavoury. This was in stark contrast to the area further south. The large mansions that fringed East Terrace towards the southern end had no rubbish dumps to trouble them. Instead they looked out on Victoria Park Racecourse, created in the 1850s. From 1871 the racecourse and park was managed by the Adelaide Racing Club. A fine, tree-lined carriageway was constructed in the 1880s, connecting East Terrace directly with the racecourse.

Attempts to rehabilitate the parklands were made from the mid 1850s. Dismayed by the 'unsightly' parklands, newly arrived Governor MacDonnell provided funds to encourage tree planting in 1855 and some 11 000 seedlings were planted over the following year. Slowly the parklands began to improve. Especially significant were the beautification plans Conservator of Forests John Ednie Brown devised in 1880.  These included the creation of recreation grounds and the Torrens Lake (1881), although separate areas were still fenced at this stage to contain many thousands of grazing stock, making access difficult for walkers or the newly enthusiastic cyclists. Many fenced areas bore signs on their gates that read 'Cows Only'. The last cows were removed from the parklands only in 1972. Those intent on recreation were also hampered by the absence of facilities: there were no lavatories in the parklands except near the City Bridge, until well into the 1950s.

Other recreational facilities were added to the East Parklands from the 1920s however.  One of the first was a children's playground in Park 15 in 1925. Women's groups had campaigned in Adelaide for children's playgrounds and kindergartens for many years, arguing that they were important to child development, especially in urban areas. But the major changes that created much of the strcuture we see today did not follow until the 1960s, when Town Clerk William Veale proposed to create an  artificial lake, playground and picnic area in Park 14. The resulting Rymill Park opened in late 1960, honouring Lord Mayor Sir Arthur Rymill, who was an enthusiast for parklands improvement. Rymill Park incorporated public sculpture - a 'Piccanniny' drinking fountain by Adelaide sculptor John Dowie and a statue of Lewis Carroll's 'Alice' were unveiled in 1962. The National Rose Society planted a rose garden in the southeastern corner in 1960.

One of the issues to divide city councillors and residents alike was the question of whether to water the parklands or not. For much of the 19th century watering was simply impractical, but later there was a strong body of opinion that thought the grassed areas should be allowed to brown naturally, rather than attempt to mimic European parks. Rather less attractive was the practice, continued until about 1960, of burning, rather than mowing the grass, although this, too, had its supporters. The entire question of watering was resolved in 2010 when an irrigation system, using recycled water from the Glenelg Wastewater Treatment Plant opened, making it possible, finally, to surround Adelaide with swathes of green. 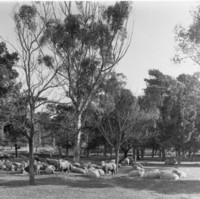 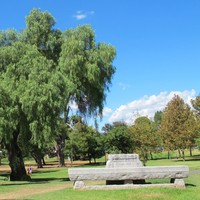 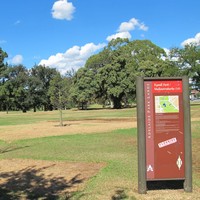 Daniels, Christopher B & Catherine JTait (eds), Adelaide: Nature of a city: The ecology of a dynamic city from 1836 to 2036 (Adelaide: University of Adelaide, Biocity: Centre for Urban Habitats, 2005