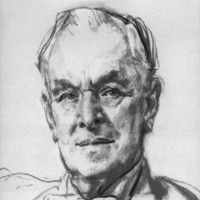 Walter Hervey Bagot was born at North Adelaide on 17th March 1880, the son of pastoralist John Bagot and his wife Lucy Josephine (née Ayers). The Bagot family, established in South Australia by Captain Charles Hervey Bagot, was one of several influential, pioneering pastoralist families that provided leadership in the economic and political advancement of the state.

Raised at the family properties of Nurney House in North Adelaide and Forest Lodge at Aldgate, with regular visits to Ayers House, the residence of his grandfather Sir Henry Ayers on North Terrace, Bagot was exposed to his father’s love of gardening, botany, photography and the arts. He was educated at St. Peter’s College and then served a four-year apprenticeship under Adelaide architect Edward Woods before going to England in 1902 where he studied architecture at King’s College, University of London. Upon graduation, he gained entry to the Royal Institute of British Architects and, returning to Adelaide in 1905, established the firm of Woods Bagot. He also lectured in architectural history for five years at the South Australian School of Mines and Industries. On 18th November 1908 he married Josephine Margaret Barritt and they had three children.

Bagot held that the simplicity of Italian domestic architecture and of English Georgian offered the best models for South Australia and he preferred classical and traditional designs. He regarded the striving for novelty as one of the great dangers of modernism and had a particular distaste for ‘the glasshouses of the modern architect’. He also believed that architecture had to work closely with nature: ‘Architecture is at the mercy of its surroundings. No home is complete without a garden, if only as an intervening space to keep its neighbours at due distance; but to set a house among green lawns and flowers without some co-ordinating idea, is scarcely more apposite than to exhibit a butterfly in a museum.’

He was the architect for work on St. Peter’s Cathedral from 1907 to 1945 and for the Roman Catholic archdiocese from 1905 to 1926, being responsible for the chapel of the Convent of Mercy and the additions to St. Francis Xavier’s Cathedral. As architect to the University of Adelaide from 1910 to 1945, he designed the Bonython Hall (completed in 1936) and the Barr Smith Library (constructed in 1931-32). He had a reputation for developing excellent relations with the workmen engaged on his projects.

Bagot and his wife were regular travellers to Italy and other parts of Europe, with Walter often offering design advice to his colleagues in Adelaide from Italian hotels. His architectural and community leadership, and his interests in northern Italian design and gardens, resulted in several appointments and honours. He was President of the South Australian Institute of Architects from 1917 to 1919, a Commissioner of the National Park at Belair, a Governor of the Adelaide Botanic Garden, and a Patron and founder of the Australian-Italian Association of South Australia. He was also President of the Adelaide Club from 1948 to 1950 and wrote a history of its founders. He was an enthusiastic supporter of plans to beautify Adelaide’s parklands and in 1956 was one of the original sponsors of the National Trust of South Australia. On his retirement in 1960 he was made a Life Fellow of the Royal Australian Institute of Architects and in 1962 was created a Cavaliere (Knight) of the Order of Merit of the Republic of Italy.

Many of his contemporaries described Bagot not as an architect but as an artist, a classical scholar and a romantic. He would sweep into a meeting of the South Australian Institute of Architects with a commanding presence, attired in a black tie, red-lined cloak and top-hat, the ‘perfect gentleman’. 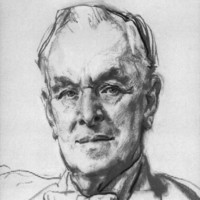 Image courtesy of Woods Bagot Architects. Not to be reproduced without permission 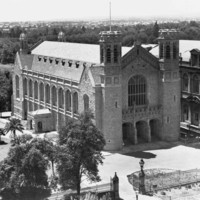 Bonython Hall at the University of Adelaide, 1937. Walter Hervey Bagot was the architect responsible for the building’s design 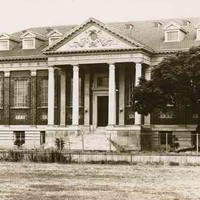 Barr Smith Library at the University of Adelaide, c. 1937. The building was designed by Walter Hervey Bagot

Image courtesy of the State Library of South Australia, SLSA: B23774, Public Domain