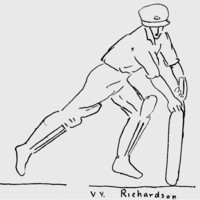 Vic Richardson remains South Australia’s greatest all-round sportsman. Educated at Kyre (now Scotch) College, he became an entertaining personality and was an heroic character on the fields of play. Best known for his first-class cricket career, which spanned most of the years between the First and Second World Wars, and saw him captain Australia on its tour of South Africa in 1935-36, Richardson was unchallenged in his versatility as an athlete. He captained the South Australian football team, represented the state at baseball, played top grade lacrosse, tennis and basketball, and was also a brilliant gymnast. In 1925 he was awarded the U.S.-based Paul Helms Athlete of the World trophy for the outstanding Australasian sportsman.

He was born on 7th September 1894 at Unley, South Australia, the son of accountant and house painter Valentine Yaxley Richardson and his wife Rebecca (née Malloney). Tall and handsome, with a military bearing, Richardson played cricket aggressively, hit a brilliant 138 in his second Test against England at the Melbourne Cricket Ground in January 1925, and was one of the players least daunted by England’s bodyline tactics in 1932-33, scoring solidly against Harold Larwood and Bill Voce. He had been appointed South Australian captain in 1921. His captaincy was rarely orthodox but he led South Australia to Sheffield Shield success in 1926-27 and was the second highest run-scorer for the state until the mid-1960s. His total included 27 centuries. He was Australian vice-captain under Bill Woodfull on the 1930 tour of England and the 1932-33 series at home, and captained an Australian side to New Zealand in 1928 as well as to South Africa in 1935-36.

Apart from captaining Australia and South Australia at cricket, Richardson led the state and Sturt Football Club in League football. He played in three Sturt premiership sides in 1915, 1919 and 1926, and captained South Australia in 1923 and 1924. Originally a ruck-rover and defender, he was a centreman when he tied for the 1920 Magarey Medal (South Australia’s highest football award) and was defeated on a re-vote. He was posthumously awarded a medal in 1998.

After his retirement from major sport Richardson became a perceptive sporting journalist on the Advertiser and had a long career as a radio commentator. He was sporting editor of Radio 5AD and an outstanding cricket commentator in his A.B.C. Test broadcasts with former English captain Arthur Gilligan. He was made an O.B.E. for his services to cricket in 1954. In 1966 a road leading to Adelaide Oval was named after him and the following year the eastern entrance gates, designed by Ian Hannaford and featuring sculptures by John Dowie, were named the Victor Richardson Gates. A book of reminiscences, The Victor Richardson Story, published in 1967, brought to life many of his sporting experiences.

In addition to his sporting interests Richardson had some involvement in political issues. He was unpopular in the Port Adelaide district and Labor circles for many years following his role in 1930 as a strikebreaker during a wharf dispute. He later became a prominent member of the Liberal and Country League and was a President of the Kingston sub-branch. During World War II he served with the R.A.A.F. in Australia, India and Burma, rising to flight lieutenant.

Richardson was married twice. His first marriage to Vida Yvonne Knapman on 29th January 1919 produced one son and three daughters. His second wife was Peggy Chandler (née Herbert), whom he married on 30th May 1946. Three of his grandchildren carried on his sporting prowess, with Ian and Greg Chappell becoming leading Australian Test cricketers and captains, and Trevor Chappell also playing in the Australian eleven. Vic Richardson died on 30th October 1969 and was cremated. 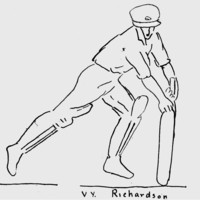 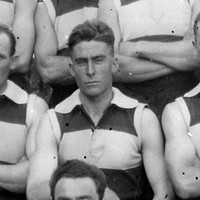