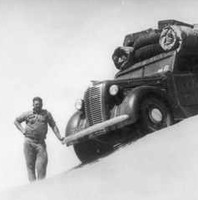 Kruse takes on a job in general cartage and mail delivery at Yunta in South Australia's mid-north.
1936 - 1957

Kruse uses a Leyland Badger diesel truck to deliver mail and supplies along the track between Marree and Birdsville.
1952 - 1953

'The Back of Beyond'

Film director John Heyer accompanies and documents Kruse on his mail run. The resulting documentary film, 'The Back of Beyond' wins the Grand Prix Assoluto at the 1954 Venice Biennale.
1955

Kruse was bestowed the honour of MBE for his services to the Royal Mail.
1986

Kruse is invited back to the Birdsville Track to participate in the Jubilee Mail Run. During this trip, his abandoned Leyland Badger truck is relocated at Pandie Pandie Station.
1993 - 1999

With the assistance of friends, Kruse resurrects his Leyland truck to re-enact his run on the Birdsville Track. A film documenting this feat, 'Last Mail from Birdsville: The Story of Tom Kruse' is released to commemorate the event.
2011

Kruse dies in Adelaide at the age of 96.

Esmond Gerald ‘Tom’ Kruse was born on 28th August 1914 at Waterloo, South Australia. As his father was a blacksmith, Tom grew up around machinery and farming activities. After leaving school and working on various farms in the area, the onset of the Great Depression and the lack of a job drove him north to follow in the footsteps of his elder brother, Arthur ‘Snow’ Kruse, who at the time was working at Yunta in mid north South Australia.

It was at Yunta that Tom met John Penna, who held the position of postmaster and small time transport operator. Penna had set up a local cartage operation, and in 1932 offered Tom a job in general cartage and mail delivery in the area. It wasn’t long before John Penna decided to move on and sold his cartage business to a rival named Harry Ding. Ding was an early pioneer when it came to the application of the internal combustion engine to outback transport. Having recently purchased a Leyland diesel truck, Ding was looking to expand his business interests in the area and thus take on mail runs. Ding landed the lucrative Marree to Birdsville mail delivery contract and put one of his best drivers (Tom) and most reliable trucks (the Leyland diesel) on the run.  Whilst the Birdsville Mail Run, as it was known, was not highly populated, it was long (523 kilometers) and difficult, crossing many sand dunes. Worst of all, dry rivers along the track were prone to flash flooding in the right season.

Tom Kruse’s story would possibly have disappeared into the background history of the outback had it not been for John Heyer and the Shell Film Unit. Director of the Shell Film Unit in Australia, Heyer had been looking to film a quintessential Australian story for the Shell Oil Company. Tom had bought Harry Ding’s mail contract, and with his Leyland truck established his own mail run based in Marree. In 1952/53 John Heyer, with a film crew in tow, followed Tom’s mail run up the Birdsville Track and the resulting feature film, The Back of Beyond, was released to critical acclaim, eventually winning the 1954 Venice Biennale, Grand Prix Assoluto.

As a result of the film’s widespread release and popular reception in the United Kingdom, Tom and his work came to the attention of the Monarchy. In 1955 he was bestowed with a MBE for his services to the Royal Mail, as it was officially known. Despite Tom having his substantial debt to the Shell Oil Company written off in return for participation in the film, he sold the mail run in 1957 and subsequently abandoned the Leyland diesel truck on Pandie Pandie Station near Birdsville in the same year.

Tom moved on to other outback activities, including dam excavation (or ‘sinking’ as it was known). Tom became an outback icon with his assortment of old and tired equipment, which he was able to keep going on the ‘smell of an oily rag’. By 1964, Tom with his wife Valma moved their growing family to Adelaide. Tom continued to base himself in Maree and contract for outback earthmoving and haulage.

In 1986 Tom was invited back to the Birdsville Track to be part of The Jubilee Mail Run. It was during this trip that the Leyland diesel truck was re-discovered at Pandie Pandie Station. With increased focus on the history of the outback in subsequent years, the old Leyland was recovered in 1993, and with some help from old friends Tom rebuilt the truck in time to re-run the Birdsville Track mail route in 1999. A film of this re-enactment, called Last Mail from Birdsville: The Story of Tom Kruse was made to commemorate the event. As a result of this and other media coverage Tom’s legacy was discovered by a new generation, which considered outback travel a holiday pastime, rather than a matter of survival.

In 2008 a number of bronze busts of Tom Kruse were unveiled in locations related to his lifetime achievements, including the National Motor Museum in South Australia and the National Road Transport Hall of Fame in Alice Springs. Tom died on 30th June 2011 and is buried at Carlsruhe Lutheran cemetery in South Australia. 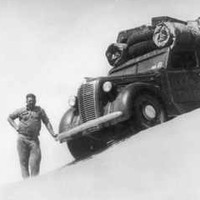 Tom Kruse and his truck in sandhills on the Birdsville Mail Run, c. 1930
Courtesy of/Photographer:EL Walpole 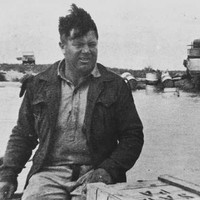 Tom Kruse sitting beside a bore hole pond on the Birdsville Mail Run, 1930 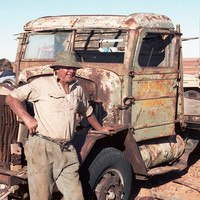 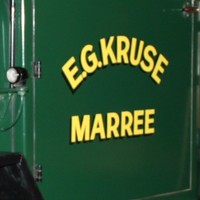