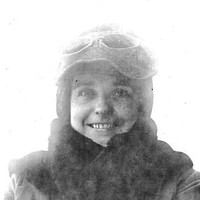 Lady Deborah Moulden was Lady Mayoress of the City of Adelaide (married to the Lord Mayor) between 1919-1921.

Lady Hackett Moulden was married in three states to notable men and widowed three times.  Of all the Lady Mayoresses of the City of Adelaide, none could surpass Lady Deborah Moulden, wife of Frank Beaumont Moulden, Lord Mayor from 1919 to 1921, for sheer eccentricity, ‘fire’ and being an individualist. She ‘possessed a most pleasing delicacy of feature, [had] dark blue eyes and raven hair.’ (Australian Dictionary of Biography A Hasluck) Indeed a beauty, as a 1908 portrait of her by Florence Fuller now in the National Portrait Gallery testifies.

Deborah Drake-Brockman was born 18 June 1887 at West Guildford (which became Bassendean in 1922),  Western Australia as one of three daughters and four sons to Frederick and Grace Drake-Brockman.

Adventurous and forthright, when she was 18 years old she married the distinguished John Winthrop Hackett who was remembered for being a charmer with a melodious Irish voice.  This was in August 1905, despite her family’s disapproval for he was 40 years older than her. As both an editor of the newspaper The Western Australian and politician, he was knighted in 1911 and appointed KCMG in 1913. They had four daughters and one son at the time of Deborah becoming Lady Hackett. When her first husband died in 1916 his estate realized £700,000.

During the eleven years she was married for to Sir JW Hackett they lived in Perth. Lady Deborah Hackett was two years a widow at 31 years old and mother of four daughters and a son, when in Adelaide in April 1918, she married Frank Beaumont Moulden whom she’d met on the ski slopes of Mount Kosciusko. Moulden at this time had been an Adelaide City Councilor for Hindmarsh Ward since 1904, and an Alderman since 1913. As a solicitor in his father’s chambers, Moulden & Sons, he dedicated 28 years to the city council. He headed the council’s parliamentary and by-laws committee from 1905, during which time he modernized regulations for traffic control. Shortly after marriage Deborah’s new husband became consular agent for France in South Australia and in the same year was voted as Lord Mayor of Adelaide from 1919-1921.

Their union lasted for 14 years, until he died of a cerebral haemorrhage on 8 April 1932. Four years later she moved from Adelaide to Melbourne and married her third husband Justice Basil Buller Murphy, a barrister who was nine years her junior. After 27 years of marriage, he died in March 1963.

As Lady Mayoress, Lady Hackett Moulden raised £100,000 for Adelaide charities, re-established the SA branch of the National Council of Women and was its president in 1921.  She also became the first State Commissioner of the Girl Guides Association.

During her time as Lady Mayoress she completely transformed her reception room at the Town Hall into an Oriental lounge. She used her artistic taste to produce this exotic style by specially chosen upholsterings, carpet, frieze, electric light shades, and wall decorations.  Easy chairs and settees were covered with chintzes and Japanese cretonne of varying tones in Oriental designs, with cushions to match. Wooden Japanese shades were covered with soft red silk that shed a delightfully becoming glow, and on the walls were many beautiful plaques. In one panel was a magnificent snow leopard skin with head complete, in another was an artistic picture worked in silks, while handsome vases and bowls completed the picture along with bowls of exquisite pink roses and carnations that adorned the tables and piano.

During the 1920 Australian visit of the Prince of Wales (the future King Edward VIII) she cheerfully accommodated half the royal suite in her own home. When the Mouldens lived in the two storey bluestone mansion at 195 Brougham Place known as Lordello they renamed it Moulden Court after extensive renovations. After her husband’s death in 1932 Deborah owned the mansion until 1947 when she sold it to become part of St Ann’s College, the residency for women attending the University of Adelaide.

While married to Sir Frank, and against advice of experts who said it was ‘a wild goose chase’, she invested much of her Hackett legacy in the mining of rare metals in West Australia and the Northern Territory. Her Wodgina mine became the richest source of tantalum (used in high quality steel alloys) in the world. However, during World War II the Australian government requisitioned it for the duration. As she was to say after the war, ‘My metal was used in radar and radar saved Britain.’

Deborah’s legacy included her popular publication Australian Household Guide compiled in the year of the death of her first husband in 1916. Heralded as the Australian Mrs Beeton, she edited a 1,136 page compendium of recipes, domestic advice, household lore and handy hints written by experts in many fields. A month before her marriage to Moulden when she moved to Adelaide it was reported that ‘the cookery book lady is over from Perth’.

So popular was the compendium that a second edition was published in 1940 that raised £10,000 for the Australian Red Cross and was re-titled Lady Hackett’s Household Guide. (UWA University News 20/8/2012 – Household hints from the Hackett family) In 1949 her husband Basil Buller Murphy wrote about her mining interests in A Lady of Rare Metal and in 1958 Deborah also wrote An Attempt to Eat the Moon, a book of legends of Dordenup Aborigines from Western Australia that was illustrated by Elizabeth Durack.

As a teenager she was credited with the discovery of the beautiful Lake Cave near Margaret River, West Australia.  She is also credited with being the first commercial passenger to fly from Australia to England in 1934 when she hired Dutch airmen, Captain Koene Dirk Parmentier and co-pilot Jan Johannes Moll who were returning home after competing in the Centenary Air Race and took her with them to London where she needed to be in a hurry, for business purposes.

In 1932 the University of Western Australia conferred her with the degree of Doctor of Laws as the widow of Winthrop Hackett.

All Deborah’s children had successful lives. One who became very well known in Adelaide before and after the Second World War was Patricia Hackett who was a lawyer, actor and theatrical producer who ran her own theatre known as the Torch.

Lady Hackett Moulden as Dr Deborah Buller Murphy died at 77 years, two years after her third husband in her home in Victoria on 16 April 1965.  However, she was not buried with him in Victoria but in the Karrakatta cemetery, Perth in Western Australia where her first husband was buried. Also buried there are the ashes of her daughter Patricia who died in 1963 after cremation in Adelaide. 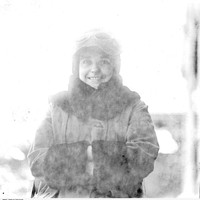 What an amazing story. She wa a real livewire.