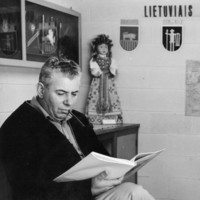 Born in Lithuania on the 10 Feb 1925 the son of a former Lithuanian Director of Railways.
1945

Marriage of Jonas and Klaudija

Here he married fellow Lithuanian Klaudija on the 24 Dec 1945 at Haderslev, Denmark.
1949

Jonas, Klaudija and son arrived in Melbourne on the ship Nelly.
1956

Opening of the Adelaide Lithuanian Museum and Archives

On January 28th, 1967, Juozas Bachunas, President of the World Lithuanian Association came from America and cut the ribbon and declared the museum officially open.

A quiet unassuming immigrant to Australia, Jonas Vanagas gave his free time to collect the history of Lobethal and the Lithuanian community.

Born in Lithuania on the 10 Feb 1925 the son of a former Lithuanian Director of Railways. With the occupation of Lithuania during the Second World War Jonas left Lithuania and made his way to Copenhagen, Denmark. He married fellow Lithuanian Klaudija on the 24 Dec 1945 at Haderslev, Denmark. A year later their only child was born. In Copenhagen, he worked as a book binder. Unable to return home, he came to Australia in 1949 with his wife and child.

By day Jonas worked in the Onkaparinga woollen mills in Lobethal which was settled by Germans in 1842. In his free time, Jonas started to collect information about the history of the town. In a few years he had collected so much material that it provided a good reason to start a museum and later construct a special building to house the collection.

Jonas Vanagas didn’t just collect historical items, which was good for the museum, but also compiled a historical book called Historical and Documentary Collection of Lobethal in South Australia 1842 - 1954 by Jonas K Vanagas. It is a well prepared town history with 190 pictures and 42 historical documents.

On 6 of May 1956 Premier, Sir Thomas Playford, opened the Lobethal Archives and Historical museum.

Jonas was all the while collecting material and any mention of Lithuania in the newspapers. The material was to become the basis of another museum, the Adelaide Lithuanian Museum and Archives.

By 1967, enough material had been collected to open a museum in a specially built room at Lithuanian House at Norwood. On 28 January 1967, Juozas Bachunas, President of the World Lithuanian Association came from America to cut the ribbon and declared the museum officially open. Jonas used his book making skills to bind journals and make albums for the Lithuanian community.

He was an active member of the Adelaide Lithuanian scout group.

Jonas worked as curator until 1989, the year he died. 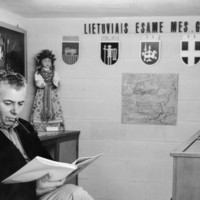