John Bishop was born Lionel Albert Jack Bishop at Aldinga, South Australia, on 26th October 1903, the son of saddler Henry Bishop and his wife Harriett Fortescue (née Field). Educated at Aldinga Public School and Adelaide High School, he was a gifted musician from an early age. He became a pupil of William Silver and in 1919 began studies at the Elder Conservatorium of Music at the University of Adelaide. Two years later he toured with Silver in Europe and the United States, and in 1922 won an Elder Scholarship to the Royal College of Music, London.

On 28th December 1927 he married Margaret Eleanor Harvey and they had two children. From 1928 to 1933 he lived in New Zealand, where he revitalized the music scene, forming orchestras, giving lessons and recitals, organizing a ‘Music Week’ festival and, in particular, encouraging young musicians, an undertaking he referred to as his ‘mission of music’. He then moved to Melbourne, teaching at Scotch College and the Conservatorium. In 1948 he established the National Music Camps, which later led to the founding of the Australian Youth Orchestra.

Bishop returned to Adelaide in 1948 as the Elder Professor of Music and Director of the Elder Conservatorium. He introduced new courses in orchestral playing, an honours degree and a comprehensive library. In 1951 he became the first Australian musician to win a travelling fellowship from the Carnegie Corporation and spent two years touring Britain and America to investigate music education. His professorship saw the formation of the Elder String Quartet, the University Music Society, the University Choir and a Madrigal Club. In 1953 he was appointed O.B.E.

On a trip to the Edinburgh Festival in 1952 he became convinced that Adelaide would be the perfect place for an arts festival of international prominence. In 1958 he discussed his plans with the Chairman of the Advertiser, Sir Lloyd Dumas, and other prominent businessmen, and in 1960 the Adelaide Festival of Arts was born, with Bishop as the first Artistic Director. He continued in this position for the next two festivals.

Theatre director Colin Ballantyne said of Bishop, ‘We were both gamblers who never put ten cents on a horse or cards. We put it cheerfully on works of art, mainly the performing arts. He had the musical maestro look --- long, white, brushed-back hair, a luminous intense face, blazing blue eyes, a slight limp. Most particularly, he had an ability to convince businessmen, members of the Adelaide establishment. . . . The idea of a great music theatre for Adelaide was planted in our consciousness. It became finally the Adelaide Festival Centre with its companion theatres, exhibition areas and restaurants. In my opinion he has done more than anyone else for the performing arts in this state, with the possible later exception of Don Dunstan.

John Bishop was a man of vision with the gift of persuasion. He possessed many remarkable qualities --- an informed idealism, vitality, humour, drive and great charm. He believed strongly that the organization of the arts in Adelaide needed complete rejuvenation. His critics said that he had a slightly pompous manner, more-English-than-English speech affectations and could be a ruthless manipulator. Don Dunstan remembered his sharp wit emerging when, after a performance by the Adelaide Symphony Orchestra of a tone poem called Blue Mountains, composed by its former conductor Henry Krips, he asked of Bishop, ‘What did you think of Henry’s piece?’ ‘Blue Hills,’ came the reply.

John Bishop died suddenly in London on 14th December 1964 and was cremated. The Adelaide Festival Centre board-room is named in his honour and contains his portrait and a bronze bust by John Dowie. Another bust, by Valerie Hicks, is situated in the Elder Hall at the University of Adelaide. 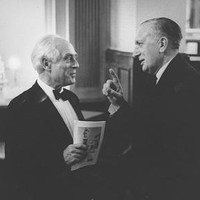 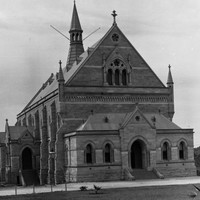