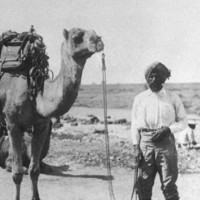 Bejah Dervish, son of Dervish Bejah, was born in Baluchistan, India (now Pakistan), in about 1862. He served in the Indian Army at Kandahar and Karachi under Lord Roberts, attaining the rank of sergeant. Around 1890 he arrived by sailing ship at Fremantle, Western Australia.

In 1896 English mining magnate, Alfred Calvert, sponsored an expedition to investigate the region of Central Western Australia left unexplored by the 1891 Elder Exploring Expedition. He appointed South Australian surveyor and explorer Lawrence Wells as leader of the Calvert Scientific Exploring Expedition, and Wells, who had previously worked with Afghan camel-drivers, chose Bejah Dervish to take charge of the camels, assisted by Said Ameer. The expedition travelled by sea to Western Australia in May 1896 and the seven men and twenty Western Australian camels assembled in the township of Mullewa before leaving the final settlement, Lake Way, in mid-July. On 31st July, east-north-east of Lake Way, Wells formed a depot, from where he set out on a ‘flying trip’ with Dervish, George Jones and seven camels.

Wells recorded in his journal his increasing reliance on Dervish. On 22nd August he named Bejah Hill, writing that Dervish ‘has proved himself a splendid fellow and an excellent camelman’. The journal tells how Dervish found and did his best to destroy poison-bush, how he gathered hundredweights of feed for camels tethered in poison-bush country and how he would not eat if his camels had no feed. After the party had split and Wells had sent his cousin and Jones on a more westerly line, Wells and Dervish depended heavily on each other. They rode together, suffered together and rescued each other. On one occasion, travelling at night, desperately thirsty and with the camels dying, Wells slept in his saddle and entrusted the lead to Dervish, with instructions to steer by a star. Later, the bond between the two men was further strengthened when Dervish accompanied Wells on the search expeditions looking for the two missing men. Dervish’s devotion to his camels and to his leader is evident throughout the journal and is the subject of Douglas Stewart’s poem ‘Afghan’.

Bejah Dervish settled at Herrgott Springs (Marree) and in 1902 bought three sections of land there. He married Amelia Jane Shaw, a widow with eight children, on 15th December 1909 and they had a son, Abdul Jubbar (Jack). Before this marriage Dervish is believed to have fathered a son, Ben Murray, with an Aboriginal woman. Dervish and his wife lived in Marree’s Ghantown in a galvanized iron house, which still exists. With his camels loaded with wool and stores, he was a familiar figure in the far north until he retired in the 1930s to grow date palms at Marree. His final expedition was in 1933 when he and Wells led a small party from Beresford, on the Ghan railway line, westward to McDouall Peak. They almost perished from thirst. In 1939 Cecil Madigan planned an expedition across the Simpson Desert and so impressed was he with Dervish’s ability that he asked him to be his camel driver. Dervish, who was by then about 77, declined and sent his son, Jack Bejah, instead.

Over six foot tall, unstooped, with a splendid, neat, white beard, a striking face, and always impeccably dressed, usually in a turban, wide, loose pants with a shirt worn outside, topped with a jacket and occasionally a waistcoat, Dervish remained an impressive and dignified figure. He spoke Arabic, Hindustani and English. In the film Back of Beyond (1954), he made a brief appearance at prayer. A devout Muslim, he prayed in the mosque at Marree at least three times a day and attributed his lasting good health to his faith.

Bejah Dervish died suddenly at Port Augusta on 6th May 1957 and was buried in the local cemetery. Among the many obituaries was one in the Times, London, which described him as ‘one of the last, and certainly the most famous, of the Afghan cameleers’. 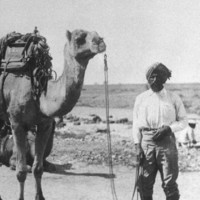 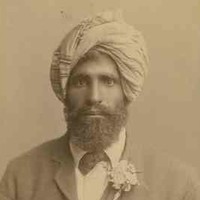 Image courtesy of the State Library of South Australia, SLSA: B 11209, Public Domain 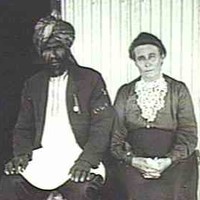 Bejah Dervish and wife Amelia outside their home at Marree, 1910
Courtesy of/Photographer:Mrs AM Hopewell

Image courtesy of the State Library of South Australia, SLSA: B38362, Public Domain