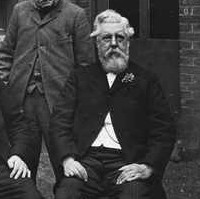 Like his father before him, Alfred Muller Simpson began his working life as a tinsmith. During his apprenticeship in his father’s business he noted that the firm’s output ranged from jam tins to snuff scoops but when he died he left a prosperous manufacturing firm with 500 employees in three Adelaide factories. He was born in London on 4th April 1843, the son of Alfred Simpson and his wife Sarah (née Neighbour). The family emigrated to South Australia on the John Woodhall, arriving in January 1849. Young Alfred was educated at Martin’s Academy, joined his father’s business in 1857 and on his 21st birthday the words ‘& Son’ appeared beside ‘A. Simpson’ above their factory in Freeman Street (now part of Gawler Place).

Fire- and thief-resistant safes became an early speciality of the firm and over the next fifty years Simpson safes came to be used in offices and banks throughout South Australia and interstate. The business expanded and in 1871 the former Congregational Chapel in Freeman Street was purchased. The workers there came to be known as ‘Simpson’s Black Angels’, from the nature of their premises and the fact that washing on the job was practically unknown in those days. In 1876 another factory was built in Pirie Street and two years later Alfred Muller Simpson visited the Paris Universal Exhibition, which prompted him to mechanize his plant.

In 1885 Simpson’s became the first munitions manufacturer in South Australia. Fears of a Russian invasion were rife, and so, armed with a book on the making of submarine mines, Alfred Simpson set about putting them into production. In 1894 a new plant was built in Wakefield Street, which included an electroplating section and furnaces for making hollow-ware and porcelain enamelling, the first such enterprise in Australia. Enamelled street and advertising signs from Simpson’s soon appeared in most Australian capitals, making the firm’s name known throughout the country. With the outbreak of World War I, Simpson’s began making enamelled water bottles for the Australian forces, along with harness fittings, mess-tins, and boilers and enamel ware for hospitals.

Not content with having made his company the largest metal manufacturer in the country, Alfred Muller Simpson was also prominent in public life. He was a leading Freemason, an active promoter of the 1887 Jubilee Exhibition and a founder of the Commercial Travellers’ and Warehousemen’s Association. In 1887 he was elected to the Legislative Council, representing the Protectionist Party, despite his nomination being received only three days before the election and without his having addressed one political meeting. He was opposed to the payment of members of Parliament and donated his entire salary to the state’s defence forces for a shooting prize, which is still contested.

He was a founding Director of the Adelaide and Suburban Tramway Company, a Trustee of the State Bank, Chairman of the Port Adelaide Dock Company and President of the Royal Agricultural and Horticultural Society. As a city benefactor, he donated a tea kiosk for the Botanic Garden and the Edward VII Coronation stained-glass window for the Adelaide City Council Chambers. He still maintained close contact with his business, making a point of paying every worker in person, in gold.

Alfred Muller Simpson married Catherine Allen on 18th October 1871 and they had six children. Catherine died in 1887 and on 23rd August 1888 Simpson married Violet Sheridan. He died on 28th September 1917 and was buried at West Terrace Cemetery. He never owned a car but believed sufficiently in flying to present the Commonwealth with an armed biplane, and his widow provided funds to the University of Adelaide for an aeronautics library in his memory. Simpson Appliances continues to operate today as part of the Electrolux Group. 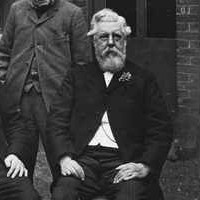 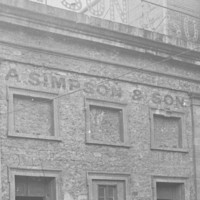 What a wonderful man A.M.Simpson. It is a pity that all our polititions do not thik the way he did. He was elected the Legistrative Council of South Australia on a platform that all polititions should not be paid, because it would attract the wrong type of person, which begs the question, HOW MANY OF OUR POLITIONS IN OUR VARIOUS PARLIMENTS ARE THERE MORE FOR THE MONEY THAN THE GOOD OF THE COUNTRY.

What a wonderful record Bronwyn.

Today not tomorrow, a century of progress (Adelaide: A. Simpson & Son Limited, 1954).