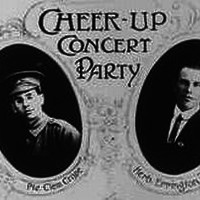 Soon after the outbreak of the First World War in August 1914, Mrs Alexandrine (Alexandra) Seager, a real estate and employment agent, and William Sowden, editor of the Register, were shocked by the lack of public support for troops awaiting embarkation at the suburban Morphettville camp. They formed the Cheer-Up Society, whose volunteer women workers aimed to ‘promote and provide for the comfort, welfare and entertainment’ of soldiers and sailors. The society wished to shield soldiers from alcohol and disreputable city entertainments. At the Cheer-Up Hut, opened in 1915 west of the Adelaide City Baths on King William Road and financed by funds raised at fairs and badge days, the men could have free meals, meet friends, play billiards and enjoy concerts. Departing troops were given great farewells. Food and money were donated by the society’s 10 000 members, particularly from country branches. The Burra Cheer-Up Girls’ Band raised funds and the Murray Bridge Cheer-Ups met troop trains with refreshments. For Seager, with a husband and three sons in the army (one died at Gallipoli in 1915), and the other women, this was a labour of love, a maternalist contribution to the war effort.

The Cheer-Up Society revived during the Second World War and offered hostel accommodation from 1941. Volunteers again provided thousands of meals along with concerts, dances, picture shows and ‘home comforts’. With many troops passing through in 1942 and 1943 billeting was organised and a second hut opened at the Palais Royal on North Terrace east.

After the Second World War Hut No. 1 and the SPF Hostel were sold to the state government which converted them to the Elder Park Migrant Hostel, providing initial accommodation for newly arrived migrants from Europe. The Cheer-Up Society disbanded in 1964 and its funds and assets were distributed to welfare and service groups. A Cheer-Up Association succeeded the society but the gatherings of these former members of the society fell away in 1970 when the hostel was demolished for the construction of the Adelaide Festival Centre. 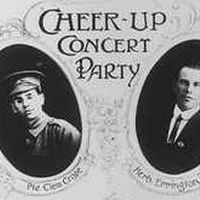 Image courtesy of the State Library of South Australia, SLSA: B55448, Public domain 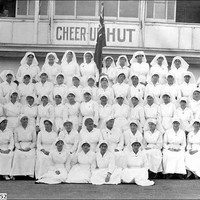 Hi Wendy, If you click on 'Sources' above you will see where the information for this article came from. I think if you're trying to track down an individual the best place to start would be: State Library of South Australia, SRG 6, Cheer-Up Society records, 1914–1970. If you search for SRG 6 here: http://www.slsa.sa.gov.au/site/page.cfm you may be able to narrow the field a little.

Mills, Frederick J, Cheer up: A story of war work (Adelaide: Cheer-up Society, Board of Management, 1920)

Associated with:
The Second World War