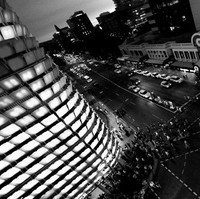 The Rundle Lantern is officially launched by Adelaide's Lord Mayor.

Lighting up Adelaide since 2008, the Rundle Lantern is an example of innovative public artwork in the city centre.

Sydney and Adelaide-based digital design firm Fusion won the Adelaide City Council contest to revitalize the corner of Pulteney and Rundle Streets over six other entries. Launched on 24 October 2008 by the Lord Mayor (and followed by a block party with street performers), the Rundle Lantern covers 40% the exterior of the Rundle Street car park. The Lantern's construction cost $2 million, and its dynamic computer software-run displays provide opportunities for collaboration with local artists and event organisers. Sixteen million colours can be projected onto the Lantern. Its 748 screens encompass nine floors, or 1066 square metres. However, to ensure pedestrians fully enjoy the show from their perspective, the screens are not square: they each measure 1 by 1.1 metres.

The Rundle Lantern has been recognized both regionally and nationally for its creative use of space and technology. It won awards in three categories at the South Australian Architecture Awards, in Urban Design, Collaborative Design, and the auspicious Adelaide Prize. In October 2010, Fusion Graphics won the Pinnacle Award for Digital Media at the Australia Graphic Design Association awards for their design and execution of Rundle Lantern, beating 241 other entrants.

The Lantern's showtimes are sunset to midnight Monday to Thursday, and sunset to 2 AM Friday to Sunday. The Adelaide City Council runs the Rundle Lantern shows and actively collaborates with local artists and organisations for topical displays. The Rundle Lantern Twitter announces such partnerships. 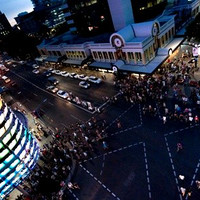