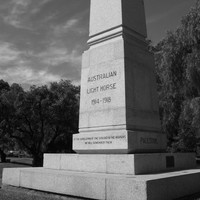 The Light Horse Memorial is dedicated to South Australian Light Horsemen who died in, or as a result of, action in the First World War in three theatres of battles – Egypt, Palestine and Gallipoli.

Light horse regiments were mounted infantry, as distinct from cavalry. They had served and proved themselves in the Second South African (Boer) War of 1899–1902. During the First World War (1914–19) the 3rd and 9th Light Horse Regiments and a squadron of the 11th Light Horse Regiment were formed in South Australia. Many who enlisted in these regiments came from country areas.

Most of the regiments’ training was conducted in Australia, but final training took place in the Middle East, which became their main area of operation. While they served dismounted at Gallipoli, their major contribution was made in Egypt and Palestine as part of the ‘Desert Column’ against Turkey. Men and horses demonstrated great resilience under harsh conditions.

The 3rd Light Horse Regiment was raised in Adelaide on 17 August 1914. It left Australia in October 1914, serving at Gallipoli, in defence of the Suez Canal, and in Sinai and Palestine. The 3rd sailed for home on 16 March 1919.

The 9th Light Horse Regiment had formed in Adelaide by October 1914 and sailed from Australia on 11 February 1915. It also served at Gallipoli and in Egypt, Palestine and Damascus. While waiting to embark for home, the 9th was called upon to quell the Egyptian revolt in March 1919. The regiment sailed for Australia on 10 July 1919.

The 11th Light Horse Regiment left Australia on June 1915 for action at Gallipoli, in defence of the Suez Canal and in the Sinai Desert and Palestine. It also participated in the suppression of the Egyptian revolt before leaving for home on 20 July 1919.

Casualties amongst Light Horsemen were significant but not as great as the deaths incurred on the Western Front in France and Belgium. Horses suffered greatly and only one, ‘Sandy’, made it home. This was the horse of Major-General Sir William Bridges who commanded the Australian Imperial Force at Gallipoli and was wounded fatally there in May 1915. Costs and quarantine concerns meant that the many remaining horses were not sent back to Australia. They were either destroyed or sold. Indian cavalry units bought horses from the 3rd Regiment.

The First World War was the last war in which horses were used as an integral part of offensive tactics. Modern artillery made them too vulnerable and their offensive role was replaced by tanks.

The initial suggestion for a memorial to the light horsemen was made by Mrs Carew Reynell at the end of 1918 at a meeting of the Women’s 9th and 11th Light Horse Regimental Club. She maintained that, ‘it would be a fine act of the next-of-kin to start a fund for the erecting of a memorial to the memory of the fallen men of those regiments’. She was supported by Adelaide medical practitioner Dr Charles Duguid, who had been an army surgeon in a light horse regiment. He agreed to donate the proceeds from his book, The Desert Trail, to the construction of a memorial, if it commemorated all of the light horse regiments.

Fundraising for the memorial began in earnest in January 1919 with the formal acceptance of Duguid’s offer at a meeting of light horse friends. A fundraising committee was elected with Duguid as president. He was committed to the project and aimed for a memorial ‘that would imbue the rising generation with the spirit that had permeated the hearts of their elders’.

It was first proposed that the memorial be of a bronze horse and rider and be located in the National War Memorial Gardens on King William Road. However, donations were slow and funding proved difficult to secure. Government assistance was not forthcoming due to economic constraints. In an attempt to generate more funds the Light Horse Memorial Committee called a public meeting involving prominent public figures in September 1921. Commissioner of Police Brigadier-General Leane chaired the meeting and General Sir Granville Ryrie, who came from Sydney for the occasion, was the main speaker. He had been in charge of the 2nd Light Horse Brigade comprising New South Welsh regiments during the war. Ryrie spoke of the impact of the desert heat on both men and horses; at one point 100 men a day were ‘down with heat apoplexy’. He believed that, in spite of great hardship, they played a central role in defeating three Turkish armies, which marked the beginning of the ‘crumpling of the Central European forces’.

Service organisations such as the Cheer-Up Hut rallied to the call for help. In 1922 the Cheer-Up Hut organised a fete. A further large Cheer-Up Hut fundraiser in August 1923 was launched by Governor Lieutenant-General Sir Tom Bridges; he had been a mounted infantry officer. Dr Duguid then noted that there was only one other memorial to the light horse regiments; at Port Said on the banks of the Suez Canal. Sir Ross Smith bequeathed £40.

In spite of this support, contributions were insufficient for a bronze sculpture. Consequently, a granite pyramid was suggested as an alternative said Duguid, ‘for it was to the pyramids that the men first went, and then on to Palestine’. Finally, in September 1923 the committee accepted the design of a stone obelisk styled on ancient Egyptian columns submitted by South African-born George Gavin Lawson, a public service architect. Lawson placed an electric globe held in position by a bronze bracket at the apex of the monument. The light was intended to be lit from sunset to sunrise. Mrs BS Roach, the honorary secretary of the Light Horse Memorial Committee, commented in the Register of 5 April 1924, ‘a light will burn every night from sunset to sunrise as a sign that our dead are not forgotten, either by night or day. I like this idea. It seems to carry out Laurence Binyon’s expressive lines: – ‘At the going down of the sun, and in the morning, We will remember them’.

The Light Horse Memorial obelisk and base cost £1200, most of which came from friends and relatives of the fallen. The Adelaide Repertory Theatre donated proceeds of its performance of ‘The Laughing Lady’ on 9 April 1924 to the memorial fund. But the committee could not raise enough money for the proposed electric light. The Adelaide City Council came to the rescue by agreeing to install and maintain a light of 200 candlepower.

The site for the memorial suggested by the committee was by the gates of Adelaide Botanic Garden. However, the council refused this request and instead offered a parklands site on the corner of East Terrace and North Terrace (Botanic Road).

The Light Horse Memorial was unveiled by Governor Bridges at a Sunday service on 5 April 1925. A troop of returned light horsemen formed the guard of honour. The 10th Infantry Band and Highland Pipe Band accompanied the singing of the St Peter’s College Chapel Choir.

The memorial’s 11m high grey Harcourt Victorian granite column is set on a stepped square base. The granite was manufactured at the South Australian Monumental Works. The memorial sits on a rise in the parklands at a very busy intersection which gives it prominence.

Several additions have been made to the site since the obelisk’s unveiling. The park itself is now known jointly as Kadlitpinna/Rundle Park/Park 13: Kadlitpinna was a Kaurna warrior called ‘Captain Jack’ by the early colonists (Jones, pp217, 224).

In April 1967 the War Horse Memorial from Victoria Square was installed here. In 1995 a white granite memorial was erected by the 2/9th Australian Armoured Regiment Group Association (the Royal Australian Armoured Corps being a successor to the light horse brigades) near the two memorials. This, the planting of a Cyprus plane tree and the associated bronze plaques were in recognition of the jubilee of VP Day, 15 August 1945. On 31 October 2002 Premier Mike Rann unveiled a bronze plaque on the Light Horse Memorial on the 85th anniversary of the charge of the 4th Light Horse Brigade at the Battle of Beersheba in Palestine on 31 October 1917 ‘to commemorate the passing of Private Albert Whitmore 1899–2002 the last surviving Australian Light Horseman and the last surviving South Australian World War I veteran’.

The light still shining at night from the obelisk resonates to this day with Binyon’s famous quote inscribed on the front side. 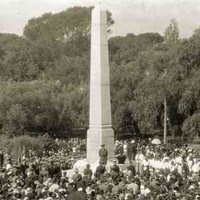 Image courtesy of the State Library of South Australia SLSA: B 2601, Public Domain 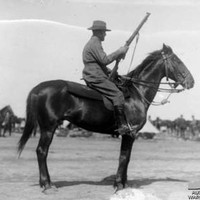 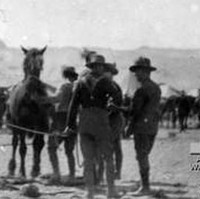 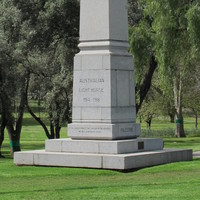 Hi Gavin,
You'd be best of looking for a specialist dealer in war memorabilia. That sort of thing does come up online as well if you take a look around. The History Trust is not able to sell items or give advice on private sales.

If you are looking for more information on your Grandfather's service you might find the Australian War Memorial research guide helpful - https://www.awm.gov.au/collection/understanding-the-memorials-collection...

How can I contact you regarding my grandfather who served the 3rd lighthorsemen who was based in Egypt.
I was wondering about buying medals for a family reunion.

Hi Belinda,
You could try here: https://vwma.org.au/ or of course the Australian War Memorial website: https://www.awm.gov.au/ - best of luck with your search.

Hi, Im hoping you can help me in the right direction. I have inherited a WWI medal and a 9th Light Horse medallion. I also have a series of photos, some with writing on the back.
My great grandfather, who I believe this belongs to, joined near Kapunda SA. Most of my living relatives have passed and I'd like to find out who it belongs to and the history. The family name was either Bryant or Symes

Thanks for your time,
kind regards Belinda