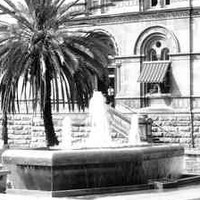 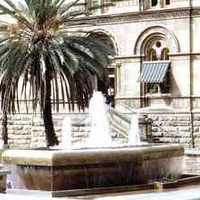 Accepted by the City of Adelaide 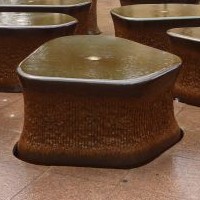 John Lavington Bonython was born in Adelaide on 10 September 1875 and lived and worked within its bounds all his life. He succeeded his father, Sir John Langdon Bonython (1848-1939), as sole proprietor of the Advertiser newspaper before becoming a director when it was sold and converted to a public company in 1929. He served on the board of several companies and was active in the Housing Trust of South Australia, the Adelaide Chamber of Commerce and the Liberal and Country League of South Australia.

Lavington Bonython had a long-standing interest in the affairs of his city. He became an Adelaide City Councillor in 1901 and was on the council for 43 years in the period to his death. He served as Mayor (1911–13) and Lord Mayor (1927–30): the title was upgraded in 1919. He worked assiduously to preserve the parklands and other aspects of the city’s heritage. Bonython was knighted in 1935 and in the same year he donated a clock for the Albert Tower of the Town Hall, which had been without one since its construction in 1866. Sir John Lavington Bonython died on 6 November 1960.

The Lavington Bonython fountain was installed and formally accepted by Lord Mayor James Irwin OBE on 20 November 1965. It was replaced by a water sculpture, ‘14 Pieces’, in 2005 as part of the redevelopment of North Terrace.

The fountain consisted of a stone basin featuring three vertical water spouts. Water flowed over the four sides of the basin, disappearing as a sheet and overflowing into a larger pool, which had three jets of water that fell obliquely into its centre.

A plaque marking the place where the fountain was situated acknowledges the memory of Sir John Lavington Bonython. 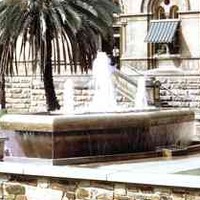 The Bonython Fountain outside the Museum, in Adelaide. c.1968
Courtesy of/Photographer:Bernice M Wenmouth

Image courtesy of the State Library of South Australia SLSA: B 64310/333, Public Domain