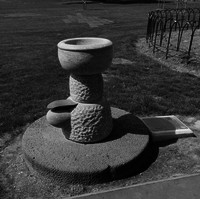 The sporting star dies in hospital, unable to recover from an operation 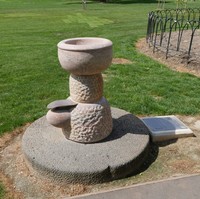 The fountain is restored and an extra plaque added.

The J Reedman Memorial Drinking Fountain was erected in Creswell Gardens on 7 September 1929. It is made of Angaston marble and signifies the achievements of John Cole Reedman, an Australian sports legend.

Also known as Jack ‘Dinny’ Reedman, the sports superstar was born in Tanunda, South Australia on 9 October 1865. His passion for football, cricket and swimming allowed him to excel in each field. He played district football in 1885 with the Medindie club and then with South Adelaide, North Adelaide and West Adelaide. His skills as a captain and eventually a coach were accompanied by a total of twelve premierships across his football career. Reedman also played cricket from 1885 to 1913. Between 1889 and 1890, he was leading bowler of South Australia. Reedman’s passion for the game led him to refuse offers of leaving the state because he felt that his talents would inspire younger generations in his home state. Declining health over the years saw him attend hospital for an operation from which he never recovered. He died on 29 March 1924, leaving behind his wife, children and grandchildren.

Cherished memories of the late J Reedman still remained strong in the minds of football enthusiasts. It was agreed by the North Committee that a memorial fountain would be erected outside Adelaide Oval and that proceeds from social events would benefit the movement. The Memorial Fountain was unveiled on 7 September 1929 by Sir Wallace Bruce and witnessed by friends and admirers. Sir Wallace Bruce announced:

We remember Reedman as a fine colleague, a popular leader and a very fine gentleman. He did much to foster sport in South Australia and his example should be an inspiration to play the game (The Register News-Pictorial, 9 September 1929).

The Lord Mayor then accepted the fountain on behalf of the City of Adelaide. The fountain was restored in 2001 with an extra plaque added. 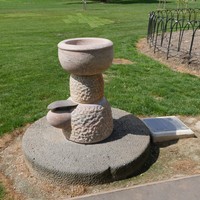 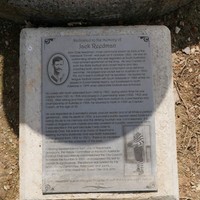