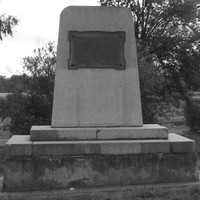 This monument marks the location where Colonel William Light began his survey for the City of Adelaide in 1837. The first public offices were also built here, as were the huts of Light and Resident Commissioner James Hurtle Fisher.

Surveyor-General Colonel William Light commenced surveying the site on which the City of Adelaide was to be situated on 11 January 1837. The survey of 1042 ‘town acres’ was completed in just two months, despite the vegetation and a shortage of staff and resources. He was instructed to lay the city out with streets of ‘ample width’ arranged for the convenience of residents and ‘the beauty and healthfulness of the town’, and he was also required to provide for reserves ‘for squares and public walks’ (Advertiser, 17 July 1929, p10). These instructions were famously met in Light’s Plan, which set out Light’s design for the city. His grids of streets, the six squares and the surrounding parklands determine the layout of Adelaide today: it is a ‘city in a park’.

In March 1837 town acres were allocated by lot to people who had bought land before leaving England. The acres remaining were then sold by auction. No treaty was entered into with the Kaurna people, who had lived on the Adelaide Plains for generations, nor was the land purchased from them or any compensation paid to them for the loss of their land and livelihood. Revenue generated went into the colony’s coffers.

Offices of the Lands Department, headed by Resident Commissioner James Hurtle Fisher, and the Survey Department headed by Light, were also constructed on this site. Adjoining these temporary wooden structures were the primitive huts of Fisher and Light. All of these buildings were destroyed by fire in the afternoon of 22 January 1839. Tragically, Light and Fisher lost most of their papers and worldly possessions.

In 1926 the Adelaide City Council considered purchasing a run-down cottage at Thebarton where Light had then lived and died in 1839 (Morton, pix). While that opportunity was not taken, one consequence was that in 1927 the South Australian geographer and educator Dr Charles AE Fenner (1884–1955) initiated the formation by the council of a Historical Memorials Committee ‘to stimulate interest in the work of famous men and our fathers who begat us’. The committee was chaired by Alfred Allen Simpson (1875–1939), the chairman of directors of A Simpson & Son Ltd, president of the Royal Geographical Society of Australasia (SA Branch) and Adelaide’s mayor from 1913 to 1915.

A year later, at a meeting in the rooms of the Royal Geographical Society on North Terrace, the committee recommended placing memorials across the state, including one ‘memorialising the place where the survey of Adelaide had begun’. The Adelaide City Council agreed and the work was commissioned.

The memorial took the form of an obelisk and base of pink granite from around Palmer in the Mount Lofty Ranges. It was erected on the parklands opposite the Newmarket Hotel on the corner of North Terrace and West Terrace.

The monument was unveiled on 16 July 1929 at a small ceremony attended by members of the Adelaide City Council, the Historical Memorials Committee and a few citizens. Alfred Simpson opened proceedings. Lord Mayor John Lavington Bonython unveiled the memorial by pulling away the flags that covered it. All praised Light’s placement and plan of the city.

A plaque on the obelisk records that the survey of Adelaide began in the vicinity in January 1837, the colony’s first public offices were erected there in that year and the dwellings of James Hurtle Fisher and William Light there were destroyed by fire on 22 January 1839. Indeed, Light’s demise from tuberculosis may have been hastened by the loss of his lifetime’s records and possessions that he sustained in the fire.

In October 2011 the memorial survey marker was moved into storage while a new Royal Adelaide Hospital was being built on the site. Lord Mayor Stephen Yarwood said, ‘The monument is to be restored before being placed among the new hospital landscape, bringing an important part of Adelaide’s history into its future’. 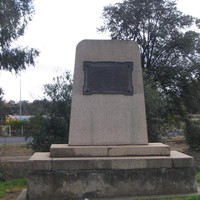 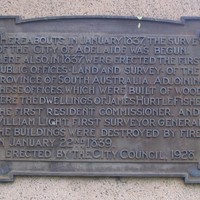 Close up of plaque on Colonel Light's Survey Marker Monument, 2010.