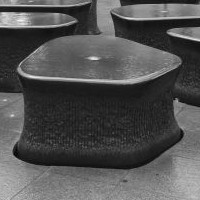 The thin sheet of water sliding across the top of each of the 14 pieces invites you to dip your hand into the flow. The shapes beneath evoke the fossilised vertebrae of Ichthyosaur, an extinct marine reptile on display in the adjacent South Australian Museum. They are carved from Adelaide black granite and Calca red granite. The central hole in the top of each piece, through which the water wells up, suggests the spinal column that once connected the vertebrae of the living animal. The 14 pieces are arranged in an egg shape, with spaces to walk in between. The work refers to notions of excavation, reconstruction and conservation.

‘14 Pieces’ was commissioned by the Adelaide City Council, with contributions from the Government of South Australia and SA Water, as part of a plan to revitalise and re-landscape North Terrace. It replaced the Lavington Bonython fountain that had occupied the site from 1965.

The sculpture was unveiled by Premier Mike Rann and accepted on behalf of the City of Adelaide by Lord Mayor Michael Harbison on 16 October 2005.

Hossein Valamanesh was born in 1949 in Tehran, Iran. He graduated from the School of Arts in Tehran in 1970. Between 1968 and 1971 he worked with the renowned theatre director Bijan Mofid. Hossein arrived in Perth, Western Australia in 1973. He travelled to central Australia to work with the Round Earth Company and Aboriginal children at different settlements. In 1975 Hossein commenced further studies in visual arts at the South Australian School of Art. Since graduating in 1977 Hossein has exhibited widely in Australia and overseas. His work is represented in most major Australian collections. He was awarded an Australia Council Fellowship in 1998. Another public artwork in Adelaide by Hossein is 'Knocking from the inside' (1998) on the northern plaza of the Intercontinental Hotel, North Terrace.

Another of their collaborative public artworks in Adelaide is ‘Ginko gate’ which frames the Botanic Garden’s western entrance: it opened in July 2011.

Ichthyosaurs were air-breathing, dolphin-like carnivorous reptiles that swam in the cold inland sea covering the interior of Australia 120 million years ago. Ichthyosaurs (Greek for ‘fish lizard’) first appeared 245 million years ago and disappeared about 90 million years ago, approximately 25 million years before dinosaurs became extinct. They averaged 2–4m in length with a porpoise-like head and a long, toothed snout. Ichthyosaurs were able to swim at up to 40km/hr. But they were neither fish nor mammals. They swam with side movements of their tail, unlike mammals which swim with up and down movements of the body. They had the ability to generate body heat to survive in colder climates. Ichthyosaurs have no living relatives today. The South Australian Museum’s ichthyosaur collection includes a spectacular spinal column made up of opalised vertebrae. 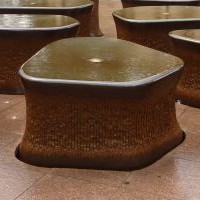 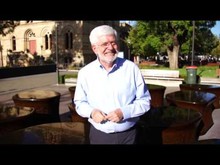