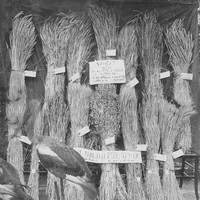 From 1850 to 1890 South Australia dominated the Australian wheat industry.

The story of wheat is more than the story of a versatile food grain. In South Australia, the history of the production, transport and marketing of wheat opens wider windows onto society, economics and politics. The comparative advantage of the Australian grain industry in international markets depends on the availability of suitable land, adaptive management of dry-land farming systems, access to continuing research and development, and the support of appropriate infrastructure. In each case, robust interaction in South Australia between wheat growers and the state has contributed to patterns of development of significance for Australia as a whole.

Growth and development of the wheat industry in South Australia

Wheat production began in the higher rainfall areas south of Adelaide. However, access to the British market following the repeal of the corn laws in 1846, an indented coastline facilitating sea transport, and the evolution of local farming techniques shifted production to areas of lower rainfall. These included the Adelaide plains, the Mid North, Yorke Peninsula, the Murray Mallee and southern and western parts of Eyre Peninsula. From 1850 to 1890 South Australia dominated the Australian industry. Significant initiatives included local and farmer-led innovations in machinery and land management (stripper harvester and stump-jump plough), the formation of the Agricultural Bureau, which provided an enduring and distinctive forum for farmer discussion groups; the setting up of Roseworthy Agricultural College (1883) and the Department of Agriculture (1902); the recruitment of scientific pioneers from Britain (John Custance and W Lowrie); the persistent tackling of a wide range of technical problems (rust, bunt, phosphate deficiency, effective use of fallow and rotations); and defining the limits of agricultural settlement. Pushing beyond Goyder’s Line led to unsustainable development in the north, while in other areas phosphate deficiency led to soil exhaustion and declining yields. More positively, the skills of South Australian farmers made them welcome immigrants in the developing wheat belts of other states.

In the early twentieth century the widespread use of superphosphate and the introduction of improved varieties (led by William Farrer in New South Wales) gave the industry new strength. Unfortunately, after the First World War poorly executed soldier settlement schemes followed by low grain prices during the Great Depression led to much suffering by farm families. Recovery depended on the return of higher prices during and after the Second World War.

Variability in farm incomes gave wheat-belt politics a distinctive style. Although seasonal variations and fluctuating yields drove income variability, farmers tended to focus political demands on the cost of inputs, access to infrastructure and, especially, on prices received for grain. In other states in the 1920s wheat growers provided the shock troops of the early Country Parties but in South Australia wheat farmers were mostly firmly embedded in the Liberal Federation. In the 1930s Mallee farmers in South Australia contributed to the formation of a network of wheat-grower organisations independent of party politics. The successors of these organisations are key constituents of the National Farmers’ Federation, the peak organisation representing Australian farmers.

In the 1920s and 1930s low wheat prices and perceived unfair marketing practices led to calls for state regulation, including marketing and price-support schemes. Arrangements initiated during the Second World War continued with solid grower backing until the 1970s. Thereafter changing circumstances, including the larger scale of many farms, the breakdown of natural monopolies by improved technology, and the connection of farmers to the wider world by improvements in information and communications technology, led to the gradual deregulation of wheat handling and marketing.

Wheat farming in the twenty-first century

By the beginning of the twenty-first century South Australian grain and mixed farms in what had once been the wheat belt were evolving into independent, capital intensive, knowledge-based businesses. However, as at the outset, management of a dry and fragile landscape remains a substantial challenge. Recent trends to whole farm cropping in successive years place heavy pressure on the land. Dry-land salinity is an increasing problem. Extensive use of chemicals to suppress weeds, and proliferation of weeds through the easy movement of grain, livestock and farm machinery, place farmers on an unwelcome treadmill. Further, plant variety rights and the promise and challenge of genetically modified organisms confront farmers with issues that transcend technical and rural concerns. For these and other reasons, managing grain farming sustainably in South Australia will call on all the capacity for adaptiveness and ability to apply scientific knowledge that pioneer wheat farmers demonstrated so convincingly. 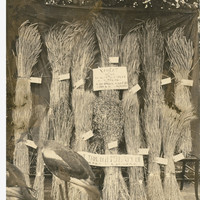 Image courtesy of the State Library of South Australia, SLSA: B 3892, public domain. 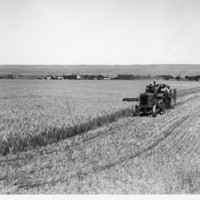 Image courtesy of the State Library of South Australia, SLSA: B 61020/34, public domain

Very helpful,as I am coach driver traveling through regional areas , and enjoy the history