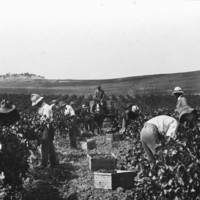 The growing of grape vines dates from the earliest years of European settlement in South Australia. Vines were planted by the South Australian Company during 1837 in Adelaide’s West Parklands, with the first private vineyards planted during 1837–38 by John Barton Hack and George Stevenson at North Adelaide. Hack’s vineyard was moved during 1839 to his property at Echunga in the Adelaide Hills where he produced his (and the province’s) first wine in l843. German settlers also planted wine-grapes at Hahndorf and Lobethal in the Adelaide Hills and in the Barossa Valley.

Original planting material was obtained from Europe (England, France, Spain and Germany), South Africa, Van Diemen’s Land, Victoria and New South Wales (notably from James Busby’s and William Macarthur’s vineyards) but within a few years Adelaide’s nurseries were producing vine rootlings for sale. Most of the province’s early vineyards were relatively small (often less than a hectare), producing table and wine grapes for home use. Larger growers either sold their crop to a winemaker or operated a winery themselves. The area under vines increased rapidly during the 1860s; by 1866 the province had 2680 hectares of vineyards, and wine production reached four million litres in 1869. The main growing areas were Adelaide, Reynella on the Fleurieu Peninsula and the Barossa Valley.

Grape-growing methods were adapted from European procedures or practical experience in the other colonies. South Australia’s first text on grape-growing and wine-making was George McEwin’s The South Australian Vigneron and Gardener’s Manua1 (1843). Other published sources of information for growers included Letters on the Culture of the Vine by William Macarthur (1844) and AC Kelly’s The Vine in Australia (1861).

Vine growing received a boost with the appointment of a viticultural expert in 1892. Arthur J Perkins became government viticulturist and later professor of viticulture at Roseworthy Agricultural College. Grape-growing was also promoted by the expanding wine export market to the United Kingdom in the mid 1890s and by the government’s successful campaign to prevent the spread of the devastating vine louse phylloxera from New South Wales and Victoria. Demand for export wines resulted in increased vine plantings at Clare in the Mid North, McLaren Vale on Fleurieu Peninsula and in the Barossa. Vineyards were also planted in the new irrigation settlements along the River Murray, where much of the fruit was dried or used to make brandy.

Other well-known viticultural areas include Coonawarra in the South East and Langhorne Creek on the Fleurieu Peninsula. Coonawarra dates from the 1890s but the significance of the region’s terra rossa soils for viticulture was only recognised in the l950s. Langhorne Creek is a long-established region (1850), and since the 1990s has experienced rapid growth. Newer (or revived) viticultural regions include the Limestone Coast, Naracoorte, in the South East, the Adelaide Hills, Kangaroo Island and the southern Eyre Peninsula.

The wine industry has had its fluctuations, with periods of economic depression, world wars and the associated loss of export markets resulting in wine surpluses and removal of vineyards (for example, the vine-pull scheme of the 1980s). Grape surpluses in the 1920s and early 1930s resulted in the formation of grower co-operative wineries. Viticulture in South Australia is benefiting from regional vine improvement schemes and improved soil and water management. Water quantity and quality (often because of salinity levels) are increasing problems in some regions, addressed by improved irrigation practices and the use of under-vine straw mulching. 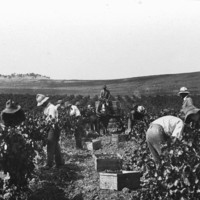 Grape pickers working in a field at Clare, 1925

Image courtesy of the State Library of South Australia, SLSA: B 59055, Public Domain 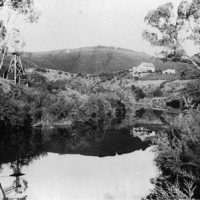 Image courtesy of the State Library of South Australia, SLSA: B 56035, Public Domain

Bishop, GC, The vineyards of Adelaide: A history of the grapegrowers and wine-makers of the Adelaide area (Blackwood: Lynton Publications, 1977)

Laffer, HE, The wine industry of Australia (Adelaide: Australian Wine Board 1949)