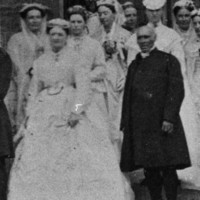 When a non-Aboriginal woman married in the nineteenth century, she delivered herself, any property or earnings (present or future) and any children into the control of her husband. Paradoxically, this was her best chance of ensuring economic survival and social adulthood. Colonists were more concerned with the issues of who might perform marriages and with civil registration than with women’s rights. Marriage and a bourgeois model of family life were central to Edward Gibbon Wakefield’s plan for the colony, but so too was denominational equality. Only Church of England clergy could formalise marriages initially, but the colony’s first Marriage Act 1842 extended authority to clergy of the Church of Scotland, to other Protestant ministers and to rabbis, who were required to seek a licence for each marriage performed. Priests of the Roman Catholic Church acquired the same right in 1844. Civil registration was also instituted in 1842, and previous marriages were retrospectively legalised. The scarcity of clergy prompted Marriage Acts in 1852 and 1867 that allowed for civil marriage. With no minimum age specified, minors could marry with the permission of their parents. The Deceased Wife’s Sister Act 1870, permitting a widower to marry his sister-in-law, was an ongoing controversy: the crown disallowed the four bills passed by the South Australian parliament on this matter from 1857. Marriage to one’s deceased husband’s brother was legalised in 1925.

During the nineteenth century the marriage rate fluctuated, falling steeply with the male exodus to the gold rushes in the early 1850s and again with the economic depressions of the 1870s and 1890s. The proportion of those never married grew steeply at the end of the nineteenth century, reaching peaks of 18.6% of men aged 45–49 years in 1901 and 17.3% of women aged 45–49 years in 1921.

When male desertion of families increased during the gold rushes, the Matrimonial Causes Act 1858 extended facilities for divorce and judicial separation. Whereas men need cite only one ground for divorce, women had to prove both adultery and either cruelty or drunkenness. Further legislation in 1867 protected the property of divorced wives and clarified procedures. The first attempt to protect married women’s property failed in 1872, but under the Married Women’s Property Act 1883–84 a woman gained ‘financial personage’, right to her own property and earnings as well as the responsibility to maintain her relatives, including her husband, if they were destitute.

Efforts to liberalise divorce law in 1889 were opposed by various groups including the Woman’s Christian Temperance Union. But women who were being cruelly treated could gain some relief by leaving the marital home and applying for maintenance from their husbands under the Destitute Act 1881. While this remedy was closed off in 1892, the Married Women’s Protection Act 1896 allowed a woman to apply to a magistrate to release her from living with her husband and make orders allowing for her protection, custody of the children and maintenance if he found the husband guilty of cruelty, desertion or adultery or of failing to make adequate provision for the wife and children. Between 1859 and 1899 there was an annual average of only 9.9 applications for divorce or judicial separation, between 1908 and 1918 the rate rose to a yearly average of 21.6 applications.

With the Infant’s Custody Act 1883–84 a woman could apply to a court to over-ride paternal authority and grant her custody and maintenance of her children. The Guardianship of Infants Act 1887 allowed a woman to be guardian of her children in the event of her husband’s death. The Women’s Non-Party Political Association urged equal custody rights from 1909, with legislation to this end finally enacted in 1940. It was only in 1918 that grounds for divorce were made the same for men and women: the single ground of adultery. Feminist groups sought equality in relation to other aspects of marriage. Men could will their assets away from their wives and children, but the Testator’s Family Maintenance Act 1918 aimed to ensure adequate provision for wife and children.

The last quarter of the twentieth century saw marked changes in marriage and divorce. The Criminal Law Consolidation Act 1975 enabled a further development of married women’s legal rights by permitting husbands to be charged with rape or indecent assault. From 1979 the crude marriage rate fell from 7.6 to 5.5 in 1999, while the average age of first marriage rose from 25 to 28.1 years for grooms and from 22.4 years to 26.2 years for brides. In 1999, 70% of marrying couples had lived together before marriage and 61% had a civil celebrant. An increasing number never marry. The total fertility rate was at a low 1.7 per woman, and almost one-third of births occurred outside wedlock. While many women made financial contributions to the household, well into the mid twentieth century married men were expected to be the family breadwinner. But couples have increasingly assumed a joint economic responsibility, and on divorce women are entitled to a share in marital property. Federal legislation in the 1990s enforced the requirement that non-custodial parents provide financial support for their children.

Indigenous marriage practices were little known by settlers nor recognised as legal by officials. Protection policies required Aboriginal people to seek permission to marry. Marriage to a white man could mean that an Aboriginal woman lost any rights to assistance from the state as an Aboriginal person but did not qualify as a white person. The identity of an Aboriginal man marrying a white woman was not similarly affected. Aboriginal and white men in legal or de facto marriages with Aboriginal women were not guardians of their children, who could be taken away by state authorities. Under the Aborigines Act 1911 the protector of Aborigines was made the legal guardian of all Aboriginal and ‘half-caste’ children under 21 years. The state’s failure to recognise Indigenous marriage meant that children born of these marriages were deemed illegitimate and their mothers therefore were not able to claim the child endowment introduced by the federal government from 1941.

Brock, P, ‘Aboriginal families and the law in the era of segregation and assimilation, 1890s–1950s’ in Diane Kirkby ed., Sex, power and justice: historical perspectives of law in Australia (Melbourne: Oxford University Press, 1995)