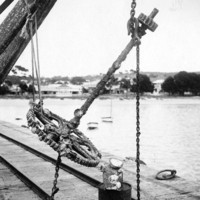 While maritime exploration of South Australia proceeded over two centuries, the major discoveries were made by Lieutenant James Grant RN, Matthew Flinders and Nicolas Baudin in little more than two years.

The first known European sighting of the Australian continent was made in 1606 by the crew of the Duyfken, despatched from Dutch Indonesia to examine New Guinea. Further Dutch discoveries along the western coast followed, then in 1627 the Gulden Zeepaerdt under François Thijssen sailed along the southern coast as far as islands named for the patron saints of the captain and the senior passenger, Pieter Nuyts. This remote area was not again visited by Europeans until 1792, when the French admiral Bruny d’Entrecasteaux was searching for the lost explorer La Pérouse. Meanwhile, Abel Tasman had sighted Van Diemen’s Land (1642), and James Cook’s discovery of the eastern coast had led to the establishment of a British colony in New South Wales (1788).

The shipping route between New South Wales and Europe or India lay south of Van Diemen’s Land, and ten years after Sydney was founded nobody had yet ventured into the unknown waters north-west of the island. After Flinders and George Bass in the Norfolk proved the existence of Bass Strait (1798), the British government ordered James Grant to pass through it on his way to Sydney in the brig Lady Nelson. In December 1800 Grant observed and named Mount Gambier and Mount Schank.

Two months earlier Nicolas Baudin had left France with the corvettes Géographe and Naturaliste, charged with traversing all but Cook’s and d’Entrecasteaux’s coasts. Delays in reaching New Holland induced Baudin to examine first the west coast, then Tasmania, where his ships became separated. The Géographe alone worked west from Bass Strait along the southern coast.

Returning to England from Sydney in 1800, Flinders obtained Sir Joseph Banks’s help in getting approval for a voyage of scientific exploration to Terra Australis from a government very conscious of the French departure. He was appointed commander of HMS Investigator, and finally sailed in July 1801. Reaching the head of the Great Australian Bight in January 1802, Flinders examined Nuyts’s islands, then continued east to explore the unknown coast. This was eventually seen to break off to the north, but he was disappointed to find that beyond lay only a large gulf, Spencer Gulf, rather than a channel separating New Holland from New South Wales. Returning south, Flinders found that the land barring his path was an island, soon named for the kangaroos that provided food. After discovery and examination of the smaller Gulf St Vincent the Investigator met the approaching Géographe on 8 April 1802 at what Flinders named Encounter Bay on the Fleurieu Peninsula.

Flinders proceeded to Sydney along a coast already seen by Grant or the French, while Baudin continued west to connect with d’Entrecasteaux’s work before also going to the English settlement to winter and refresh. Baudin now decided to replace the Naturaliste with the locally built schooner Casuarina, which he placed under the command of Louis Freycinet. Together they returned to examine the unseen southern coast of Kangaroo Island, the shallower areas of the gulfs, and the bays behind Nuyts Archipelago. 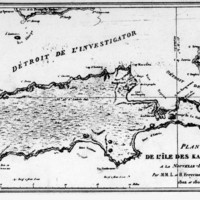 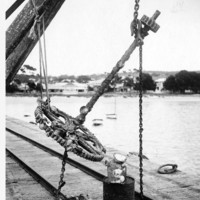 Baudin, Nicolas, The journal of post Captain Nicolas Baudin, Commander-in-Chief of the corvettes Géographe and Naturaliste, assigned by order of the government to a voyage of discovery, translated from the French by Christine Cornell; with a foreword by Jean-Paul Faivre (Adelaide : Libraries Board of South Australia, 1974)

Grant, James, The Narrative of a Voyage of Discovery Performed in His Majesty’s Vessel the Lady Nelson of sixty tons burthen with sliding keels, in the years 1800, 1801, and 1802, to New South Wales  (London: T.Edgerton, Military Library, 1803)