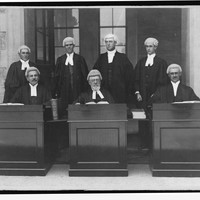 Passing of the Act allows women to practice in South Australian law courts.
1917

Justice John Jeffcott applied standard English legal models when, at the criminal sittings at Adelaide in May 1837, he admitted three Englishmen to practise in the traditional roles of barrister, solicitor, attorney and proctor. They ‘signed the Practitioners’ Roll’ which Jeffcott also initiated – initially a page of the clerk of court’s notebook, then, from 1846, sheets of parchment attached to a rolled length of linen, until a register book was introduced in 1924. English, Irish and Scots lawyers were entitled to practise across the five imported jurisdictions of Common Pleas, Kings Bench, Exchequer, Chancery and Admiralty. Successive judges made ad hoc rules about admissions and practice under the general terms of the Supreme Court Act 1837.

After two failed attempts, including the Attorneys Monopoly Bill 1841, the Legal Practitioners Act 1845 added practising certificates and affirmed the Supreme Court’s regulatory power. It went without substantive amendment until 1915. Public notaries and commissioners for taking affidavits, both appointed since 1837, were regulated by their own acts (1859). Minor changes relating to legal education presaged the commencement of a law course at the new university. Special acts permitted women to practise (1911), somewhat after Victoria (1903) but well before New South Wales (1918) and England (1919), and to be notaries public (1921). Mary Cecil Kitson (afterwards Tenison Woods) was the first to use both. The Legal Practitioners Act 1936 consolidated a century’s law without major change. The Act’s modern overhaul, achieved in 1981, was a further consolidation without real innovation. Indeed, the most dynamic (even traumatic) change in legal practice came with an 1861 amendment to the Real Property Act 1857–59, which ended lawyers’ monopoly on conveyancing work by creating a new class of ‘land brokers’.

Formal separation of barristers and solicitors, attempted in 1841 and contemplated in the 1845 Act, has never been enforced. Wigs and gowns were worn according to season before the 1850s and spasmodically until 1878 when the full Westminster regalia was finally prescribed. The emerging bar’s distinctiveness was crowned by the appointment of Queen’s Counsel in 1865, though not even voluntary division was instituted until the South Australian Bar Association formed exactly a century later. Thus, before 1965 South Australia failed to contribute a member to the High Court bench; Samuel James Way and HG Alderman were the only serious candidates before this, and two subsequent offers fell through for personal and political reasons unrelated to the profession’s fused state. Only in the 1980s did the trend to join the separate bar overtake the former practice of counsel practising as partners within law firms.

Legal cliques first attempted (1839) and then formed law societies (1843, 1850) and a Law Institute or Club (1851), which all lapsed. Indifference also marked the formation of the Law Society of 1879, modelled on England’s Incorporated Law Society (1877), and dogged its first 30 years, during which less than half the state’s 113 practitioners joined.

Early attempts to enforce professional discipline were spasmodic and reflected badly on the profession’s motives. The advocate-general (1849) and the Law Club (1851) intervened in applications for admission on the basis of rumour and sectarianism, while aggrieved clients had to band together to have a lawyer struck off the roll in 1865. It took the Law Society of 1879 to bring the issue to a head – although the first victims were three of its first four secretaries. The zeal rather than realism that had motivated calls in the 1890s to democratise the profession and, in 1900 and 1910 to nationalise it, goaded the profession to protect its independence, and thus its adversarial style, by opening itself to increased public scrutiny through the Legal Practitioners Act 1915 which set up a statutory committee to inquire into complaints. Improved professional discipline and tighter reins on legal work brought about an initially dramatic increase in professional disciplinary actions. The Trust Accounts Act 1926 created new financial controls and more numerous prosecutions. By the 1980s a majority of the state’s 1000 practitioners were Law Society members. Earlier debates echoed in the Poor Persons Legal Assistance Act 1925, which appointed a ‘Public Solicitor’ to provide limited legal aid and, in 1933, in Australia’s first state-wide legal aid scheme, designed partly to keep the state’s 220 lawyers in what little work was going during the Great Depression.

This trend towards self-discipline proved cathartic and, post-war, lawyers perfected the mix of tradition and accountability that are the hallmarks of a mature profession. Entry into the modern profession maintains the seventeenth-century standard of five years’ training yet the current Legal Practitioners Act 1981, without really adding to the sum of all previous legislation, resulted from a far more open engagement with government and society than ever before. 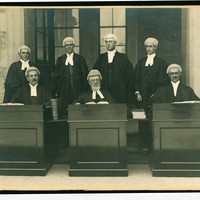