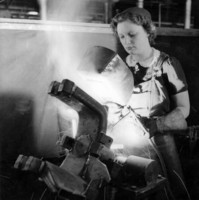 The Great Depression, coupled with the effects of a severe drought in 1927-29, affected South Australia more severely than other states. The Depression caused high unemployment and badly effected industry, particularly the motor industry. 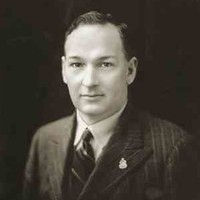 Under the premiership of Tom Playford rapid industrialisation transformed the state, with manufacturing became the core of the economy and a major source of employment.
1955

Net value of manufacturing exceeded that of the rural sector

It was not until 1955 did the net value of manufacturing production exceed that of the rural sector.

For a hundred years after Adelaide’s foundation the South Australian economy was dominated by primary production. Not until 1955 did the net value of manufacturing production exceed that of the rural sector. Yet for three decades or so from the late 1930s, largely coinciding with the premiership of Tom Playford, rapid industrialisation transformed the state. Manufacturing became the core of the economy and a major source of employment. This encouraged urbanisation and further reinforced the demographic dominance of Adelaide, while politics was dominated by the desire to promote industrial development.

The natural environment had not appeared to offer promising conditions for industrialisation. Other than an important copper industry that flourished in the nineteenth century, there were few exploited minerals that might form a base for a substantial processing industry. There were no known economic supplies of coal and most fuel was imported from New South Wales at considerable expense. By World War I manufacturing was still relatively small scale and contributed proportionally less to state employment than was the case in Victoria, New South Wales or, indeed, in Australia as a whole. It was also largely restricted to a few industrial categories: processing of rural products (notably flour milling), supplying equipment and services to local agriculture (agricultural machinery, fertiliser), processing minerals (notably, the Port Pirie complex treating lead–zinc ores from Broken Hill), or supplying local consumer demand (e.g. saddlery, printing, building materials, furniture and food and drink such as brewing, soft drinks and sugar refining).

A major feature of the 1920s was the emergence of Adelaide’s sizeable motor vehicle industry, which became the essential core of later industrialisation. Two long-established local saddlery and coach-building businesses transformed themselves into modern motor body building enterprises, Holden’s Motor Body Builders Ltd and T.J. Richards and Sons Ltd. In the previous decade both had begun to build vehicle bodies for chassis imported for South Australian customers, but in the 1920s both became major suppliers to interstate (and some overseas) markets. Each secured contracts with a variety of foreign companies, but associated increasingly closely with one overseas corporation, Holden’s with General Motors and Richards with Chrysler. Both built large new Adelaide factories, at Woodville and Mitcham respectively, and for Holden in particular the American link was a means of gaining access to the latest production technology and management methods, so that the Woodville plant became one of the most advanced in Australia.

The Great Depression in South Australia

Exacerbated by severe drought in 1927–29, the Great Depression affected South Australia more severely than other states. With sales dependent on high levels of demand and disposable income, the motor vehicle industry was especially badly hit. A virtually bankrupt Holden’s was acquired by General Motors to become General Motors–Holden’s Pty Ltd in 1931.

Recovery from the Depression was slow, but during the 1930s a series of new enterprises broadened the range of industrial activity. Kelvinator, Simpson and Son and Pope Industries all began to manufacture domestic appliances before 1939. In 1937 BHP decided to build a blast furnace at Whyalla on Eyre Peninsula, lured by the state government’s offer of continued exclusive access to iron ore leases in the Middleback Range west of Whyalla – an otherwise strange decision when it already owned two integrated steelworks in New South Wales, which could more than adequately supply foreseeable Australian demand. Several other plants were at the planning or construction stage in 1939, including BHP’s shipyard at Whyalla, a British Tube Mills factory at Kilburn and the ICIANZ works at Osborne, both in suburbs of Adelaide, and a paper-making plant in the South East.

Such developments provided the foundations for rapid expansion of industrial activity that continued almost unbroken (and usually at greater than national rates) from the late 1930s until the early 1970s. In that period an industrial economy emerged that was somewhat more diverse, with a stronger infrastructure (for example, an expanded electricity supply industry and a new coal mine at Leigh Creek). But it was still dominated by motor vehicle and domestic appliance production. Construction of new premises and rapid employment growth encouraged the geographical expansion of Adelaide to the south and north, the creation of the ‘satellite city’ of Elizabeth and the rapid growth of Whyalla.

Reasons for the Rapid Industrialisation of South Australia

There has been much speculation as to the reasons for the state’s economic and social transformation over just a few decades. The key is the rapid expansion and industrialisation of the Australian and global economies during the long post-war boom, which provided the context and established the necessary pre-conditions for South Australian developments. Yet the state’s transformation was proportionately greater than nationally, after a long history of lagging behind other states. While the reasons are complex, five groups of factors seem to be responsible.

First, World War II developments generated lasting benefits. Some industries were established in South Australia because it was seen to be secure from potential enemy attack. Large munitions plants used local labour to meet wartime needs, and many existing works (notably the vehicle factories) converted to war business. After hostilities ceased, large areas of vacant factory space and a pool of experienced (and to some extent skilled) industrial labour were important attractions to interstate and overseas businesses starved of both in the early post-war years. Second, the particular mix of industries in South Australia probably predisposed it to above average growth rates: the rapid growth of real incomes brought rising national demand for durable goods such as motor vehicles and domestic appliances, industries that were especially well represented locally.

Third, many costs (for example, for land, housing and electricity) were lower than in the eastern states and wage rates (especially for men) were below national levels. South Australia was therefore potentially an attractive location for those industries sensitive to production costs, and often gave a worthwhile competitive advantage to local producers. Fourth, despite low wages, South Australia maintained a record of good industrial relations and few strikes. Among the reasons were the low level of consumer prices (which led to a degree of prosperity), an active attempt by government and employers to involve trade union leaders in the industrialisation process, and a culture of compliance rather than industrial militancy. Again, this was attractive to many employers.

Finally, and perhaps most interesting, is the active role of government in fostering industrial development, an issue that has provoked much debate. The conventional view, much promoted at the time for electoral purposes, was that rapid industrialisation during the long administration of Tom Playford was essentially a policy creation, almost single-handedly the work of a canny premier. There was vigorous academic debate around this point in the 1980s; the political right, with its ideological stance critical of the role of the state in the economy, argued that the state administration and Playford himself were, at best, very marginal players in influencing the pattern of industrialisation.

Subsequent analysis has demonstrated that the third of a century of especially rapid South Australian industrialisation was the result of a complex web of factors, with the state government’s industrialisation strategy but one, albeit significant, strand. Playford did not initiate it and was only one player in it; others included a series of extraordinarily competent and committed – even visionary – public servants (notably the auditor-general, William Wainwright and Alex Ramsay, general manager of the South Australian Housing Trust), several local industrialists (Edward Holden and Frank Perry) and a few other politicians. Nevertheless, Playford had a central role in refining and implementing the strategy, and for several decades he was shrewd, strategic, opportunistic and cunning in seeking to influence industrial decision-makers (and Commonwealth government policy-makers) to South Australia’s benefit. Detailed examination of specific cases shows great variations in the mix of issues involved. In some cases, state policy and Playford’s actions ‘made the difference’, to the benefit of South Australia; in others, these influences were irrelevant; in still others, benefits were limited, with several new businesses quickly closing or transferring interstate.

South Australian industrialisation was close to its peak by the end of Playford’s premiership in 1965, although manufacturing employment continued to grow, generally at greater than national rates, for nearly another decade. From the mid 1970s, however, circumstances changed dramatically as Australian manufacturing moved to a period of restructuring, job loss and rationalisation. For most of the last quarter of the twentieth century this picture dominated in South Australia. Generally, South Australia’s losses were greater than elsewhere, so that in some ways the state is – just as in the first quarter of the century – an increasingly marginal industrial player. Manufacturing is very limited in range (motor vehicles and domestic appliances remain, but are vulnerable) and largely owned from outside the state while generating an ever smaller fraction of the state’s employment and economic activity. South Australia’s losses (around one‑third of manufacturing jobs since 1974) were somewhat greater than elsewhere. 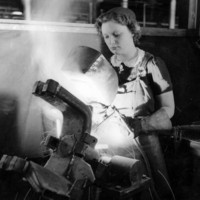 Image courtesy of the State Library of South Australia, SLSA: B 7798/432, Public Domain 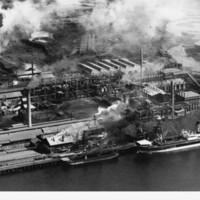 Image courtesy of the State Library of South Australia, SLSA: B 8564, Public Domain