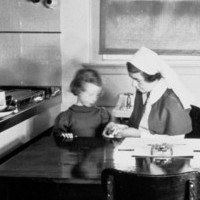 The city’s sewering in 1884–85 was followed by a sharp but unsustained drop in mortality rates.
1973

Established by the Commonwealth in 1973, this funds multidisciplinary Community Health Centres.

South Australians are, according to orthodox measures, a healthy lot. In 2011 their life expectancy at birth was about 79 years for men and 84 years for women. Serious illness and death are characteristically associated with chronic conditions and generally compressed into the later years. This represents a marked change from the pioneering era of the colony, when infectious diseases kept mortality rates high, especially among infants.

Good health, but not for all

The aggregated data, however, conceal significant socio-economic differences: as in the past, the poor still experience more illness and die younger than the rich. This persistent pattern of poorer health as a result of social and economic disadvantage is most marked among Aboriginal South Australians. Their health status, signified by a life expectancy about 12 years (males) and 10 years (females) below that of the non-Aboriginal population, and an infant mortality rate 2½ times as high, reflects both historic and current economic and social marginalisation.[1] In terms of morbidity and mortality rates, levels of education, employment, housing and income – as well as other measures of well-being which many Aboriginal people value, including access to land and the maintenance of language and ceremonial life – they are significantly disadvantaged. These realities seriously qualify all claims about the good health of contemporary South Australians.

[1] Note that this life expectancy gap is much lower than the 17 years that is frequently claimed. This is artefactual, reflecting a recent change in the methods used by the Australian Bureau of Statistics to calculate indigenous life expectancy rather than an actual improvement in health (Australian Institute of Health and Welfare, pp232–34).

In the 1840s life expectancy at birth of the settler population was about 40 years, with infant deaths accounting for half of all deaths. Loss of life was frequently due to infectious diseases. In the first year of life, gastroenteritis was the most formidable, followed by respiratory diseases and whooping cough, and, among 1–4-year-olds, diphtheria. Epidemics of other infectious diseases, including measles and typhoid, caused sudden upswings in mortality rates. By the 1880s some were endemic in Adelaide, and control was attempted via sanitary reform. The city’s sewering in 1884–85 was followed by a sharp but unsustained drop in mortality rates. For the rest of the century rates remained higher in Adelaide than elsewhere in the colony and in most other Australian cities.

Epidemics engendered professional and public debate about the causes of disease and whether health problems were the responsibility of individuals, communities or governments. As in Britain and the other Australian colonies, miasma theory, which held that disease was generated by foul smells emanating from decaying matter, gave way to various forms of contagionism, according to which disease was transmitted from the sick to the healthy by particles. By the end of the nineteenth century modern germ theory, based on the identification of microbial agents responsible for specific diseases, was taught in the University of Adelaide’s Medical School, influenced practice in South Australia’s hospitals, informed public health legislation and was the basis of local government public health activities.

By 1900, mostly as a result of public health reforms, overall mortality rates had fallen to about 15 per 1000 and life expectancy had reached 55 years for men and 59 for women. This improvement mainly reflected a saving of adult life, as infant mortality remained at about 100 per 1000 live births. Among adults, tuberculosis continued to be the biggest killer, although non-infectious, age-related conditions were becoming more significant. Injury, accidents and violence were also major causes of death, especially of males, and have so continued. Childbirth was responsible for the deaths of about six women in every 1000 live births in 1900. This rate did not fall significantly until the 1930s when the availability of antibacterial drugs, in addition to improved medical and nursing care, together with better nutrition and general health brought about a dramatic improvement. By the end of the century maternal mortality was very rare in South Australia and the nation.

This saving of adult lives produced gradual population ageing. The proportion of Australians aged 65 and over had risen from 1% in 1861 to 4% by 1901. Life expectancy at older ages increased dramatically in the latter part of the twentieth century, reflecting declining mortality from diseases such as heart disease and stroke. The 2006 census revealed that South Australia had the oldest population in Australia, with 15.4% of the state’s population being 65 years and over, compared to 13.3% nationally. This has implications for health services planning and expenditure, especially as the greatest growth is occurring among the ‘older aged’ among whom reduced mortality is offset by increased morbidity.

Infant mortality began to improve from the first decade of the twentieth century. While this advance has often been attributed to infant welfare services, more fundamental determinants included fertility control, the extension of public education, safer milk supplies, social security measures, the basic wage and generally rising standards of living, together with, eventually, more effective medical services. For the period 2003–07, infant mortality rates for non-Aboriginal South Australians were about four per 1000 live births.

From the beginning of European settlement in South Australia, health care has been provided through a combination of government, charitable and private services, which have operated in a changing context of ideas about sickness and health. Throughout the nineteenth century an array of qualified and unqualified, orthodox and unorthodox health care practitioners jostled for shares of an unregulated market, offering services and products for which they often made extravagant claims. From 1860 the South Australian Advertiser ran a medical column advertising patent medicines said to cure long alphabetical lists of ailments, backed by the testimony of respectable medical men and grateful consumers. Such health care flourished because orthodox medicine, offered by qualified doctors in private practice, was neither especially efficacious nor universally accessible in terms of cost or location. Hospitals, which provided another means of accessing medical care, were frequently dangerous places, patronised chiefly by the poor who could not afford the safer alternative of private medical and nursing care. By the end of the nineteenth century, however, qualified mainstream medical practitioners were establishing a competitive edge as a result of improved education and training, association with science and influence within social and political elites. They succeeded in marking out their occupational territory and restricting others from trespassing on it via legislation and the mechanism of professional registration. In the early years of the twentieth century therapeutic efficacy and surgical capacity grew, hospitals became safer and medical and nursing education improved, assuring the dominance of orthodox medicine over its competitors. The recent resurgence of interest in alternative therapies, and their attempts to legitimate themselves in terms of scientific rigour, reflect both the continuing influence of scientific orthodoxy and popular disenchantment with what it has offered.

Services dealing with mental health problems have been constrained by the desire to balance the needs of those suffering from mental illness with concern for the maintenance of public order. In the early colonial period this balance was clearly tipped in favour of maintaining public order. This was achieved by involuntary detention, largely unconnected with treatment, which failed to distinguish between the mentally ill and a range of social misfits. The later nineteenth century promise of moral therapy and the asylum movement was never fully realised, and the Parkside Lunatic Asylum (later Mental Hospital), established by the government in 1870, quickly became a primarily custodial rather than therapeutic or rehabilitative institution. In the twentieth century the development of modern diagnostic categories of psychiatric illness led to care and treatment regimens related to specific diagnoses. By the 1950s drug therapy offered an alternative to physical restraint and to the imprecise ‘shock treatment’ and experimental psychosurgery of the 1940s, making possible the management of some mentally ill people in non-institutional settings. This development, together with growing concerns about the inhumanity and clinical inefficiency of mental institutions, encouraged deinstitutionalisation, powerfully symbolised by the demolition of the Parkside Mental Hospital’s walls from 1962. However, inadequate funding of community services meant that the needs of ‘deinstitutionalised’ patients were not always met, and negative reactions to the policy, reflecting old concerns about threats to public order, surfaced. A proliferation of private psychiatric and psychological services since the 1970s has offered some alternatives to state-funded mental health services, but only to those with the capacity to pay for them. Successive iterations of a national mental health plan since 2000 have reinforced a positive focus on the promotion of mental health and improved access to community mental health services. Public campaigns, often associated with high-profile personalities, have drawn attention to common mental health issues such as depression, psychosis and suicide in an attempt to decrease stigmatisation and encourage prevention and early intervention. Perhaps most significantly, private psychological and other mental health services, once beyond the financial reach of many, are now more accessible through the nationally subsidised ‘Better Access’ program. Despite these developments, the mentally ill remain among the most disadvantaged and vulnerable members of the community.

Who should pay for what?

Debates persist about payment for and access to health services. In the late nineteenth and early twentieth centuries friendly societies such as the Manchester Unity of Oddfellows and the Independent Order of Rechabites made doctors’ services available to many more people than who otherwise would have been able to afford them. However, only since the mid-1970s and the establishment of universal health insurance (Medibank then Medicare) have South Australians been assured of access to doctors and hospitals on the basis of need rather than capacity to pay. Even so, services are often hard-pressed to meet demand, and since other forms of mainstream health care, such as dentistry and physiotherapy, operate outside the universal insurance system, access to them remains unequal. An important attempt to provide accessible, broadly based health services is the Community Health Program. Established by the Commonwealth in 1973, this funds multidisciplinary Community Health Centres, which provide free-at-the-point-of-delivery individual health services as well as illness prevention and health promotion activities. The program, however, is constrained by limited funding and has not seriously challenged the focus of the biomedical paradigm on individual, curative, medical interventions.

Recent Commonwealth governments, despite a professed commitment to universal health insurance, have provided citizens with financial inducements to maintain or take up private health insurance: nearly half of the South Australian population has made this choice since 2000. While supporters claim private health insurance allows Medicare to function effectively, opponents see it as undermining the concept of universal provision through maintaining a two-tiered system based on capacity to pay rather than on need.

A matter for continuing debate 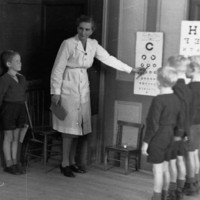 Students at Thebarton Primary School having their eyes tested, 1945. 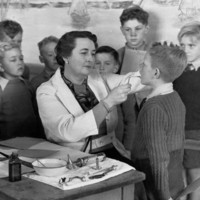 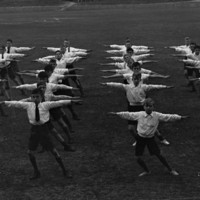 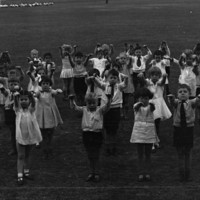 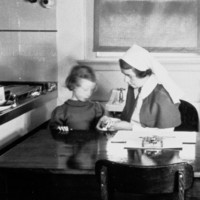 Girl with nurse in the Children's Welfare Department medical centre. 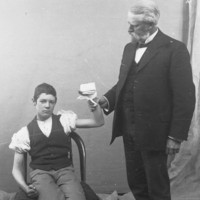 Raftery, Judith, ‘The social and political context’ and ‘Health policy development in the 1980s and 1990s’ in Fran Baum ed., Health for all: The South Australian experience (Adelaide: Wakefield Press, 1995)

Raftery, Judith, Not part of the public: Non-indigenous policies and practices and the health of indigenous South Australians (Adelaide: Wakefield Press, 2006)